New testimony about the shooting down of MH17

Interesting news this morning: the Russian newspaper Komsomolskaia Pravda has interviewed a man who claims to have been a witness to the take-off of three aircraft one of which allegedly shot down MH17. Thanks to the incredible work done by Kazzura the full video with English subtitles is already available today.


I will notice that there are several mutually contradictory versions circulating out there. For example, one version spoke of a Polish pilot, this one speaks of a Ukrainian (with a very Russian last name), some versions speak of one aircraft, other of two and this one even three, some speak of a SU-25, others of a MiG-29 or even a SU-27 (such as the alleged satellite photo from the student at MIT). There are several reasons for such discrepancies.

For one thing, coming up with a "testimony" is a surefire way to make money. Second, some witnesses might have seen something but not paid attention at the time and then "reconstructed" what they saw. Finally, witnesses are like the folks holding different parts of the elephant - they see only a part of the bigger picture.

I have to say that I still am basically sticking with the version I put forth on August 4th: MH-17 was shot down by a single SU-25, guided towards its target by the long-range "Kupol" radar of a BukM1 battery who engaged MH17 with a single R-60 infrared-guided air-to-air missile which it one of the engines and then who "finished off" MH17 with a volley of gunfire for its canon. Still, I have to add two things:

a) it is possible that even though only one SU-25 engaged MH17 there were another two loitering nearby to make sure to intercept MH17 because the problem with flying an SU-25 at high altitude is not that it cannot get high enough, but that at high altitude the engines of the SU-25 (which are designed for close air support or "tree hugging") cannot provide much speed thus the flight envelope of a SU-25 at altitudes around 7'000m-10'000m is very narrow.

b) I am aware of the version that Kolomoisky had hired Ukrainians pilots to shoot down Putin's Presidential Aircraft, but I cannot imagine why they would not have been aware that the transponder of MH17 was signaling that this was a totally different aircraft regardless of the fact that the two aircraft externally appeared similar. Unless that is explained to me I cannot endorse this version.

One thing I am 99% sure of is that MH17 was not downed by a surface-to-air missile like the BukM1 because of the highly visible column of smoke left by such a missile which lingers on for a long time (up to 30min depending one wind conditions). The launch is also very noisy. So while we have seen the recent testimony of a Ukrainian solider who confirmed that the Buk # 312 allegedly belonging to Russia was, in fact, Ukrainian, I do not believe that this Buk was actually used to shoot down MH17.

What is absolutely certain is that the US, the UK, Holland and pretty much all the parties involved are busy covering up what happened and trying to delay any possible relevant findings as much as possible. The only country which is still demanding an independent investigation is Russia which, by itself, tells me all I need to know about "who done it".

“Investigators have talked to the editor-in-chief and journalists of the ‘Komsomolskaya Pravda’ newspaper and have taken the contact details of the Ukrainian citizen [cited in the report],” spokesman for the committee Vladimir Markin said.

He added that the witness would be interviewed as part of the Russian investigation into the use of banned weapons and methods of warfare in Ukraine. The information he shares will be cross-checked, he added.

The witness, who chose to remain anonymous, told Komsomolskaya Pravda (KP) daily that a pilot of a Ukrainian Su-25 fighter jet was behind the MH17 flight downing on July 17. He claimed that the pilot used air-to-air missiles to shoot down the Malaysian Boeing, which he concludes was probably mistaken for a military plane.

“About an hour before the catastrophe, three fighter jets took off [from Dnepropetrovsk]. One of the planes was an Su-25, which was equipped with these kind of [air-to-air] missiles,” the witness told KP in an interview, adding that he was on the airport grounds at the time.

Once the surviving pilot got out of the plane, he looked “very frightened.”

The Ukrainian pilot’s first words as he got out of the jet were: “Wrong plane,” the alleged witness claimed. Later in the evening that same pilot also reportedly stated: “The plane happened to be in the wrong place at a wrong time.”

While the daily could not immediately verify the interviewee’s claims, its readers soon discovered the allegedly involved pilot – Vladislav Voloshin – is real, and has been awarded for his role in Kiev’s so-called “anti-terrorist operation” in eastern Ukraine.

Back in July, the Russian military said that it detected a Ukrainian Su-25 fighter jet gaining height towards the MH17 Boeing on the day of the catastrophe.

“A Ukraine Air Force military jet was detected gaining height, its distance from the Malaysian Boeing was 3 to 5km,” said the head of the Main Operations Directorate of the HQ of Russia’s military forces, Lieutenant-General Andrey Kartopolov.

Kartopolov added that the presence of the Ukrainian military jet could be confirmed by video shots made by the Rostov monitoring center.
MH17 flight crashed in eastern Ukraine on July 17. All 298 passengers and crewmembers on board the Boeing 777 were killed. The victims were from 10 nations, while most of the passengers – 193 in total – were from the Netherlands. The second-largest number of casualties, 43, was from Malaysia.

Dutch Broadcaster Claims to Have Proof Showing Real Reasons of MH17 Crash
The Dutch broadcaster RTL Nieuws claims that it possesses photos proving that the MH17 crash was caused by an anti-aircraft missile fired from the ground, the Dutch NL Times reported Tuesday. 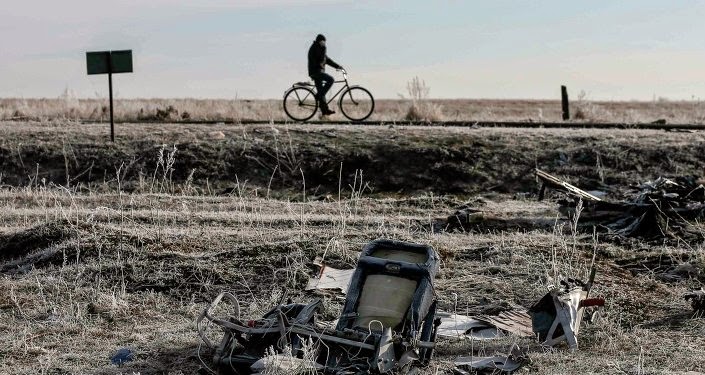 The Dutch broadcaster RTL Nieuws has said that it possesses photos that prove that the MH17 crash was caused by an anti-aircraft missile fired from the ground, the Dutch NL Times reported Tuesday.

According to the newspaper, the Dutch TV channel has obtained three photos taken near the crash site. The first two show "a vertical plume," coming, supposedly from the place where the missile was launched. The third depicts "a large black plume of smoke" from where the aircraft fell.

"I photographed that white line. At the time I did not know what it meant. For me it was just a white stripe: from the horizon up to the clouds where it disbanded. Only later it became clear what it was," the photographer who took the pictures told RTL, as quoted by the NL Times. The camera was handed to the international crash investigation commission. RTL did not publish the pictures to protect the photographer's identity.

On July 17, a Malaysia Airlines Boeing 777 flying from Amsterdam to Kuala Lumpur crashed in Ukraine's eastern region of Donetsk killing all 298 people on board. In September, the Dutch Safety Board, heading the investigation into the crash, issued a preliminary report suggesting that the passenger plane had been hit by "a large number of high-energy objects." Kiev accused local pro-independent forces of the attack, who, in turn, claimed they do not have the weapons capable of shooting down a plane flying at 30,000 feet.

Late on Monday, Russia's Komsomolskaya Pravda newspaper published an interview with a Ukrainian airbase employee, who claims to be an eyewitness of the crash. He said that on the day of the crash a Ukrainian Air Force Su-25 (Frogfoot) attack aircraft took off from an airbase in the eastern city of Dnipropetrovsk carrying air-to-air missiles and returned without them. The Russian Investigative Committee has already established contact with the man and plans to question him in the nearest future.

Earlier in December, the Security Service of Ukraine said the Netherlands would release the progress report on the crash before the end of 2014 and that the inquiry would be continued throughout 2015.