What Is the Best Way to Tackle Putin?
BY JAMES NIXEY 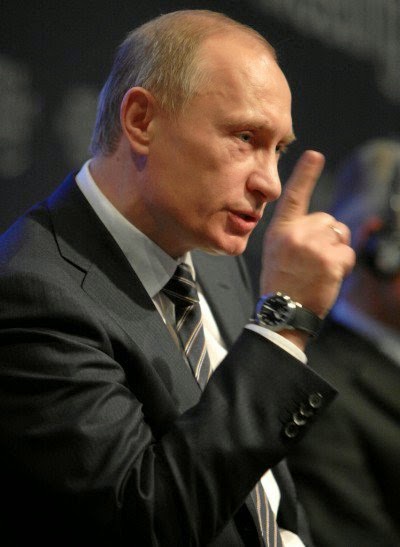 You wouldn't know it to judge from Vladimir Putin's professional, experienced three-hour session with journalists December 18, but it has been a disastrous week for the president, for his small but influential elite coterie and for the 144 million Russians beyond the Kremlin walls.

Most Russians have found that their savings and their disposable cash are worth significantly less than they were at the beginning of 2014. Considering that 15 percent of Russians live below the poverty line, that its middle class takes up another 20 percent and that the vast majority of the rest of the population falls somewhere in between the two, this week has reawakened memories of the economic instability and widespread impoverishment in the 1990s.

Emergency measures appear to have halted the free fall, but the situation is still perilous because the underlying economic problems remain, in particular the overdependence on the price of oil (Putin's one-note self-criticism at his press conference, when he broke from blaming the West), the lack of investment and the absence of any credible strategy for addressing them.

Too many rubles spent on defense

The solution is a difficult one for the current leadership. Meaningful economic reforms would initially bring about even harsher living conditions for several years ahead. But they would also require political reforms that would ultimately undermine the Kremlin's model of statist power. An about-face on Ukraine would halt the sanctions, but it wouldn't come to grips with the problem and it will not happen anyway.

One option often mooted is to bring back Alexei Kudrin, the Western-friendly former finance minister, into the government. But Kudrin resigned precisely because he believed that the Kremlin was shoveling too much money into defense and not enough into pensions. Either Kudrin or Putin would have to compromise for this to work.

The Kremlin's solutions still appear to be technical adjustments rather than fundamental reform. As a result, the benefits will be limited and almost certainly inadequate to the challenge.

In the West, Russia's most recent economic catastrophe is terrifying to many and met with satisfaction by others: just deserts for dismembering Ukraine and its indirect culpability in the downing of Malaysia Airlines Flight MH17. That is perhaps understandable yet unworthy, because it affects those who were not responsible in far greater numbers than it affects those who were.

Western sanctions have not targeted Russia's elite nearly well enough; there, they would have a more punitive effect on decision makers but less punitive effect on most Russian citizens (yes, even if 85 percent of them support Putin's policies).

Indeed, while Russia's leader remains remarkably in vogue, his surrounding elite and the oligarchs have never been much liked. Targeting them would be a popular move with the Russian population at large, but targeting the wider economy may backfire.

Better-directed sanctions may—just may—have more effect, as they could also increase pressure on Putin, not so much to reverse course, which, as previously stated, seems improbable, but to make his position more uncomfortable and further limit his maneuvering freedom.

What if Putin were to be ousted?

The question then arises as to whether increasing pressure on Putin is even desirable. It's a fair question, as are the following ones: What if his position became untenable and he was forced out of office? Could there not be worse around the corner?

There is no intellectual rationale for this, and Western inaction has consequences just as much as Western action (or sanctions) does. You can never prove an alternative history. Sanctioning Russia may prove disastrous. Or it could be a turning point for a better relationship. Putin's involuntary departure could herald worse—or it could be a new dawn.

In the absence of clear evidence, the logical approach is to abandon policies that have not worked over a period of time. What has definitely failed is the 20-year policy of drawing Russia into the wider international community without penalty if it contravenes the standards required of membership.

There are no certainties, but some clear messages would surely help: If you break club rules, there will be consequences; as long as you remain in Ukraine, sanctions will stay in force; and manifest lies about Western plots against Russia will be shown to be false. And finally, if you do decide to restart the long trek back to the (imperfect) West, we'll be your friend and help.

James Nixey is head of the Russia and Eurasia Programme at London's Chatham House, the Royal Institute of International Affairs.

CNN reaches an all-time low.
That day when CNN dissed the Russian government for working through the holidays...in the midst of an economic and geopolitical crisis

No doubt the author will be pleased to learn that the ruble has recovered its position since this article was written.


From Russia with no love:

Vladimir Putin delivered a lump of coal in the Kremlin's stocking this year when he announced Thursday that he has canceled holiday vacations for members of the government.

Russia's President delivered the bad news at a December 25 meeting he convened of his government, but for those thinking that his timing was merely the diabolical twist of a maniacal scrooge, Christmas is celebrated in Russia on January 7, the traditional date in the Eastern Orthodox Church.

"The Government and its various structures cannot afford such extensive holidays, at least not this year," Putin told government ministers in a speech broadcast on state television. "You know what I am talking about."

He was talking about Russia's battered economy.

"We have been making efforts to change the structure of our economy, to refine it and make it more innovative ... quite a lot has been done in this direction," he said. "However, recent events show that this is not enough."

It was a change in tone from just a week ago, when Putin largely blamed the West for Russia's woes, even suggesting a U.S.-Saudi conspiracy theory to bring down oil prices at his annual press conference.

At Thursday's meeting, however, the President admitted at least some fault

"The difficulties we have come across are not only of an external type. They are not only due to some sanctions or limitations caused by the global market situation -- they are also the result of our own shortcomings that have piled up over the years."

The reality, whichever way you want to pin it -

How Putin’s popularity
grew in 2014 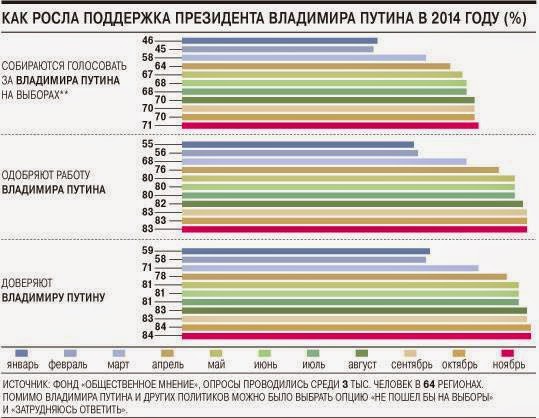