Travel chaos in England as 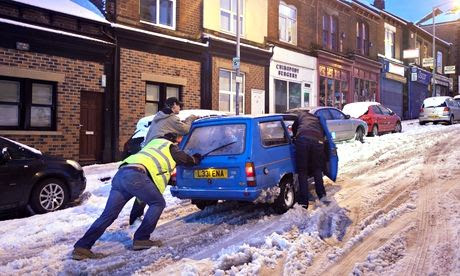 People push a car in Sheffield after the city is deluged by snow. Photograph: Tom White/PA

Heavy snow and gale-force winds have caused major disruption to travellers across the UK, with flights delayed, cross-channel ferries suspended and motorists stranded.

The north of England was worst hit by the cold snap, with blizzards closing Leeds Bradford International airport in Yorkshire and Liverpool’s John Lennon airport for several hours while flights at Manchester airport were also delayed on Saturday.

The freezing weather also brought treacherous conditions to roads, with many motorists in Sheffield forced to abandon their cars overnight after snow left roads impassable.

A band of wet, cold and blustery weather crossed England from Merseyside and north Wales through the Midlands and Yorkshire. The north and the Midlands were worst hit by the snow, with 11cm (4.3in) falling in Leek, Staffordshire.

Nottinghamshire and Bingley, near Bradford, saw flurries of up to 7cm (2.8in).
Motorists have been advised to check ahead before travelling, and in some parts to avoid journeys unless they are essential.

To compound problems, all trains from King’s Cross station in London to the north were cancelled due to overrunning engineering works. Network Rail described the delays to its £200m investment programme as “regrettable and unfortunate”.

Winds of up to 160km/h (100mph) also forced the French port of Calais to shut and the suspension of car ferries to and from Britain, officials said.

“No vessel is entering or leaving. All sea traffic is halted,” an official at Calais’ port authority told Agence France-Presse, adding that ferries currently in Dover on the other side of the channel were staying there.

Thousands in the Midlands were left without electricity as heavy snow brought down power lines. The Met Office warned that more snow may fall on Saturday, but added that the major threat would be from ice, which would affect almost all of the country. 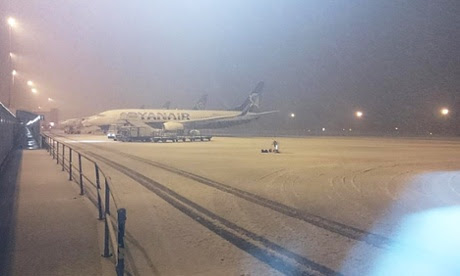 A Western Power Distribution spokesman said 36,000 customers were left without power and another 69,000 had short interruptions to supplies throughout the Midlands and the south-west.

Staff worked through the night to reconnect customers, but around 3,000 in the east Midlands remain affected.

John Lennon and Leeds Bradford International airports reopened on Saturday after their runways were cleared of snow. But a spokesman for the Liverpool airport warned that knock-on disruption was expected. “We have had quite a deluge here,” he warned.

Sian Perrin wrote on Twitter: “Waiting for de-icing truck & been told there aren’t enough! Will now miss connection to Prague. Lufthansa doing all they can.”
Laura Thornhill wrote: “What’s the delay? Been sitting on the plane for over an hour - no update no refreshments poorcustomerservice.”

Wiriting on Twitter at around 2.30am, one driver near Sheffield said he had been in a queue for more than four hours.

A coachload of people travelling from Sheffield to London had to take refuge in a church after their bus became stuck in the snow before leaving the South Yorkshire city, passenger Chloe McIntosh told the BBC.

She said: “Some people from the houses nearby have come and offered us tea. Then they opened up the church.” 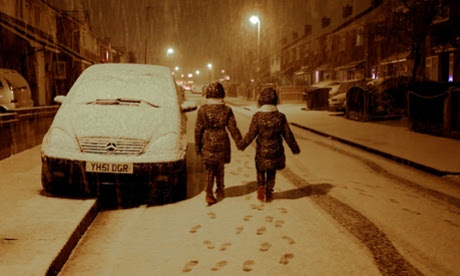 Staffordshire police tweeted: “Reports of difficult road conditions across Staffordshire due to snow. Please only travel tonight if necessary.”

Leicestershire police tweeted: “Snow causing disruption in the north of the county. Please only travel if absolutely necessary and avoid A1 as large vehicles are stuck.”

Snow had been predicted to fall in parts of north Wales, the north-west and the Midlands, with a Met Office amber alert in place and a yellow warning of snow across swaths of the UK since Friday morning 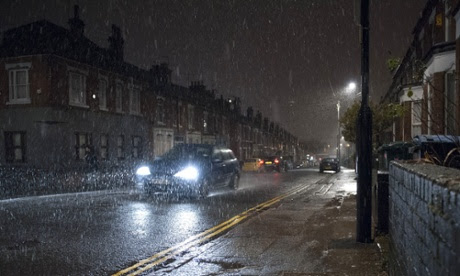 A Met Office spokeswoman said on Saturday that the Pennines and Peak District also saw plenty of snow, adding: “The snow is probably peaking at the moment. It should ease off over the course of the next few hours.”

The Met Office earlier warned that there was a 90% chance of severe cold, ice or snow in parts of England between this afternoon and New Year’s Eve.

An area including Scotland, Northern Ireland, Wales, the Midlands, East Anglia, the north-west, Yorkshire and as far south-east as London and Kent has been put on a separate yellow alert for snow.

Christmas night was the coldest night of the year so far, with -8.5C (16.7F) recorded at Braemar in Aberdeenshire.

Temperatures could also drop as low as -10C (14F) in some places at the start of next week as clearer skies arrive.

A Department for Transport spokesman said: “As winter weather grips some areas of the country we would advise people intending to travel to check weather and local conditions before they set out.

“The Highways Agency and local highway authorities across the country are working hard to ensure disruption is kept to a minimum.”

Snow to Bury, Slow Travel in

A storm will spread rain and disruptive snow from parts of France and Italy to northern Greece and Ukraine from Sunday into Monday.

The storm has already delivered rain and wet snow to the United Kingdom Friday night.
As the storm continues to move southeastward, accumulating snow will fall in some areas and a widespread swath of disruptive snow will target southeastern Europe into the beginning of the week.
Areas from Italy into the Balkans will be the hardest hit. While the snow will be a boost for skiing in Europe, it will lead to travel problems for holiday travelers as flight delays are likely and highway travel will be slowed. 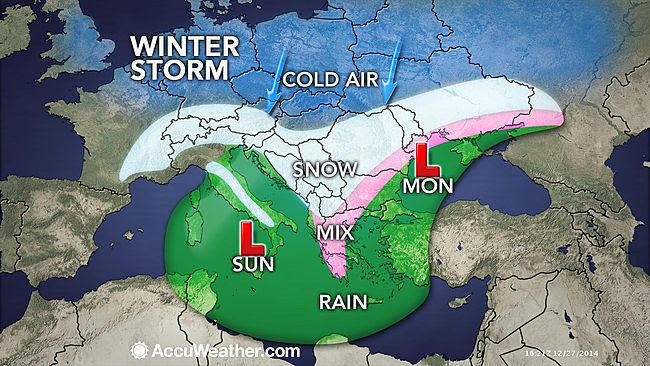 The heaviest snow from the storm is expected to fall in the Dinaric Alps and from eastern Romania into Moldova. The combination of snow and wind in these areas will make roads impassible in some region. Heavy snow will also fall in the Apennines across central Italy. 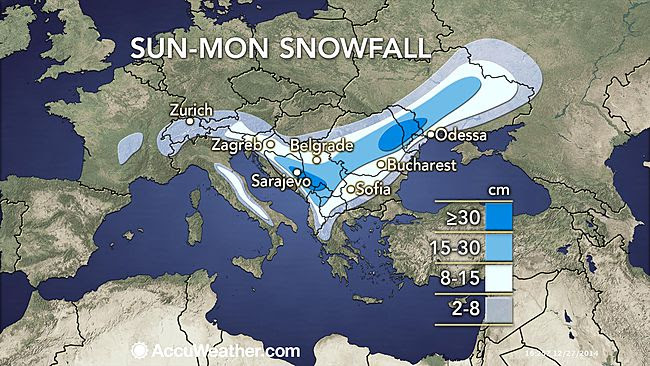 This snowstorm in the Balkan Peninsula will be on the heels of the most recent snowfall that occurred earlier in the weekend. This will only compound travel issues.

Any roads and sidewalks that are not cleared of snow from the first storm will become even more difficult to travel on when the second storm rolls through.
AccuWeather.com Meteorologist Adam Doury and Senior Meteorologist Alex Sosnowski contributed content to this story.

The Malaysian government has come under fire for not declaring a state of emergency to help devastated communities as the country faces its worst flooding in a decade.
Five people have been killed in the floods, mass evacuations have been ordered in north-eastern Malaysia, and forecasters are now predicting heavy rain in previously unaffected southern parts of the country. 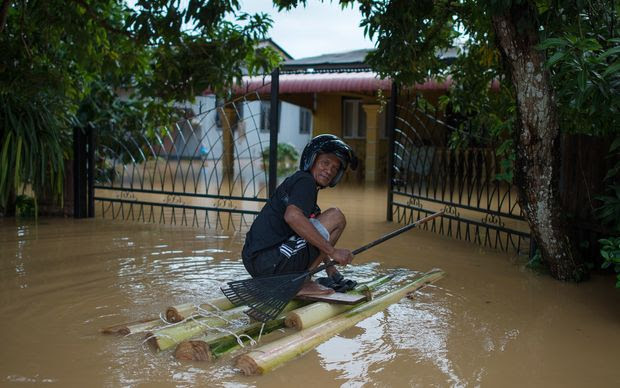 A Seasonal flooding hits Malaysia every year and regularly forces tens of thousands from their homes, but the latest floods are the worst since at least 2004.

Prime minister, Najib Razak, has cut short an overseas trip to visit the area hardest-hit, the state of Kelantan,
Mr Razak had come in for criticism after being pictured on social media playing golf with the American president, Barack Obama, in Hawaii while the flooding worsened.

Rescuers struggled on Saturday to get help to the tens of thousands of people affected by the flooding
The number of people forced to flee their homes climbed past 120,000 with weather forecasters warning of no respite for the northeastern states of Kelantan, Terengganu and Pahang.
From the air, parts of Kota Bharu, the state capital of badly-affected Kelantan, resembled a vast, muddy lake, with row after row of rooftops peeking out of the murky waters.
Tempers were frayed among people sheltering at a crowded relief centre just outside Kota Bharu, with fears the situation would worsen as it continued to rain in surrounding areas.
"I am angry with them (the government). We don't care about their politics. We just want the government to do what they should do and help us," 23-year-old Farhana Suhada, who works for a courier service, told AFP.
Holding on tightly to her six-month-old baby, she said: "For breakfast I had three biscuits and tea. There's not enough water and no food at all for my baby. I had to buy my own milk." 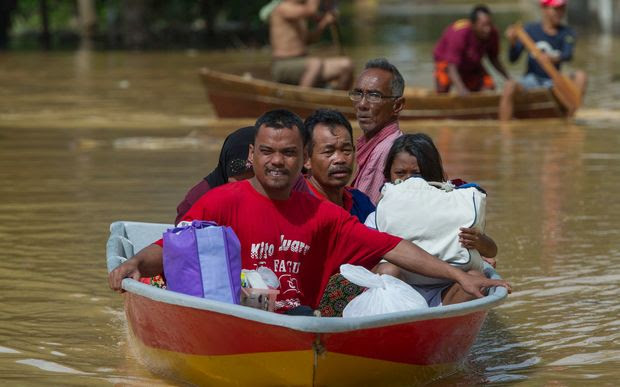 Farhana was forced to abandon her home four days ago after flood waters rose quickly almost to neck level.
Mr Najib, meanwhile, arrived in Kelantan to lead the national flood response after cutting short his vacation in Hawaii and was expected to meet flood victims.
The massive flooding, caused by torrential northeast monsoon rains, has so far left five people dead.
The region is regularly hit by flooding during the annual monsoon, but this year's rains have been unusually bad.
Deputy Prime Minister Muhyiddin Yassin conceded that rescuers were struggling with power outages and roads being washed away by the floods.
"I admit the situation is challenging to the rescue workers and we are trying our best to make sure that the food arrives to the victims depending on the flood situation," he was quoted as saying by the Star newspaper.
Military helicopters and trucks were seen in the Kota Bharu area, which is near the border with southern Thailand, but rescue efforts were being hampered by fast rising waters and strong currents while roads to hard-hit areas were impassable.
"The severity and scale of the floods had taken the authorities completely by surprise as it was worse than anticipated, overwhelming all disaster management plans and preparations," Lim Kit Siang, veteran opposition MP with the Democratic Action Party said in a statement Saturday.
Kelantan, one of the worst-affected areas, is led by the opposition Pan-Malaysian Islamic Party (PAS) and is one of the poorest states in the country.
At one relief centre, flood victims were seen lying on the ground while children ran around.
The Universiti Sains Malaysia hospital, located in Kota Bharu, was busy handling flood victims flown in from nearby areas -- including a pregnant woman from Pasir Mas district where strong winds and currents have made rescue operations difficult.

Floods and mudslides triggered by heavy rain have killed at least 14 people in Sri Lanka and driven 80,000 from their homes, police and officials said Friday, as the country marked the 10th anniversary of the tsunami.

Police said at least 10 people were killed in mudslides in the central region where 38 people lost their lives in a similar disaster in late October.

Four other people drowned in flooding triggered when authorities opened the sluice gates at a number of reservoirs to reduce pressure on their dams.

Authorities deployed troops to assist with relief operations for around 80,000 people whose homes were flooded or damaged by two days of unusually heavy rains.

The meteorological department issued a severe weather warning over the floods, which came as Sri Lanka held commemorations for the 31,000 people killed there when the Asian tsunami hit in 2004.