Chinese army for disputed islands
China's most powerful military body has approved the deployment of a garrison of soldiers from the People's Liberation Army to guard disputed islands claimed by China and Vietnam in the South China Sea. 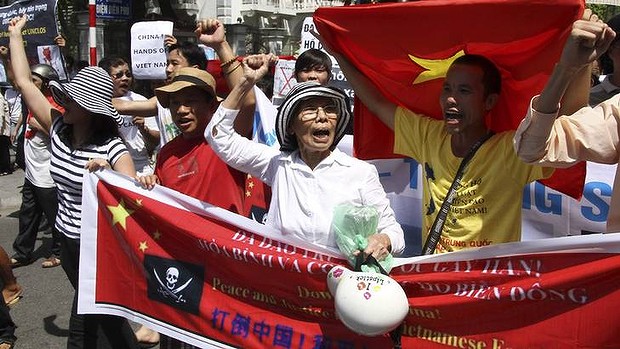 The troop deployment appeared intended to reinforce China's claims over the South China Sea and its potential energy resources.

The moves came a week after a meeting of foreign ministers of the Association of South-East Asian Nations in Phnom Penh, at which China, according to diplomats at the meeting, used its influence to stop even a rudimentary communique on the South China Sea among the 10 ASEAN nations.

On Monday, 45 legislators elected over the weekend to govern the 1100 people who live on the island groups of the Spratlys, the Paracels and the Macclesfield Bank, had their first official meeting, Chinese authorities told state media.

The new legislators will not only govern the island groups, many of which consist of rocks and atolls, but also about 2 million square kilometres of the South China Sea over which China claims jurisdiction, state media said.

The establishment of a legislature for the islands and the Central Military Commission's troop dispatch will antagonise Vietnam, which claims the same islands. Vietnam and China have fought since the 1970s over the three island groups. Last month, Vietnam passed a law that claimed sovereignty over the Paracels and Spratly islands. In response, China called the islands its ''indisputable'' territory.

The Philippines and China have also been involved in a dispute for months over Scarborough Shoal, an area off the coast of the Philippines claimed by both countries.

On Monday, President Benigno Aquino of the Philippines said his country would not back down from its dispute with China, saying in an address that the nation's military would get dozens of new aircraft and ships for defence of the shoal, which Manila identifies as Bajo de Masinloc.

''There are those who say that we should let Bajo de Masinloc go,'' Mr Aquino said.''But if someone entered your yard and told you he owned it, would you agree?''

Taiwan, Malaysia and Brunei also have conflicting claims in the South China Sea, making the area a source of a potential military showdown. With the Spratlys, the Paracels and the Macclesfield Bank, China's State Council approved the establishment of a prefectural-level administration known as Sansha City to replace a lower county level administration last month.

The election of the legislators and their meeting at a first session of a people's congress appeared to be practical steps to show that China was serious in its drive to put much of the South China Sea under its domain.

The speed of China's actions was not surprising, said Wu Xinbo, deputy director of the Centre for American Studies at Fudan University in Shanghai.

''Now the Philippines and Vietnam are both advancing their claims so China must also respond accordingly with its own plan,'' Mr Wu said.