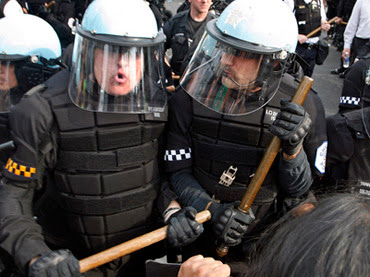 The DHS submitted a rushed solicitation to the Federal Business Opportunities site on Wednesday, which is a portal for Federal government procurement requisitions over $25,000. The request gave the potential suppliers only one day to submit their proposals and a 15-day delivery requirement to Alexandria, Virginia.

As the brief explains, “the objective of this effort is to procure riot gear to prepare for the 2012 Democratic and Republican National Conventions, the 2013 Presidential Inauguration and other future similar activities.”

The total amount ordered is about 150 sets of riot helmets, thigh and groin protectors, hard-shell shin guards and other riot gear.

Specifically, DHS is looking to obtain:

The riot gear will be worn by Federal Protective Service agents who are tasked with protecting property, grounds and buildings owned by the federal government.

The urgency of the order can be explained by the fact that there is a growing anticipation that many demonstrators will travel to the Republican National Convention (RNC), scheduled for August 27-30 in Tampa Bay, Florida, and Democratic National Convention (DNC), planned for September 3-6 in Charlotte, North Carolina.

The RNC itself, for example, will have free speech zones, which will serve as containment quarters for the protesters by not allowing them to leave the designated areas and cause trouble.

Another recent DHS move to gear up was back in March of this year, when it gave the defense contractor ATK a deal to provide the DHS with 450 million .40 caliber hollow-point ammunition over a five year period.

On top of that, the DHS has recently purchased a number of bullet-proof checkpoint booths and hired hundreds of new security guards to protect government buildings.