Attention is back on the Euro debt crisis again

Ticking off by Troika heightens fears of Greek exit from euro
International debt inspectors claim Greece is failing to keep to deficit reduction plan, while shares in Spain tumble 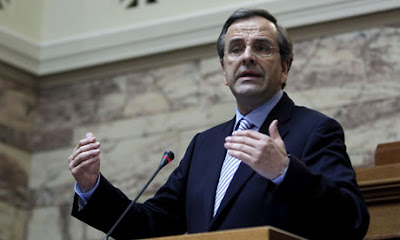 Financial market fears over a possible Greek exit from the single currency were fanned on Tuesday by a gloomy assessment of the country's economic plight from international debt inspectors and evidence of a growing rift between Athens and Berlin.

Officials from the so-called Troika – the IMF, the European Union and the European Central Bank – warned that Greece had failed to keep to the deficit reduction plan agreed earlier this year.

Arriving in Athens for talks with the coalition government, one official was quoted as saying: "Greece is hugely off track. The debt-sustainability analysis will be pretty terrible."

Another official pointed to the latest growth estimates from Athens, which show the economy contracting by 7% this year rather than the 5% previously forecast, meaning that the debt burden is only increasing in relation to GDP.

"Nothing has been done in Greece for the past three or four months," said the official, referring to the delays caused by the two elections held since May.

German politicians have been ratcheting up the pressure on the new government of Antonis Samaras in recent days, stressing that Greece can expect its financial lifeline to be cut off unless it agrees to a fresh round of deeply unpopular austerity measures.

Samaras reacted angrily to suggestions from Germany that Greece is incapable of meeting its bailout pledges and should start planning for the return of the drachma, branding the comments irresponsible.

"I say it openly and publicly, they undermine our national effort," Samaras said in a speech to party members. "We do all we can to bring the country back on its feet and they do all they can so we can fail," he said.

The deteriorating situation in Greece coincided with another turbulent day on Europe's financial markets. Spain saw the interest rate on its 10-year debt climb to a record post-peseta level of 7.65% and shares closed at their lowest level for almost a decade amid mounting speculation that the eurozone's fourth biggest economy will require a bailout of at least €300bn (£233bn).

Concerns that financial help for Spain would leave Europe with insufficient funds to support Italy meant the Rome stock market fell to levels not seen since the creation of monetary union. Shares in London and New York were under pressure.

Lord Turner, chairman of the Financial Services Authority, admitted that he was "very concerned" about the eurozone crisis, which has been escalating amid fears that Spain may need a bailout.

"The eurozone cannot hang around," he said. Turner said the new banking bailout facility needs to be able to directly recapitalise banks and cut the "fatal" tie between sovereigns and banks. "The eurozone will not be a stable system without rapid progress towards a banking union," Turner said.

Deutsche Bank was forced to issue an unscheduled trading update – before figures officially scheduled for next Tuesday – warning that its profits were lower than forecast as a result of the crisis that was affecting its cost base, which is rising because it is largely denominated in dollars and sterling.

Trouble at Spain's 17 regional governments continued to snowball as eastern Catalonia admitted it had few funding options left to it and may well have to ask for bailout money from central government.

"Catalonia has no other bank than the government of Spain," regional finance chief Andreu Mas-Colell told the BBC.

Officials insisted he was not saying Catalonia needed money immediately from the government's new €18bn liquidity fund, but Mas-Colell admitted that if the powerful region is to roll over its debt and fund its deficit, then it must raise money from somewhere.

Officials in the Catalan capital of Barcelona said they were still working with some banks and that a new issue of patriotic bonds, which have already mopped up some 10% of local savings, was still a possibility. But the Catalan government has long been calling for central government to come up with a mechanism to help cover regional debt refinancing.

Mariano Rajoy's Spanish government has now set up a liquidity fund, but has made it clear money will come with conditions.

"The budget conditions imply presenting an adjustment programme … and, if payments are not met, intervention," budget minister Cristobal Montoro has explained, referring to direct government control of the region's finances.

He welcomed the news that Catalonia had joined Valencia and Murcia in indicating it may need money from the fund. "It is good to tell the truth," he said.

Former senior government and central bank officials, meanwhile, were grilled by a parliamentary committee looking into why Spain has needed a bank bailout of up to 100bn euros.

Former Bank of Spain governor Miguel Angel Fernández Ordóñez – pushed out of his job by the government last month - placed part of the blame on finance minister Luis de Guindos, saying he made the crisis at bailed-out Bankia crisis worse by forcing the dismissal of chairman Rodrigo Rato.

Posted by seemorerocks at 09:15