Holes in the Ozone Layer 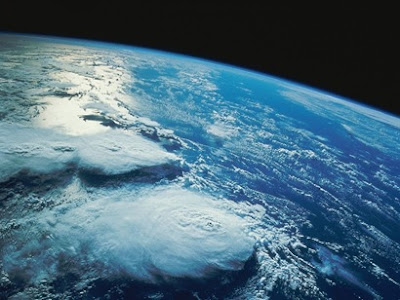 As the planet warms, some studies have suggested summer storms may become more frequent and intense. This would send more water vapor—a potentgreenhouse gas—into the stratosphere, the middle layer of Earth's atmosphere, which sits between 9 and 22 miles (14 and 35 kilometers) above Earth's surface.

In a recent series of research flights over the United States, Harvard University atmospheric chemist James Anderson and colleagues found that summer storms often loft water vapor into the stratosphere.

"It was an unequivocal observation," he said. "We had a number of flights, and this was an abiding feature" of the storms.

Under the right conditions, this water vapor could trigger chemical reactions that deplete the ozone layer, which prevents harmful ultraviolet rays from reaching Earth's surface, the study says.

Even small reductions in the ozone layer can make people more susceptible to skin cancer and eye damage, experts say.
(See "Whatever Happened to the Ozone Hole?")
Ozone-Attacking Conditions Occur in U.S.?

The finding concerned Anderson, whose research in the 1980s and '90s played a pivotal role in establishing the Montreal Protocol. The international treaty phased out the production of ozone-depleting chemicals called chlorofluorocarbons (CFCs), which were found in a variety of products, including hairsprays and refrigerators.

CFCs produce a form of chlorine that degrades ozone particles in the stratosphere, most signifcantly over the Arctic and Antarctic.

Subsequent studies in the Arctic and in the laboratory revealed that both temperature and water vapor concentrations are crucial in a chemical reaction that makes chlorine attack ozone.

"We essentially have the chemistry that's present in the Arctic that is clearly very potent for destroying ozone," Anderson said.

The findings, published today in the journal Science, calculate ozone loss at a rate between 4 and 6 percent per day in water vapor-rich areas of the stratosphere. The effect could persist for several weeks after a storm, he added.

What worries Anderson most is where and when this phenomenon appears to occur.

"It is not ozone loss in Antarctica and the Arctic under winter conditions. It is an attack on the ozone layer in the summer over populated regions of the Northern Hemisphere," he said.

Simone Tilmes, an atmospheric chemist at the National Center for Atmospheric Research in Boulder, Colorado, views the new findings with caution.

Research does indicate that more water vapor in the stratosphere will lead to greater ozone loss under the right conditions, said Tilmes, who was not involved with the current research.

But the study found no direct evidence of a simultaneous observation of water vapor and the presence of destructive chlorine, she said.

"This raises attention," she said, emphasizing that more research is needed to determine if such ozone depletion will occur.

Study leader Anderson and colleagues acknowledged that they haven't yet measured the ozone-destroying chlorine in the North American stratosphere.

However, he noted that, though chlorofluorocarbons are no longer released into the atmosphere, the compounds already there can persist for decades.

If there's a silver lining to the research, it's that the results could have a tangible impact on people's behavior, Anderson said.

Unlike with the "out of sight, out of mind" nature of melting glaciers and carbon dioxide and methane emissions, he said, "most people know that skin cancer is highly prevalent and increasing its frequency."

If the new findings are confirmed, people may see a direct link between climate change and their health.

That, he said, "might spur them to "step up and take responsibility for what is actually occurring."