Another garden falls foul of the law 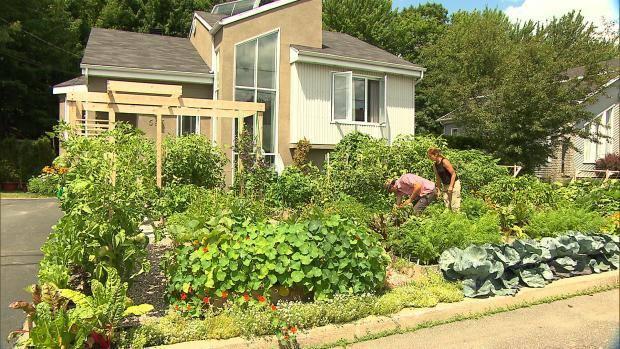 A Drummondville couple who ran afoul of authorities with their front-lawn vegetable garden have been given a reprieve – they won’t have to uproot the offending plants until the start of September.

This comes after a Sunday bed-in to “give peas a chance” caught the attention of the powers that be.

Michel Beauchamp and Josée Landry were facing fines of as much as $300 a day in bylaw violations for transforming their lawn into a garden of leafy delights this summer.

In an attempt to cultivate a healthier lifestyle, the couple decided to grow their own produce.

But the municipality says the front lawn must be 30-per-cent grass.

The story has attracted international attention, thanks to the power of social media and perhaps in part to a slow summer news cycle.

On the weekend they staged a John Lennon and Yoko Ono-like bed-in to further spotlight their plight.

The “give peas a chance” was a word play on the famous peace plea of the former Beatle when he and his wife staged a protest in bed at the Queen Elizabeth Hotel.

The threat of fines came after two warnings, the most recent received last week.

The couple were supposed to pull the law-breaking rhubarb and other greens by Tuesday.

That deadline has now been moved to Sept. 1, but the battle is not over.

Beauchamp and Landry vow to defend their right to garden on their land, but at the root of the problem is that the land is not all theirs.

“Only a certain percentage of the land belongs to them; from the sidewalk in about seven feet, that space belongs to the public municipality,” said Reynald Forcier, a spokesperson for Drummondville.

The couple lives in the former town of St. Charles de Drummond, annexed to Drummondville in 2004.
Whereas the city of Drummondville has passed a grass-only front-lawn bylaw recently, homeowners in the former St. Charles de Drummond have kept the right to plant vegetables and other greenery in their front yards, but only on 70 per cent of the space.

The remaining 30 per cent, the city portion, must be grass, says the bylaw.

Beauchamp and Landry have told the media that their plans to switch their lawn to a vegetable patch were approved verbally by a city environmental services inspector before they embarked on their ambitious project.

“The city is NOT against vegetable gardens in Drummondville, but there must be some rules,” Forcier said. “Gardens like this one can be beautiful but this (precedent) could lead to excess with others.”

Once members of the city council are back from holidays on Aug. 13, these issues will be debated in the next council meeting.

“With the new rules passed for Drummondville, there are no (vegetable) gardens allowed in front from now on, but for those with acquired rights, we will be debating how to interpret the percentage rule,” Forcier said.

“The council will take another look at this based on the documents we have received from the couple.”