David and Goliath battle against the banks

Someone somewhere is taking on the banks. I wish New Zealand had more in common with South Africa than just rugby!

In what certainly has the hallmarks of a David vs Goliath battle, SA’s four biggest banks and the Reserve Bank have been served with summons to defend themselves against allegations of unconstitutional banking practices.

The papers were served by the sheriff of the court on behalf of the plaintiff, a non-governmental and not for profit organisation, New Economic Rights Alliance (NewERA).

According to Scott Colin Cundill, director of NewERA, the action is not financially motivated. “We are not suing for money. We are asking the court to suspend all legal action between the banks and SA citizens, until a full investigation has been undertaken into our banking system.”

The banks are expected to retain the best legal minds in the country. At the moment Cundill is making use of a legal advisor but will argue the application himself.

At the heart of the issue are three trade practices (in particular) conducted by banks. NewERA intends to show that these are unconstitutional.

The first is the fractional reserve banking system. The conventional view of this system is that only a fraction of bank deposits are backed by actual cash-on-hand and are available for withdrawal. This is done deliberately in order to expand the economy by freeing up capital that can be loaned out to other parties. “Our issue with this is that new loans can be created without having the actual cash to back them,” says Cundill.

The second is the process of seigniorage. This is the profit that the SA Reserve Bank (and governments around the world) earn from the difference in the cost of printing money and the face value of that money. “The way in which these notes enter the banking system and therefore the public, and thus how seigniorage is charged, is a very little known or understood process.”

The last matter that NewERA is taking issue with is securitisation. This is the financial practice of pooling various types of contractual debt such as residential home or car loans, repackaging it and selling this consolidated debt to various investors. It was the practice of selling toxic debt, packaged as collateralised mortgage obligations, which triggered the financial crisis in 2008.

NewERA will also argue that the lack of transparency regarding how banks make use of depositors’ money, prevents individuals from making informed decisions when dealing with agreements that affect their financial well-being.

“What we want is the development of co-operative, sound economic principles to ensure that risk and, or fault does not devolve onto the consumer unnecessarily and unconditionally, causing loss of property, investments and value,” says Cundill.

NewERA has 154 members who are joined in the application.

The application is also supported by more than 115 000 people, Cundill says.

The banks have ten days in which to file their intention to defend. 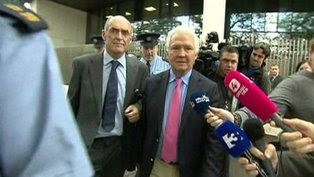 Mr FitzPatrick was charged with 16 offences under Section 60 of the Companies Act.

He is accused of permitting Anglo Irish Bank to give financial assistance to Patricia Quinn, her five children and ten senior clients of the bank, who became known as the 'Maple Ten', to enable them to buy shares in the bank.

He was granted bail to appear in court again on 8 October for service of the book of evidence.

Six men were facing jail terms yesterday after being found guilty by a jury of insider dealing in a ring where employees in the print rooms at UBS and JP Morgan passed on secret takeover deal documents to their trader friends.

Brothers Ersin and Ali Mustafa passed on confidential and price-sensitive information from their printing work, downloading confidential information onto memory sticks for friends who used the information to make spread bets on share prices of the companies involved.

The men made their bets knowing the share prices would rise when the stolen information was made public.

The four-and-a half-month trialwas the longest and most complex prosecution brought by the Financial Services Authority (FSA), involving evidence from hundreds of trading accounts and telephone records.

The men were convicted of making a profit of £732,044 over a two-year period from May 2006. The FSA had prepared further charges but the judge ruled they should not be heard for trial-management reasons – effectively to save the public money on an even longer hearing.

Posted by seemorerocks at 09:46