It is high time that the strangehold around Gaza was broken 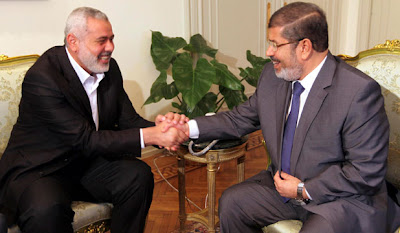 A Palestinian official said the head of Egyptian intelligence had promised measures to increase the flow of fuel supplied by Qatar to Gaza via Egypt and needed to ease the small Palestinian territory's power shortages.

But there was no immediate sign that Cairo was ready to open up its border with Gaza to the extent sought by Hamas, something analysts partly attributed to the influence still wielded by the Hosni Mubarak-era security establishment.

"Mursi's heart is with Hamas but his mind is elsewhere," said Hany al-Masri, a Palestinian political commentator.

"He will give them as much as he can but he won't be able to give them much because his powers are restricted," he said.

Mursi's victory was celebrated in Gaza as a turning point for a territory whose economy has been choked by a blockade imposed by Israel and in which Egypt took part by stopping everything but a trickle of people from crossing the border.

But as head of state, Mursi must balance support for Gaza with the need to respect international commitments, including Egypt's peace treaty with Israel.

"He will be very cautious," said Mustapha Kamel Al-Sayyid, an Egyptian analyst.

"The intelligence and the military will have their say on this."

After Haniyeh's meeting with Mursi, the Hamas delegation left the presidential palace in Cairo without comment.

Mursi's spokesman said the meeting had touched on subjects including "lifting the siege and the suffering of the people in Gaza" and reconciliation with the Ramallah-based Palestinian Authority, led by Mahmoud Abbas.

Sworn in on June 30, Mursi is trying to stamp his authority on an Egyptian state still influenced to a large degree by a council of military generals led by Field Marshal Hussein Tantawi, Mubarak's defence minister for two decades.

Mubarak had regarded Gaza's Islamist rulers with suspicion bordering on outright hostility reflecting his enmity towards the Brotherhood, the ideological parent of Hamas that was outlawed for decades in Egypt until last year's uprising.

Mubarak never recognised the Hamas administration which has governed Gaza since 2007, when its forces defeated Abbas' Palestinian Authority. Earlier this month, Mursi received both Abbas and Khaled Meshaal, the Hamas leader in exile.

On Thursday, Haniyeh and Mursi shared a Ramadan iftar - the meal with which Muslims break their fast during the holy Islamic fasting month. Earlier, Haniyeh had met chief of intelligence Murad Muwafi, reflecting the role still played by the Egyptian security establishment in managing Palestinian affairs.

The Egyptians said the quantity of fuel supplied via Egypt to Gaza would be more than doubled next week, a Palestinian official familiar with the talks told Reuters.

The fuel supplied by Qatar goes from Egypt into Israel, from where it passes through a crossing into Gaza in accordance with the existing arrangements on how goods pass into the territory that was captured by Israel from Egypt in a 1967 war.

Israel withdrew settlers and soldiers from Gaza in 2005.

Earlier this year, Brotherhood officials had lobbied for the fuel to be sent straight across Egypt's border with Gaza - a move sought by Hamas and which would have marked a major step towards opening the border to trade and commerce.

In another apparent gesture triggered by Mursi's election victory, Egypt is to ease restrictions on Palestinians travelling through Egyptian territory on their way in and out of Gaza, Egyptian border officials said this week.

Palestinians on that route have complained of mistreatment including detention at their port of arrival ahead of their deportation to the Rafah crossing.

A diplomat familiar with Cairo's policies on Gaza did not expect Mursi to open Rafah to trade. But all else could be discussed, he said, including "improving conditions at crossings and increasing the number of passengers and Egyptian aid".