Healthcare in 'the land of the free'

Uninsured Colorado shooting victim faces $2 mln medical bill
Lying in the hospital in an induced coma after a gunshot through his eye, 23-year old Aurora shooting victim Caleb Medley has no idea that he’s facing $2 million in medical costs. 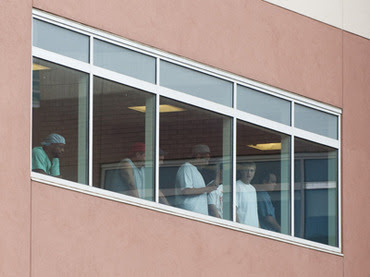 Medley lost his right eye, is suffering brain damage and has been put in a medically induced coma.

“Evil came to them through a man that opened fire in that theater,”friends and family wrote on a website to raise money for Medley’s hospital expenses.“Caleb was struck in the face by the gun fire.”

While he is being treated in the intensive care unit, his wife gave birth to a baby boy just one floor away. But the soon-to-be father may wake up to a life of debt and expenses that could forever ruin his young family’s finances.
“Caleb and his family will be struggling with these hospital bills for the rest of their lives,”said Michael West, a friend of the victim.

The young man, relying on a ventilator to breathe, has no health insurance – but that is not an issue for some of the other victims. Some of the hospitals treating the Batman shooting victims have said they will limit or completely cover their patients’ medical bills.

But unfortunately for Medley, the hospital that is treating him has not made any promises. The University of Colorado Hospital, where Medley is being treated, is among the state’s top two safety net hospitals and, combined with the Denver Health Medical Center, provided $740 million in free care in 2011. Still, it would not say whether it would provide Medley any assistance, forcing friends and family of the seriously injured victim to find ways to raise money.

“Many of these people I assume will need prolonged and expensive rehabilitation after their immediate injuries are dealt with, and that seems precisely what hospitals today are less and less willing to cover out of their own funds, and no law requires that they do so, as far as I’m aware,”said Dr. Howard Brody, director of the Institute for Medical Humanities at the University of Texas Medical Branch.

Being unsure whether or not Medley’s hospital would pay any of his expenses, the shooting victim’s friends and family have set a goal of raising $500,000 to cover his hospital bills.

“All the money that is donated is going straight to Caleb, Katie and Hugo to help them with medical bills, getting back on their feet, help them with baby items,”West said.

But even if that fundraising goal is reached, it would not cover a bill as high as $2 million, potentially leaving the new family in an unfortunate financial situation.
And while Medley’s hospital expenses may be higher than most, he is among 1.5 million Coloradoans – one third of the state – that have inadequate or no health insurance, according to a 2011 report by The Colorado Trust. The highest uninsured rate is among adults between 18 and 34, and many of the injured shooting victims fall into that group.

But while Warner Bros. and Americans across the nation are donating vast amounts of money to help cover medical costs for the shooting victims, some of the hospitals themselves cannot even promise to provide any sort of assistance.
Instead of relieving the financial stress glaring at Medley’s family and the 22 other shooting victims it is treating, the University of Colorado Hospital, on its website, is asking others for donations.

With no right eye and a long recovery period ahead of him, Medley will soon meet his newborn son, his financial fate lying solely in the hands of the hospital that was required by law to treat him.