This will really enhance his enjoyment of the Olympics!
George Osborne reeling as economy enters the disaster zone
Chancellor urged to rethink austerity plan by business, the City and opposition after shock slump in GDP

George Osbourne was coming under intense pressure from business, the City and the opposition on Wednesday to rethink his hardline austerity approach after news of a deepening double-dip recession dealt a severe blow to the government's deficit reduction strategy.

The Bank of England is expected to embark on further emergency measures to stimulate growth this autumn following the release of official figures showing a shock 0.7% contraction in economic activity in the three months to June.

Although the decline was almost certainly exaggerated by the extra bank holiday for the Queen's diamond jubilee, the City was left stunned by the data from the Office for National Statistics.

Evidence that the economy is now smaller than when the coalition came to power in May 2010 prompted immediate calls for a change of course.

The Liberal Democrat peer Lord Oakeshott called Osborne a "work experience" chancellor, and urged that he be replaced at the Treasury by the business secretary, Vince Cable.

The shadow chancellor, Ed Balls, said: "These shocking figures speak for themselves. As we warned two years ago, David Cameron and George Osborne's ill-judged plan has turned Britain's recovery into a flatlining economy and now a deep and deepening recession."

Sterling fell sharply on the foreign exchanges as dealers took fright at the possibility that the credit rating agencies might strip Britain of its prized AAA status, after as a result of a growth performance that has seen activity declined in five of the past seven quarters and made Britain the worst performing country in the G8 group of industrialised countries, apart from Italy.

After a slower recovery than following the Great Depression of the 1930s, UK output is 4.5% lower than it was when the economy peaked in early 2008.

The British Chambers of Commerce and the Institute of Directors both called on the government to show "leadership", urging Osborne to take advantage of low interest rates to borrow for public investment.

The chancellor said the GDP figures were "disappointing", but that 800,000 private sector jobs had been created while the government had been reducing its inherited budget deficit by 25%.

Osborne, who has been unsettled by criticism that he is a part-time chancellor because of his other role as the Tories' main political strategist, told ITV news: "I only have one job … chancellor of the exchequer."

The prime minister will blame Britain's poor growth on the crisis in the eurozone. "The challenge is particularly great in our neighbourhood," the prime minister will tell a global investment conference at Lancaster House in London. "Since the financial crash the world economy has grown by 20%. But Europe's has hardly grown at all." He will signal that the prolonged double-dip recession is likely to lead to tough decisions in the spending review expected in 2014.

Although business groups and the City had been expecting a small decline in output in the three months to June, they were taken aback by news that the three main sectors of the economy – services, industrial production and construction – had all suffered falls in activity. The quarterly fall was more than three times as large as the City had been predicting and left the economy 0.8% smaller than a year earlier.

The TUC general secretary, Brendan Barber, said: "The UK is on course for a longer depression than the '30s, the tightest squeeze in living standards since the '20s and more than a million young people are currently out of work. The government must abandon self-defeating austerity and prioritise public and private investment in infrastructure and in the futures of our long-term unemployed to get Britain working again."

The UK is expected to emerge from its first double-dip recession since the 1970s in the third quarter, when a combination of the London Olympics and a bounce back from the production losses after the extra June bank holiday will provide a boost to activity.

The Bank of England announced this month that it was expanding its quantitative easing programme by £50bn to £375bn in an attempt to boost the amount of credit available to households and businesses. Some City analysts believe the total could eventually reach £500bn and that Threadneedle Street may contemplate cutting the bank rate – already at a historic low of 0.5% – to 0.25% in an attempt to boost growth.

John Longworth, the director general of the British Chambers of Commerce, said: "While many firms are faring better than official statistics may suggest, it's time for the government to be bold and show leadership.

Ministers can't expect firms to bust a gut to grow if they fail to take a long-term approach to creating an enterprise-friendly environment. "Deficit-reduction is vital, and businesses aren't expecting handouts. But we need a government that will pull the levers only it can reach to help companies export, invest, create new jobs and grow. That means infrastructure investment, the creation of a state-backed business bank to lend to new and growing companies, and meaningful deregulation."

Trevor Greetham, director of asset allocation at Fidelity Worldwide Investment, said: "Borrowing your way out of recession isn't as mad as it sounds. With 10-year gilt yields at a record low 1.5%, the markets are sending a clear signal that there is substantially more headroom for counter-cyclical fiscal stimulus. If the economy responds, an increase in tax revenues should more than repay the additional cost and a rise in wages will help the consumer to grow into their debt."


The global recession picked up steam today with news of a UK GDP Shock.

The economy shrank by 0.7pc in the second quarter – far more than the 0.2pc fall expected, as record rainfall and the Jubilee holiday added to pressure from austerity cuts and the eurozone debt crisis.

It marks the third successive quarter of contraction, leaving Britain in its longest double-dip recession in more than 50 years.

The Office for National Statistics showed broad-based weakness across the private sector, with construction output down 5.2pc, industrial production down 1.3pc and services output – which accounts for 77pc of the economy – falling 0.1pc. Only public-sector services output, and business services registered any growth.

Victoria Clarke, economist at Investec, said the economy would now have to grow by 1.2pc in both the third and fourth quarters for the economy to expand by just 0.1pc in 2012 overall.

A drop of .7% might not seem that shocking in the US, but that's because the US uses annualized reporting while most of the rest of the world does not.

I asked Doug Short at Advisor Perspectives to show UK GDP as it would be presented in the US. 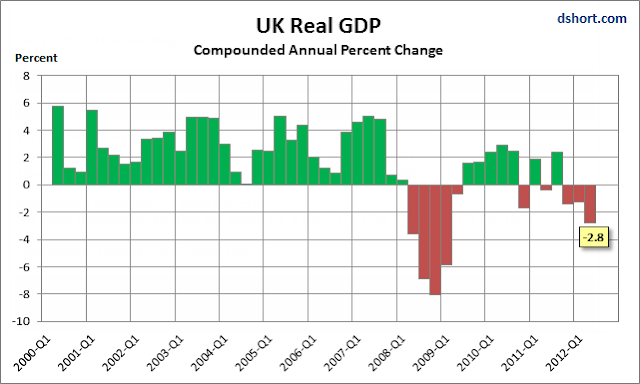 Presented that way, UK GDP does look like a disaster. Of course the results were a disaster regardless of how presented, but the US peculiar method of reporting may not be obvious to US readers following European news.