Living in lala-land : 'Progress in reducing the jobless rate probably will be “frustratingly slow.” '
Growth In U.S. Slows As Consumers Restrain Spending
The world’s largest economy cooled in the second quarter as limited job growth prompted Americans to curb spending while state and local governments cut back. 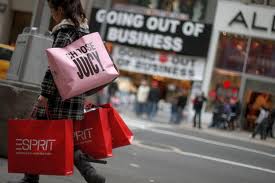 Gross domestic product, the value of all goods and services produced, rose at a 1.5 percent annual rate after a revised 2 percent gain in the prior quarter, Commerce Department data showed today in Washington. Household purchases, which account for about 70 percent of GDP, grew at the slowest pace in a year.

Europe’s debt crisis and looming U.S. tax changes threaten to keep the expansion in check and are hurting sales at companies from United Parcel Service Inc. (UPS) to Procter & Gamble Co. (PG) Federal Reserve policy makers, led by Chairman Ben S. Bernanke, meet next week to discuss whether further measures are needed to boost growth and push down an unemployment rate that’s been stuck above 8 percent for more than three years.

“We’re not going to bust out of this moderate-growth recovery we’ve been in for quite some time,” said Dean Maki, chief U.S. economist at Barclays Capital in New York, who correctly forecast the GDP gain. “Growth is slow but not fragile, and there may be a modest pickup in the second half.”

Stocks rose on speculation the European Central Bank will buy bonds to help lower borrowing costs and preserve the euro. The Standard & Poor’s 500 Index climbed 1.9 percent to 1,385.97 at the close in New York. The yield on the benchmark 10-year Treasury note increased to 1.54 percent from 1.44 percent late yesterday.

“The economy remains on a moderate expansion path,” said Chris Rupkey, chief financial economist at the Bank of Tokyo- Mitsubishi UFJ Ltd. in New York, predicting growth will benefit from a decline in gasoline prices and signs the European crisis may ease.

The GDP report leaves the door open for President Barack Obama to win an election contest dominated by economic concerns and shaping up as one of the closest in decades.

“This sort of slow-growth region puts it in the too-close- to-call category,” said Alan Abramowitz, a political science professor at Emory University in Atlanta.
The median forecast of 82 economists surveyed by Bloomberg News called for a 1.4 percent increase in GDP in the second quarter. Estimates ranged from gains of 0.7 percent to 1.9 percent.

Household consumption rose at a 1.5 percent rate from April through June, down from a 2.4 percent gain in the prior quarter. Purchases added 1.05 percentage points to growth.

Rebecca Offensend, who works in the marketing department of a travel company in San Francisco, said she and her friends are cutting back.

“There’s a belt-tightening going on with my group of friends,” Offensend, 26, said. “It’s just very, very hard to save any money at all when you’re living paycheck to paycheck. It shocks me that I’m barely getting by after taxes.”

UPS, the world’s largest package-delivery company, cut its full-year profit forecast after a drop in second-quarter international package sales. The Atlanta-based company, considered an economic bellwether because it moves goods ranging from financial documents to pharmaceuticals, projects the U.S. will grow 1 percent in the remainder of 2012.

“Economies around the world are showing signs of weakening,” Chief Executive Officer Scott Davis said on a July 24 call with analysts. “In the U.S., uncertainty stemming from this year’s elections and the looming fiscal cliff constrains the ability of businesses to make important decisions such as hiring new employees, making capital investments, and restocking inventories.”

The so-called fiscal cliff represents more than $600 billion in higher taxes and reductions in defense and other government programs next year that will occur automatically without action by U.S. lawmakers, threatening to push the economy into recession.

A pickup in homebuilding has helped some manufacturers. Caterpillar Inc. (CAT), the largest maker of construction and mining equipment, this week raised its full-year profit forecast on increased demand from North American builders.

“We are planning for a world that is growing anemically in the next 24 months,” Chief Executive Officer Doug Oberhelman said on a July 25 conference call to discuss his company’s earnings. “We are not planning for an implosion.”

With today’s release, the Commerce Department’s Bureau of Economic Analysis also issued revisions dating back to the first quarter of 2009. The changes showed the first year of the recovery from the worst recession in the post-World War II era was even weaker than previously estimated.

In the first three years of this recovery, the economy has grown 6.7 percent compared with an average 14 percent gain during comparable periods in expansions dating back to 1948, excluding the short-lived 1980-81 rebound.
GDP grew 2.5 percent in the 12 months after the contraction ended in June 2009, compared with the 3.3 percent gain previously reported, the Commerce Department said.

The final quarter of last year was revised up to a 4.1 percent gain, the best performance in almost six years, underscoring a more marked slowdown in the first half of 2012. The fourth-quarter gain was previously reported as 3 percent.

Another report today showed consumer confidence in July dropped to the lowest level this year. The Thomson Reuters/University of Michigan final index of sentiment declined to 72.3 this month from 73.2 in June. The gauge was projected to hold at the preliminary reading of 72, according to the median forecast of economists surveyed by Bloomberg.

Recent data signal consumers are reluctant to step up purchases. Retail sales fell in June for a third consecutive month, the longest period of declines since 2008. Same-store sales rose less than analysts’ estimates at retailers including Target Corp. (TGT) and Macy’s Inc. (M)

Consumers may remain cautious until hiring accelerates. Payroll gains averaged 75,000 in the second quarter, down from 226,000 in the prior three months and the weakest in almost two years. The unemployment rate, which held at 8.2 percent in June, has exceeded 8 percent for 41 straight months.

“Economic activity appears to have decelerated somewhat during the first half of this year,” Bernanke said in testimony to Congress. The Fed is “prepared to take further action as appropriate to promote a stronger economic recovery.”

Cutbacks by government agencies continued to hinder growth as spending dropped at a 1.4 percent annual rate in the first quarter, the ninth decrease in the last 10 periods. The decline was led by a 2.1 percent fall at the state and local level that marked an 11th consecutive drop.

Business investment cooled last quarter, reflecting stagnant spending on commercial construction projects. Corporate spending on equipment and software improved, climbing at a 7.2 percent pace, up from a 5.4 percent increase in the previous quarter.

A report yesterday showed the corporate spending outlook has dimmed. Bookings for non-military capital goods excluding aircraft, a proxy for future investment, fell at a 3.1 percent annual rate in the second quarter, the first decrease since the same period in 2009, when the U.S. was still in a recession, according to Commerce Department data.

A measure of inflation, which is tied to consumer spending, climbed at a 0.7 percent annual pace in the second quarter, the smallest gain in two years. The slowdown in spending combined with less inflation helped boost the personal saving rate to 4 percent from 3.6 percent in the prior period.