US 'extreme drought' zones triple in size
The drought in America's breadbasket is intensifying at an unprecedented rate, experts warned, driving concern food prices could soar if crops in the world's key producer are decimated.

The US Drought Monitor reported a nearly threefold increase in areas of extreme drought over the past week in the nine Midwestern states where three quarters of the country's corn and soybean crops are produced.

"That expansion of D3 or extreme conditions intensified quite rapidly and we went from 11.9 percent to 28.9 percent in just one week," Brian Fuchs, a climatologist and Drought Monitor author, told AFP.

"For myself, studying drought, that's rapid. We've seen a lot of things developing with this drought that were unprecedented, especially the speed."

"If you are following the grain prices here in the US, they are reflecting the anticipated shortages with a price increase," Fuchs said.

"In turn, you're going to see those price increases trickle into the other areas that use those grain crops: cattle feed, ethanol production and then food stuffs."

In some rural areas, municipal water suppliers are talking about mandatory restrictions because they have seen such a dramatic drop in the water table that they fear being unable to fulfill deliveries to customers, Fuchs said.

"Things have really developed over the last two months and conditions have worsened just that quick and that is really unprecedented," he added.

"Definitely exports are going to suffer because there is going to be less available and the markets are already reflecting that.

"It's anticipated that this drought is going to persist through the next couple of months at least and conditions are not overly favorable to see any widespread improvement."

President Barack Obama's administration has opened up protected US land to help farmers and ranchers hit by the drought and encouraged crop insurance companies to forgo charging interest for a month.

Officials have said the drought will drive up food prices since 78 percent of US corn and 11 percent of soybean crops have been hit and the United States is the world's biggest producer of those crops.

The current drought has been compared to a 1988 crisis that cut production by 20 percent and cost the economy tens of billions of dollars.

The drought in America's breadbasket is intensifying at an unprecedented rate, experts warned, driving concern food prices could soar if crops in the world's key producer are decimated.

The US Department of Agriculture issued retail price forecasts Wednesday for 2013 and they already showed an impact from the drought, with consumers expected to pay between three and four percent more for their groceries.

"The 2013 numbers reflect higher-than-average inflation which is partly a function of the drought and the higher crop prices," said Ephraim Leibtag of the USDA's Economic Research Service. "The drought effects are starting now at the farm and agricultural level. "Those things take two to 12 months to work through the system. So you'll see some effects as early as the fall (autumn) in terms of the grocery stores and restaurants, certainly later in the year and into 2013."

The full impact of the drought on food prices won't be known for months.

Even before the last week, farmers were telling AFP they may have to cut their losses -- chopping down fields of half-mature, earless corn to feed the stalks to cattle. Weather forecasters predicted no respite.

I haven't seen anything about Canada, so I decided to check.

Drought imperils eastern Canada crops
Weeks of drought have turned much of Ontario’s prime agricultural land into a dust bowl. And it is corn farmers, especially in the southwest and eastern parts of the province, who have been the hardest hit.

“It is a bad year in eastern Canada and it is getting worse,” said Evan Fraser, a geography professor who studies global food security at the University of Guelph, west of Toronto. The far southwest part of Ontario is “looking grim,” Dr. Fraser said, and in other parts of the province “it’s a bit of a wait-and-see game.”


Although many parts of Western Canada have experienced an excellent growing year, the east is parched. In Quebec, fruit is wilting on trees and Atlantic Canadian farmers are seeing their crops bake in the heat.

In Ontario, some parts have received less than half of the normal precipitation for this time of year. The weather over the next week or so will dictate how much of the Ontario corn crop survives and it will take several days of sustained rain to make a difference.

“We’re at the mercy of Mother Nature right now,” Dr. Fraser said. He points out that there should still be a lot of corn available because so much was planted in the United States.

Ron Miller of Miller’s Farm and Market near Manotick, south of Ottawa, said he estimates his corn harvest will be about 60 per cent of the normal yield. “It’s been mediocre,” he said. “Some of the land is better than others.”

A downpour blew through his region on Monday and Mr. Miller said he is waiting to see whether it helped. But he said he cannot remember a drought of this magnitude since 1965.

The federal New Democrats are calling on Agriculture Minister Gerry Ritz to say he is willing to leap to the rescue of farmers.

Malcolm Allen, the agriculture critic for the NDP, told a news conference on Tuesday that it is too late for many Ontario grain growers to salvage anything from this growing season.

“The crops are literally burned off the land,” Mr. Allen said. “This is a huge issue for eastern Canada and we need the minister to be on the ground and talking to farmers now about the risk they are facing with this drought.”

Mr. Ritz said his officials are monitoring the situation and working with farmers to support them during this difficult period.

But, since neither the farmers nor the Ontario government are asking for help, it is unclear what other assistance Ottawa could provide at this juncture.

Barry Senft, the CEO of the Grain Farmers of Ontario, said 80 per cent of Ontario farmers are protected with crop insurance, which will lessen the financial impact of the dry conditions. Claims for losses will not be coming in until later in the year when the extent of the damage can be fully assessed.

The Ontario government says a call now for federal assistance would be premature.

“At this point we are not asking them [the federal government] for anything specific,” said Mark Cripps, a spokesman for Ontario Agriculture Minister Ted McMeekin. “We won’t know what yield losses are until harvest time so it’s pretty hard to ask for disaster relief.”

And Ontario has an effective suite of risk-management programs to protect farmers that will cover most losses and help producers who need interim financing, Mr. Cripps said.

Ben Bradshaw, another University of Guelph professor who studies agriculture management, said research shows that one-off bailouts in extreme circumstances like droughts are not as effective at ensuring the sustainability of farms as convincing farmers to manage their own risks with crop insurance and by producing crops that are more resilient.

“Bailouts make sense in terms of popular opinion,” Dr. Bradshaw said, “but it’s no basis upon which to run agriculture policy.”

And nothing about Mexico since March. I presume that means the problem has gone away - LOL 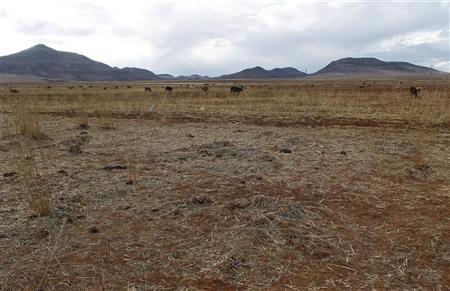 A severe drought in Mexico that has cost farmers more than a billion dollars in crop losses alone and set back the national cattle herd for years, is just a foretaste of the drier future facing Latin America's second largest economy.


As water tankers race across northern Mexico to reach far-flung towns, and crops wither in the fields, the government has allotted 34 billion pesos ($2.65 billion) in emergency aid to confront the worst drought ever recorded in the country.


The overall cost to the economy is still being gauged but Mexico's drought-stung winter has been evolving for years and is expected to worsen as the effect of global climate change takes hold, according to the government....

Posted by seemorerocks at 11:33