Why Do Progressive Liberals Fall for “Humanitarian War”?
Submitted by George Washington 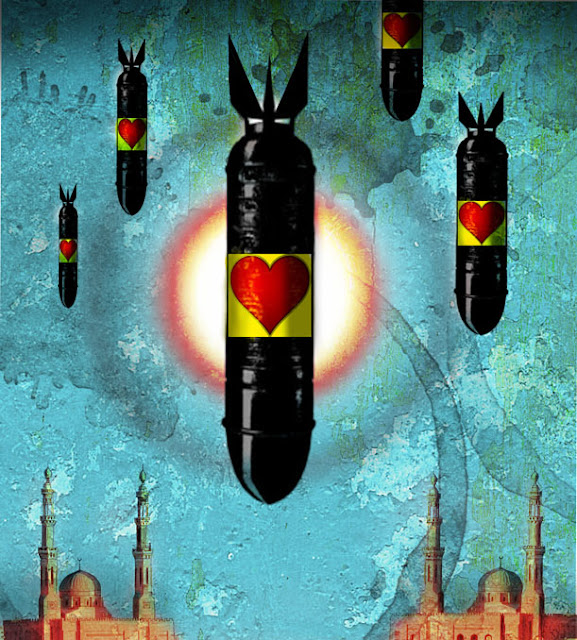 The Founding Fathers – the basis for American values – warned against standing armies and foreign entanglements, saying that overgrown military establishments destroy our liberty.

Liberal economists – such as Nobel prize winner Joe Stiglitz and James Galbraith – have demonstrated that large military budgets and war destroy our economy, and help the rich at the expense of everyone else.

Progressive University of Chicago professor Robert A. Pape – who specializes in international security affairs – points out:

Extensive research into the causes of suicide terrorism proves Islam isn’t to blame — the root of the problem is foreign military occupations.

Each month, there are more suicide terrorists trying to kill Americans and their allies in Afghanistan, Iraq, and other Muslim countries than in all the years before 2001 combined.

New research provides strong evidence that suicide terrorism such as that of 9/11 is particularly sensitive to foreign military occupation, and not Islamic fundamentalism or any ideology independent of this crucial circumstance. Although this pattern began to emerge in the 1980s and 1990s, a wealth of new data presents a powerful picture.

More than 95 percent of all suicide attacks are in response to foreign occupation, according to extensive research [co-authored by James K. Feldman - former professor of decision analysis and economics at the Air Force Institute of Technology and the School of Advanced Airpower Studies] that we conducted at the University of Chicago’s Project on Security and Terrorism, where we examined every one of the over 2,200 suicide attacks across the world from 1980 to the present day. As the United States has occupied Afghanistan and Iraq, which have a combined population of about 60 million, total suicide attacks worldwide have risen dramatically — from about 300 from 1980 to 2003, to 1,800 from 2004 to 2009. Further, over 90 percent of suicide attacks worldwide are now anti-American. The vast majority of suicide terrorists hail from the local region threatened by foreign troops, which is why 90 percent of suicide attackers in Afghanistan are Afghans.

Israelis have their own narrative about terrorism, which holds that Arab fanatics seek to destroy the Jewish state because of what it is, not what it does. But since Israel withdrew its army from Lebanon in May 2000, there has not been a single Lebanese suicide attack. Similarly, since Israel withdrew from Gaza and large parts of the West Bank, Palestinian suicide attacks are down over 90 percent.

Some have disputed the causal link between foreign occupation and suicide terrorism, pointing out that some occupations by foreign powers have not resulted in suicide bombings — for example, critics often cite post-World War II Japan and Germany. Our research provides sufficient evidence to address these criticisms by outlining the two factors that determine the likelihood of suicide terrorism being employed against an occupying force.

Rather, religious difference matters because it enables terrorist leaders to claim that the occupier is motivated by a religious agenda that can scare both secular and religious members of a local community — this is why Osama bin Laden never misses an opportunity to describe U.S. occupiers as “crusaders” motivated by a Christian agenda to convert Muslims, steal their resources, and change the local population’s way of life.

The second factor is prior rebellion. Suicide terrorism is typically a strategy of last resort, often used by weak actors when other, non-suicidal methods of resistance to occupation fail. This is why we see suicide attack campaigns so often evolve from ordinary terrorist or guerrilla campaigns, as in the cases of Israel and Palestine, the Kurdish rebellion in Turkey, or the LTTE in Sri Lanka.

One of the most important findings from our research is that empowering local groups can reduce suicide terrorism. In Iraq, the surge’s success was not the result of increased U.S. military control of Anbar province, but the empowerment of Sunni tribes, commonly called the Anbar Awakening, which enabled Iraqis to provide for their own security. On the other hand, taking power away from local groups can escalate suicide terrorism. In Afghanistan, U.S. and Western forces began to exert more control over the country’s Pashtun regions starting in early 2006, and suicide attacks dramatically escalated from this point on.

The first step is recognizing that occupations in the Muslim world don’t make Americans any safer — in fact, they are at the heart of the problem.

One of the principal causes of terrorism is injuries to people and families.

(Indeed, Al Qaeda wasn’t even in Iraq until the U.S. invaded that country.)
Liberal icon Noam Chomsky agrees that 9/11 happened because of American imperial policies in the Middle East.

Liberals – justifiably – despised Bush, Cheney, Rumsfeld and the other neoconservatives’ warmongering.
The U.S. government – and especially the neocon element – has been consistently planning regime change in Syria and Libya for 20 years, and dreamed of regime change for 50 years.
Why are progressives are falling for a continuance of this decades-old neocon effort?

Why Are We Fighting on the Same Side as Al Qaeda?

Terrorist rebels have been responsible for much of the violence inside Syria. And outside monitors have confirmed that the situation on the ground is much different than it is being portrayed in the Western media. (And according to the large German newspaper FAZ, those recently massacred in Hama were on the same side as Syrian leader Assad).

The United States is actually fighting on the same side as 3 terrorist groups in Syria.  And see this.

Reuters notes that the leader of Al Qaeda – Ayman al-Zawahri – is backing the Syrian rebels, and asking his followers to fight the Syrian government.

Some of the main Al Qaeda fighters who overthrew Gadaffi – and now appear to be in control of Libya – are already helping the Syrian rebels.
Even Pat Buchanan asks:

If its good for Al Qaeda, can it be good for us?

The U.S. is arming the Syrian opposition, even though Secretary of State Clinton admits that will help Al Qaeda.

American government officials and corporate media are applauding Al Qaeda attacks in Syria. See this, this and this. Rather than condemning suicide terrorist attacks, they simply say Al Qaeda’s bombings show that the “window is closing” for Assad, and he should give up power.

We supported Bin Laden and the other originators of “Al Qaeda” in the 1970s to fight the Soviets.  Are we going to create another 9/11 by backing Al Qaeda in Syria? 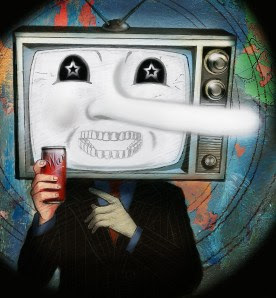 In April 1917, when Democratic President Woodrow Wilson led America into the war that he promised would “make the world safe for democracy,” he called on some of America’s foremost progressive journalists to “sell” the war to a reluctant American population through the greatest propaganda campaign ever put together. Wilson’s anxiety over securing liberal support for the war effort brought him to recognize how well known “Progressive publicists” exercised credibility in the public mind through their previous work in exposing government and corporate corruption. One such journalist was George Creel, who Wilson tapped to lead the newly formed Committee on Public Information (CPI). New Republic editor Walter Lippmann and “father of public relations” Edward Bernays were also brought on board the elaborate domestic and international campaign to “advertise America.”

Because of Creel’s wide-ranging connections to Progressive writers throughout the US, Wilson was confident that Creel would be successful in getting such intellectual workers on board the war effort, “to establish a visible link between liberal ideals and pursuit of the war,” Stuart Ewen observes. “On the whole, Wilson’s assumption was justified. When the war was declared, an impassioned generation of Progressive publicists fell into line, surrounding the war effort with a veil of much-needed liberal-democratic rhetoric.”

Well known for his derisive critiques of big business interests, such as the Rockefellers and their infamous role in the Ludlow massacre, Creel was the perfect candidate to lead a propaganda apparatus at a time when suspicion toward “a ‘capitalists’ war’” was prevalent. “When the moment to lead the public mind into war arrived, the disorder threatened by antiwar sentiments—particularly among the lower classes—was seen as an occasion that demanded what Lippmann would call the ‘manufacture of consent.’”

The sales effort was unparalleled in its scale and sophistication. The CPI was not only able to officially censor news and information, but to manufacture it. Acting in the role of an advanced and multifaceted advertising agency, Creel’s operation “examined the different ways that information flowed to the population and flooded these channels with pro-war material.”

The Committee’s domestic organ was comprised of 19 subdivisions, each devoted to a specific type of propaganda, one of which was a Division of News that distributed over 6,000 press releases and acted as the chief avenue for war-related information. On an average week, more than 20,000 newspaper columns carried data provided through CPI propaganda. The Division of Syndicated Features enlisted the help of popular novelists, short story writers, and essayists. These mainstream American authors presented the official line in a readily accessible form  reaching twelve million people every month. Similar endeavors existed for cinema, impromptu soapbox oratory (Four Minute Men), and outright advertising.

“It is a matter of pride to the Committee on Public Information, as it should be to America, that the directors of English, French, and Italian propaganda were a unit in agreeing that our literature was remarkable above all others for its brilliant and concentrated effectiveness.”

Alongside Creel’s recollections, out of their experiences in the CPI the liberal-minded Lippmann and Bernays wrote of their overall contempt for what they understood as a malleable and hopelessly ill-informed public that could not be trusted with serious decision-making. In their view, public opinion had to be created by an “organized intelligence” of technocrats (Lippmann) or “engineered” by “an invisible government” (Bernays), with the average citizen relegated to the role of idle spectator.

Anyone who doubts that the government continues to hire numerous well-known liberal reporters to act as propagandists to sell war should read this, this and the rest of Tracy's post. 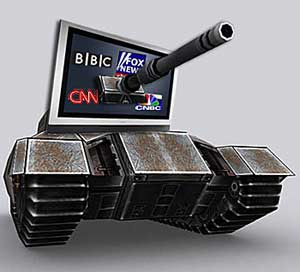 Note:  We are not endorsing the official 9/11 commission finding.