Former rating agency worker: 'I am genuinely frightened'
Joris's interviewee worries that no fundamental changes have been made since the financial crisis hit 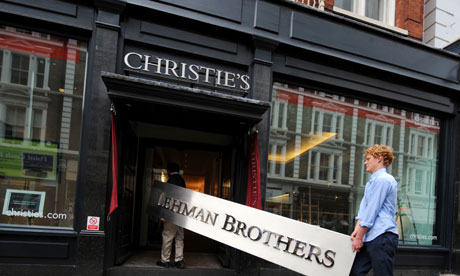 We are meeting in the heart of the City after the banking blog called on rating agency employees to talk about their experiences. The man I am meeting is British, in his early 40s, a fast talker and very friendly, the sort of person to apologise profusely when arriving four minutes late. He orders an orange juice.

"Every time I read about a new financial product, I think: 'Uh-oh.' Every new product is described in those same warm, fuzzy phrases: how great they are and how safe. Well, that's how credit default swaps and asset-backed securities were explained when banks were introducing these.

"I still get so angry when I think about it. Taking a job at a rating agency seemed a perfect match: drawing a good salary while providing a service of genuine value for society. We need ratings to work out how safe a company or an investment bond is, what the risk of default might be. If you can't trust it, you shouldn't do business with it – it's that simple.

"The reality was very different. What's making me even angrier is that we don't seem to have learned from the crisis. It's back to business as usual. I am no longer with a rating agency, and when I ask former colleagues what lessons they've taken away from the 2008 debacle, they give me a blank stare and say: 'That wasn't us, that was Moody's and Standard & Poor's.' But we just lucked out: our methods were similar.

"Moody's and S&P are the two major credit rating agencies in the world. Between them, they control 80% of the market and they are large, rich and powerful. Then there's Fitch, desperately trying to get the training wheels off and grow. Finally, there are specialised smaller agencies, one of which I was working for.

I was there when the great collapse of 2008 happened, giving me a ringside view. My agency was incredibly lucky never to have expanded into areas we didn't understand. Our head office was very conservative. This saved us.

"I was on holiday in the runup to the collapse of Lehman Brothers, when the crisis exploded. I remember opening up the paper every day and going: 'Oh my god.' It was terrifying, absolutely terrifying. We came so close to a global meltdown. There I was on my BlackBerry following events. Confusion, embarrassment, incredulity … I went through the whole gamut of human emotions. At some point my wife threatened to throw my BlackBerry in the lake if I didn't stop reading on my phone. I couldn't stop.

Now here we are four years later, and the most incredible thing has happened – we've learned nothing from the whole thing. Everybody pretends it's all OK. Sometimes I feel finance has reacted to the crisis the way a motorist might respond to a near-accident. There is the adrenaline surge directly after the lucky escape, followed by the huge shock when you realise what could have happened. But then, as the journey continues and the scene recedes in the rearview mirror, you tell yourself: maybe it wasn't that bad. The memory of your panic fades, and you even begin to misremember what happened. Was it really that bad?

"If you had told people at the height of the crisis that four years later we'd have had no fundamental changes, nobody would have believed you. Such was the panic and fear. But there we are. We went from 'We nearly died from this' to 'We survived this'.

"Have you read Gillian Tett's Fool's Gold about the crisis? It was exactly like that. You had bankers who did not understand their own complex financial products but thought that they did, and then raters who took their word for it. And nothing has fundamentally changed.

"As most people understand by now, lots of sub-prime mortgages were bundled by banks into financial products and sold on to investors. These believed they bought a very safe thing because the products had been rated triple A, which meant that there was only a 1% or so chance of a default.

"When the crisis hit, it hit hard, reality kicked in and the rating agencies suddenly downgraded triple A products to junk status in a matter of days. I won't call it fraud; I will call it a 'desperate revision of history'.

"Overall, it was more incompetence than outright fraud. If the sub-prime mess had been a huge conspiracy, it would have been very, very difficult to keep that a secret all these years. Too many people were involved. As far as the rating agencies were concerned, it was incompetence brought on by short-termist, bottom-line thinking by senior management who just wanted to make money. That meant rating as much as possible, as often as possible.

"The big change in rating agencies started around 10 years ago. Before that time Moody's was seen as boring, quiet, nerdish. Analysts there were seen as researchers, studious types. Then new management came in and they threw this out of the window. They pushed a culture that was driven by a desire to just keep rating. And they hired people that reflected their thinking.

"Imagine you are a rating agency and you see this new product coming in. You realise: if we rate it, we can keep on rating products like it, as this is the beginning of a continuing stream. And a huge stream it was: thousands and thousands of products offered for rating – and each for a fee.

"But, at the same time, rating agencies senior management have become so focused on the bottom line. There's constant cost-cutting. Demanding more from fewer and fewer people. Obviously, the quality of a rating declines when there's less time to study a company and its business plan. In my time at the company, there'd be no paid overtime, no time off after you worked through the weekend, let alone a word of thanks.

"Ultimately the work suffers, more so when there are endless internal restructurings. Two heads of department in my agency had their department organised out of existence overnight. A little while later, one was resurrected when top management realised what it had done. Higher management often doesn't properly understand what's going on in its own organisation. They are constantly redrawing the map, to the point where it feels like the map has become more important than the journey.

"But you shouldn't just rely on the information given to you by the people whose product or company you are rating. Imagine a doctor who bases his diagnosis only on what patients themselves are telling him. If they are lying to him, the doctor is lost. If they are lying to themselves, ditto. Or imagine you went to rate the UK and all you do is ask George Osborne how things are with the country.

"With every new financial product, raters should be asking: have the products been tested properly? Are they modelled for all possible conditions, so boom as well as bust times? Do we even know what it does in every phase of the economic cycle? Do we know how the product is likely to evolve over time, how will it behave when it develops into a bubble? The thing is, you cannot ask these questions if you are permanently understaffed and under-experienced.

"Young analysts are much cheaper than experienced ones. And giving people a thorough training again costs money and takes a long time. If you're young, you will assume that what you've seen until now in your life is 'normal', when it might not be. More than that, young people lack not only experience in business but also in life*. When interviewing management, you need to be able to read people, to have developed alarm bells for when they might be lying to you – or worse, lying to themselves.

"This problem exists on both sides of the divide. Many of the most dangerous financial products are designed by the same kind of fresh-faced, straight-out-of-university boys and girls. They have never seen a market panic. They are too young to know the true face of the market; they don't see how products can be misused. What they do see, and tell their bosses, is how their product can make money.

"Finance is continuously evolving, so you have highly niche financial areas that fewer and fewer understand. This all but guarantees misunderstandings. Rating agencies have mostly generalists and very few niche specialists. Often you get someone specialised in product A to rate product B, even though they are 20% different. This is where misunderstandings are quite likely to arise, when a specialist mistakenly believes that his expertise is applicable to adjacent niches.

"I am genuinely frightened. What are the ratings agencies missing at the moment? What are the companies that they're rating developing? What's the next miracle financial product and how badly is it being misunderstood?

This page guides you to my own recommendations and to the top five best-read, most-liked and most-commented of the 70-plus interviews in this series so far.

"Young people lack not only experience in business but also in life." This senior banker has thought long and hard about the new generation in banks: "Diversity has increased, with far more women and ethnic minorities. On the other hand it's become a terribly homogenous bunch of people."

"So how can rating agencies be blamed for not understanding them either?" This banker saw a complex financial product blow up in his face, potentially sinking his bank: "I would be on the phone for hours, explaining to people of increasing seniority what we were doing. I realised: they don't understand, not on a fundamental level."