Flood risk rampant across Asia's factory zones
Global insurance companies are struggling to get a grip on their flood exposure in Asia nearly a year after one of the world's costliest disasters hit Thailand, with executives fearing an even worse event looms in the region 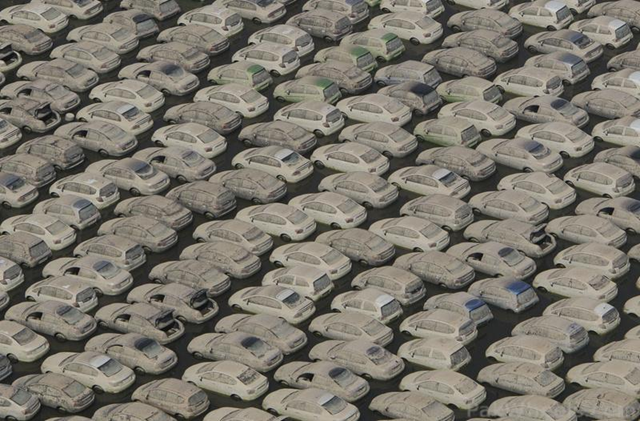 Some firms learnt from the Thai floods, with new defenses built to protect multi-billion dollar industrial estates in the country. Insurance premiums have also gone up, but factory construction in flood-prone areas remains rampant across Asia.

Insurance executives say the industry is vulnerable to another major flood, with scientists identifying the coastal plains of southern China as one area at greatest risk.

"When I go and look at these industrial parks and ports in some of the low-lying coastal areas, I just have to stand back and think: Who's insuring these things? Who's done the risk assessment?" said Adam Switzer, a coastal scientist at the Earth Observatory in Singapore.

"What I consistently see on the coasts throughout Asia is that we're still making the same sorts of mistakes."

In the rush for development that has lifted millions out of poverty in Asia, many factories have been built along coasts, especially in river deltas. According to insurance industry executives, most construction was done without long-term historical data on floods and storms.

On top of that, rising sea levels, increasing rainfall and more intense storms - together with more people and infrastructure - mean the risks have multiplied.

The goal, insurance executives say, is to break the cycle of paying for the same losses over and over again.

After the Thai floods, global reinsurer Swiss Re reassessed flood risk in emerging markets. The report's No. 1 risk was China, whose vast industrial estates are at the heart of global manufacturing, making everything from iPads to brake pads.

Among other Asian countries listed, Malaysia was 5, Indonesia 7 and India 10. Thailand was ninth.

"A new risk awareness has to set in along the entire value chain," said Tobias Farny, Munich Re's Asia-Pacific chief executive. "The exposures present need to be defined, described and ring-fenced in order to become insurable."

At an industrial estate on the flat plains north of Bangkok, where Japan's Toshiba makes lighting and home appliances, workers rush to finish a 9.5-km (6-mile) concrete and earth dike that is 1.5 meters (5 ft) higher than the old one.

Behind them, a brown stain runs along the factory buildings where floodwaters lingered for two months, knocking out major foreign-owned manufacturing operations and triggering a flurry of business interruption claims around the world.

Many in the insurance sector agree that an even bigger loss is likely in China, the motor of global manufacturing, where large areas of factory estates are vulnerable to flooding and storms.

"If we have a really extreme event in China, I am quite certain there would be some surprises for the insurance industry," said Jens Mehlhorn, head of Swiss Re's flood group. "The flooding we see currently in China is just average flooding. We haven't seen a 50- or 100-year flood event in the past 5 to 10 years."

The Pearl River Delta is one of China's biggest industrial zones. The western side of the delta, constructed on sediment-filled fish ponds and rice paddies, is flat for up to 100 km (60 miles) inland, and 40 percent is less than 2 meters (6.5 ft) above sea level.

The government has not published detailed maps showing China's most critical flood zones.

Meanwhile, competition in one of the world's biggest insurance markets has driven the cost of property cover 20 to 30 percent below what it is in other Asian markets, said Alex Yip, China chairman and general manager of insurance broker and corporate advisor JLT Lixin.

Price competition last year was so brutal that China's No. 2 insurer by market capitalization, Ping An, recorded a nearly 200 million yuan ($31 million) loss on its corporate property and casualty underwriting, despite no major flood loss claims.

Ping An said in an email it cares more about the big picture than the profitability of individual policies. In 2011, Ping An's property and casualty division overall made a net profit of just under 5 billion yuan ($785 million).

Flood insurance in China is typically sold as part of a general property policy and does not have an upper claims limit, industry experts said. Rapid development and high levels of foreign investment mean the amount insurers are on the hook for in the next major flood has gone up.

"For floods and for earthquakes, to be honest, for international standards, the price is inadequate," said Zhang Qing, the Beijing-based general manager for State-owned PICC Property & Casualty Co's reinsurance business.

A recent study by Texas A&M University and Yale University shows the amount of developed land in low-elevation coastal areas in China is skyrocketing. In 2000, 13,500 sq km (5,200 sq miles) of low-elevation coastal land had been built up. By 2030, that is set to nearly quintuple to 63,600 sq km (24,500 sq m), an area nearly as large as the Netherlands and Belgium combined.

Another study, in the journal Irrigation and Drainage in 2010, said one third of China's farmland, two-thirds of its people, more than 60 percent of its cities and 80 percent of its GDP were threatened by floods.

Maryam Golnaraghi, chief of the World Meteorological Organization's disaster risk reduction division, said Chinese data is often not detailed enough to be useful - and that some government agencies feel information on water flows is too sensitive to share.

Thailand is Asia's most developed auto parts market and a hub for the likes of Toyota, Honda and Mercedes-Benz, making cars and car parts the country's No. 1 export this year. The floods disrupted more than 100 components makers.

Over the past year, property insurance rates in Thailand have doubled or tripled and flood cover greatly reduced or even refused in some cases, said Jiraphant Asvantanakul, president of The General Insurance Association of Thailand.

Manufacturers such as Toshiba are moving machinery to the second storey, setting up sister operations in other countries and finding back-up warehouses and suppliers, though the bulk of operations remain in Thailand.

"I think the factories will stick with Thailand because the supply chain network is still very strong ... it is not that easy to move," said Kobkarn Watanavarangkul, executive chairwoman of Toshiba's Thai unit.

Toshiba's factories are in the Bangkadi industrial estate, one of seven parks built on former rice paddies on floodplains north of Bangkok that were inundated last year, affecting companies such as Sony, Canon and Honda.

Close to where workers were toiling to build new flood defenses to protect the complex was a bronze statue of an elderly couple standing on sandbags.

They are the estate's founders and the statue commemorates a flood in 1995 in which 1 million sandbags were used to fend off high waters, a reminder that this is not the first time the estate has been threatened.

Insurers and reinsurers are also worried about dense concentrations of factories in other parts of Asia, particularly in and around the Indonesian capital Jakarta, where floods in 2005 and 2007 hit large areas.

The low-lying coastal city has 13 rivers flowing through it, is subsiding in parts and faces rising sea levels. It is the nation's manufacturing base with U.S., European and Japanese firms operating factories.

In Cikarang, east of Jakarta, five industrial estates with more than 3,000 plants employ over 1 million people.

Farny of Munich Re said natural catastrophe awareness was growing only slowly among insured firms and governments.