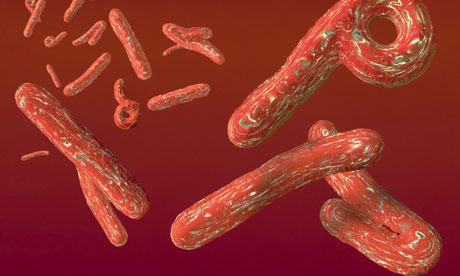 Terrified patients fled from a hospital in western Uganda as soon as news broke that a mysterious illness that killed at least 14 people in the region was Ebola, one of the world's most virulent diseases.

Ignatius Besisira, an MP for Buyaga East County in the Kibaale district, said people had at first believed the unexplained deaths were related to witchcraft. "Immediately, when there was confirmation that it was Ebola … patients ran out of Kagadi hospital (where some of the victims had died)," he told the Guardian. "Even the medical officers are very, very frightened," he said.

Government officials and a World Health Organisation representative confirmed the Ebola outbreak at a news conference in Kampala on Saturday. "Laboratory investigations done at the Uganda Virus Research Institute ... have confirmed that the strange disease reported in Kibaale is indeed Ebola haemorrhagic fever," they said in a joint statement.

Health officials said at least 20 people had been infected and of those 14 had died.

There is no treatment or vaccine against Ebola, which is transmitted by close personal contact and, depending on the strain, can kill up to 90% of those who contract the virus.

It has a devastating history in Uganda, where in 2000, at least 425 people were infected, of whom more than half died. Ebola was previously reported in the country in May last year, when it killed a 12-year-old girl.

During an outbreak in 2007, which claimed at least 37 lives, President Yoweri Museveni advised people not to shake hands and public gatherings were also discouraged.

One of those who succumbed to the outbreak in Kibaale was a clinical officer, Besisira said. The other fatalities came from a single household in Nyamarunda subdistrict, he added.

Joaquim Saweka, WHO's representative in Uganda, said the suspected infections emerged in the region in early July but the confirmation came only on Friday.

The Ugandan government said a national emergency taskforce had been set up and urged the population to remain calm. The government, WHO and the US Centres for Disease Control have sent experts to Kibaale to tackle the outbreak.

Besisira said officials in Kibaale had released radio broadcasts outlining precautionary measures on Saturday. "We have assured (the people) that we have a very strong team … who are making sure the disease is controlled … I am very confident we can contain it," he added.

Besisira had not heard of people moving out of the region, but the Daily Nation newspaper in neighbouring Kenya said on Sunday that people were leaving the area around Kagadi town, where the disease first appeared.

"We have to move to safer places because we can easily get infected by this disease here," the paper quoted a resident, Omuhereza Kugonza, as saying.

The WHO describes Ebola as "a viral haemorrhagic fever and one of the most virulent diseases known to humankind". It says the disease was identified in 1976 in a western equatorial province of Sudan and a nearby region of Zaire (now Democratic Republic of the Congo). It takes its name from a river in the DRC.

Kibaale is near Uganda's border with the DRC.

Ebola is transmitted by direct contact with the body fluids and tissues of infected persons. It can also be transmitted by handling sick or dead infected wild animals, such as chimpanzees, gorillas, monkeys, forest antelope and fruit bats.