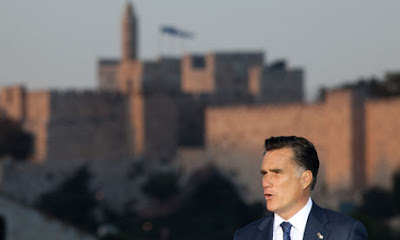 Mitt Romney has made a staunch declaration of unity with Israel against the Iranian nuclear threat, pledging that the US "will not look away" in the face of an existential challenge faced by the Jewish state.

In his first foreign policy speech, delivered against the dramatic backdrop of the walls of Jerusalem's Old City, the presumptive Republican candidate insisted that the US must use "any and all measures" to prevent a nuclear Iran.

"In the final analysis, of course no option should be excluded. We recognise Israel's right to defend itself, and it is right for America to stand with you," said Romney.

Echoing Israeli prime minister Binyamin Netanyahu's comparisons between a nuclear Iran and the Holocaust, Romney said: "We have seen the horrors of history. We will not stand by. We will not watch them play out again."

He denounced the Iranian regime as a "radical theocracy", saying it was the "leading state sponsor of terrorism and the most destabilising nation in the world. We have a solid duty and a moral imperative to deny Iran's leaders the means to follow through on their malevolent intentions".

Earlier, a senior Romney aide said the candidate would back unilateral military action by Israel against Iran's nuclear sites. "If Israel has to take action on its own, in order to stop Iran from developing that capability, the governor would respect that decision," Dan Senor, Romney's senior national security aide, told reporters.

Romney's speech touched many key buttons for his target audience of Jewish voters in the US. He said he was deeply moved to be in Jerusalem, "the capital of Israel", and he referred to "my friend" Netanyahu. He dwelt on the resilience, creativity and innovation of the Israeli people, and he remembered the 11 Israeli athletes murdered at the Munich Olympics 40 years ago.

In veiled criticism of US president Barack Obama, Romney said: "We must not delude ourselves into thinking containment [of the Iranian threat] is an option." The US, he said, should "certainly not join in criticism of Israel. Diplomatic distance in public between our nations emboldens Israel's adversaries".

Apart from a brief reference to Hamas firing rockets into southern Israel, there was not a single mention of the Palestinian issue, or a possible settlement to the Israeli-Palestinian conflict. The issue also did not come up at a meeting between Romney and Netanyahu earlier in the day, according to Zalman Shoval, a former Israeli ambassador to the US, who was present. "The Israeli-Palestinian conflict right now is ... not number one," Shoval said.

That meeting also focused on the Iranian nuclear issue, with Netanyahu saying: "We have to be honest that sanctions have not set back the Tehran program one iota, and that a strong military threat coupled with sanctions are needed to have a chance to change the situation."

Before the speech, Romney visited the Western Wall in the Old City, an iconic site for Jews, where he inserted a written prayer into cracks between the historic stones. He also met Israeli president Shimon Peres and Palestinian prime minister Salam Fayyad.

Romney's visit, part of a three-nation tour encompassing the UK and Poland as well as Israel, was intended as a showcase for his robust support for Israel and his personal friendship with Netanyahu.

He hoped to appeal to Jewish voters in the US ahead of November's presidential contest by sharply differentiating his position from that of Obama, who has put intense pressure on Israel's leaders to refrain from a military strike against Iran, at least until sanctions and diplomacy have been given time to produce results.

However, the Israeli daily Haaretz reported that a senior US official briefed Netanyahu two weeks ago on America's contingency plans for possible military action in the event of sanctions and diplomacy failing.

National security adviser Tom Donilon shared details of the preparations, including US weaponry and military capability for striking underground facilities, during a three-hour meeting with the Israeli prime minister, according to the report which was sourced to "a senior American official".

The timing of the story suggest a desire by the administration to pre-empt Romney's presentation of himself as a more robust supporter of tough action against Iran than Obama.

The report was denied by a senior Israeli official, who said: "Nothing in the article is correct. Donilon did not meet the prime minister for dinner, he did not meet him one-on-one, nor did he present operational plans to attack Iran."

Romney's efforts to win over American Jewish voters are having limited success, according to a recent opinion poll, which puts support for Obama at 68% among US Jews compared to 25% for the Republican candidate. Although a drop from the 75% of American Jews who backed Obama in the 2008 election, the latest figures also represent sliding support for Romney compared to a Gallup poll in June, which gave 29% of the Jewish vote to the Republican and 64% to Obama.

Romney's visit fell on the Jewish religious day of Tisha B'Av, a day of fasting and mourning the destruction of the first and second temples. A fundraising event had to be postponed until Monday morning when it was realised it had been scheduled before the end of the fast at sunset.

Following controversy over Romney's comments on the preparedness of London to host the Olympic Games, his aides were anxious to avoid further gaffes. Media access to events during the visit have been tightly restricted, and there were no opportunities to put questions to him.

Romney and his entourage are to fly to Poland on Monday.

Posted by seemorerocks at 10:46