Barrick Says Cost of Pascua-Lama May Jump to $8 Billion
Barrick Gold Corp. (ABX), the world’s biggest producer of the metal, said the estimated cost of building a mine in the Andes may jump to about $8 billion because the project is more complex than it had anticipated. 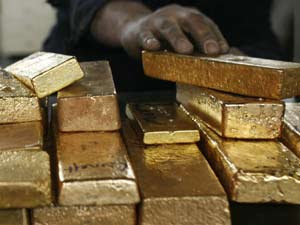 Barrick Chief Executive Officer Jamie Sokalsky is revising costs and reviewing the company’s other development projects after taking over last month from Aaron Regent, who was fired. Barrick raised Pascua-Lama’s cost estimate by $1.4 billion a year ago. The latest increase is “outrageous” and suggests “a lack of controls,” said George Topping, an analyst at Stifel Nicolaus & Co. in Toronto.

“You have to question at what point did they know about this and whether they actually should be proceeding with it at this point,” Topping, who recommends buying the shares, said today in a telephone interview.

Barrick dropped 4.2 percent to C$33.04 at the close in Toronto. The shares have declined 28 percent this year.

“Based on information gathered to date, it is apparent that the challenges of building a project of this scale and complexity were greater than we anticipated,” Barrick said in the statement.

“Rate of return should drive production, not the other way around,” Sokalsky said in the statement.

Second-quarter profit trailed analysts’ estimates after production fell and costs rose more than expected. Net income fell 35 percent to $750 million, or 75 cents a share, from $1.16 billion, or $1.16, a year earlier.

Profit excluding one-time items was 78 cents a share, missing the 93-cent average of 22 estimates compiled by Bloomberg. Sales declined to $3.28 billion from $3.42 billion.

Gold futures averaged $1,613 on the Comex in New York in the quarter, 7 percent higher than a year earlier. Prices have posted 11 consecutive annual gains.

Barrick reaffirmed its gold production forecast for this year of 7.3 million to 7.8 million ounces. Copper production will be 460 million to 500 million pounds, compared with an earlier forecast of 550 million to 600 million, because of lower output at the Lumwana mine in Zambia.