Image of the Day: Satellite view of Colorado forest destruction by beetles, 2005-2011 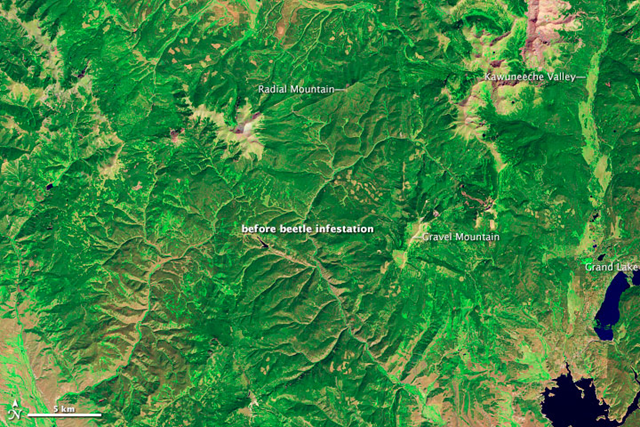 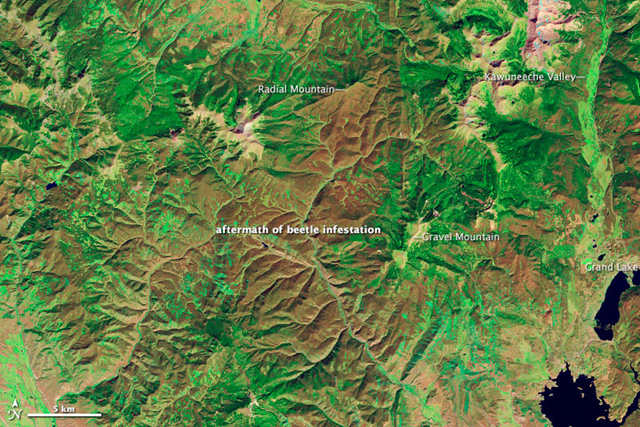 A single pine bark beetle is about the size of a grain of rice. But when the beetle population swells, it can have a major impact on forest health. And that’s exactly what has been happening across the Rocky Mountains over the past decade.

In Colorado, severe beetle infestations showed up in lodgepole pine forests about 50 miles west of Boulder and Fort Collins around 2000. Over time, the affected area grew so that by 2011 the infestation had spread east to ponderosa pine forests that were much closer to the two cities. (A map showing the progression between 1998 and 2011 is available here).

The beetle epidemic caused so many trees to die-off that the impacts are visible from space. The Thematic Mapper on Landsat 5 acquired these images of lodgepole pine forests near Grand Lake, Colorado on September 11, 2005, and September 28, 2011—before and after a severe infestation led to die-off of the tree canopy.

Over six years, beetle activity turned entire ridges and valleys brown. Forest die-off is most visible in the center of the image and along both sides of the Kawuneeche Valley. The brownest areas in the 2011 image are generally stands of lodgepole pine, a slender tree that grows at 6,000 to 11,000 feet (1,800 to 3,300 meters) in elevation. Either spruce or aspen dominates the green areas that escaped infestation, such as the forests near Gravel Mountain and areas west of the Kawuneeche Valley.

Not all of the browning is due to beetles. In the upper central and lower right of the image, logging has also had an impact. And despite the beetle damage to the upper canopy, the forests are anything but dead. Even in the most severely affected areas, large numbers of trees survive.

It has been suggested that all the dead needles and trees trunk left after a beetle infestation must make wildfires more common and severe. It wasn’t uncommon for beetles to get the blame for exacerbating the destructive High Park fire that raged near Fort Collin in June 2012.

However, Bill Romme, a Colorado State University professor who has studied the relationship, is not convinced. “Most research indicates that there is little or no such relationship between beetle-caused tree mortality and subsequent fire occurrence and severity in lodgepole pine forests,” he noted in an email. “Fire occurrence and severity in these forests are controlled primarily by weather conditions. Variation in fuel conditions, such as that introduced by the beetles, is a secondary and generally minor influence on fire behavior.”

Thomas Veblen, the head of a biogeography research group at the University of Colorado that has also studied the link between beetles and fires, shares Romme’s skepticism. One of the telling features of the image pair above, Veblen noted, is the lack of burn scars. Beetles started attacking the area during the early 2000s; but even as trees have been dying, there has not been a significant fire.

“While dead trees from pine beetles provide a teachable moment for discussing fire hazard, the underlying factor explaining the increase in area burned across the western U.S.—which is well documented—since the 1980s is warming,” Veblen said.
Posted by seemorerocks at 11:19