For the first time in three years, US Quarterly Earnings are Poised to Drop.

Third-quarter earnings of Standard & Poor's 500 companies are now expected to fall 0.1 percent from a year ago, a sharp revision from the July 1 forecast of 3.1 percent growth, Thomson Reuters data showed on Thursday.


That would be the first decline in earnings since the third quarter of 2009, the data showed.

Earnings in the tech sector are now expected to rise only 5.8 percent — less than half the forecast of 13.1 percent growth, according to an estimate at the start of the month, Thomson Reuters data showed.

The materials sector is forecast to see an earnings drop of 11.4 percent for the third quarter, worse than the forecast of a 3.3 percent decline at the start of July, Thomson Reuters data showed. Slumping commodity prices and reduced demand from China have hurt that sector.


While earnings performance has held up so far for the second quarter — with results in from about half of the S&P 500 companies — revenue has looked much gloomier.

Just 41 percent of companies have beaten revenue estimates, the lowest since the first quarter of 2009 and only the fourth time in the past 10 years that the beat rate was under 50 percent.


In spite of those downgrades, history suggests corporations will still "Beat the Street".

even in 2008 and 2009 the majority of firms beat estimates. Here is the way the process works:


Percentage of Companies that "Beat the Street" 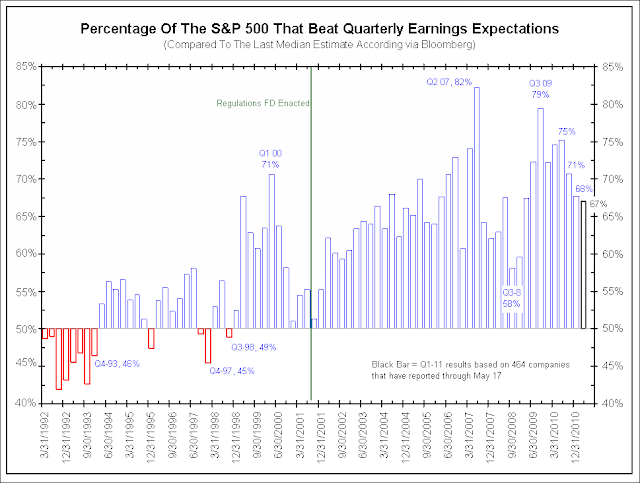 
The above chart from Understandings Earnings Estimates by James Bianco on the Big Picture Blog.

Inquiring minds may be interested in charts of corporate profits. 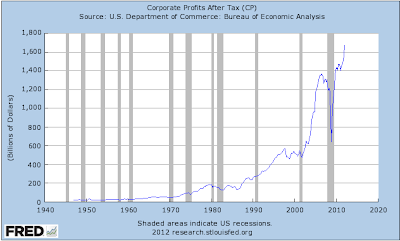 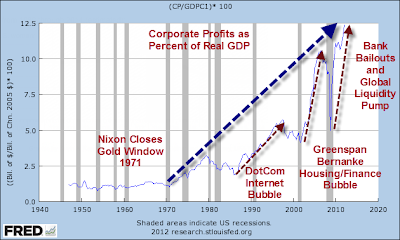 Government sponsored repatriation tax holidays along the way also added to corporate profits, as did the Fed paying interest on Excess reserves now sitting at about $1.5 trillion parked at the Fed.


Little of this benefited the real economy or produced any lasting jobs. Housing and finance jobs collapsed in the global financial crisis and are not coming back. Nor is another internet boom on the horizon.


With each crisis, the shrinking middle class has suffered at the expense of banks and corporations able to export jobs and capital. Small US Corporations not able to get the same tax benefits as GE, Apple, Google, Microsoft, etc., have not benefited from Fed policy.


Read more at http://globaleconomicanalysis.blogspot.co.nz/#88H7kIy1EmcXwTRj.99
Posted by seemorerocks at 12:30