Israel and US talk war?

Panetta and Israel to discuss war plans against Iran?
Israeli officials are denying reports that the White House has provided them with a contingency plan in case of a showdown with Iran. Nevertheless, the head of America's Defense Department is gearing up for a week of talks in the Middle East. 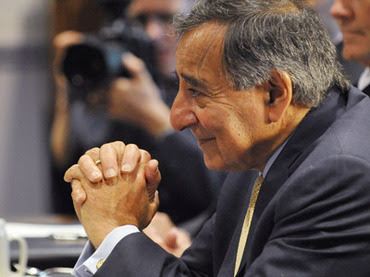 US Defense Secretary Leon Panetta is overseas now as he begins a busy week of meetings with Middle East leaders across the region. The Pentagon chief is expected to sit down with Israeli Prime Minister Benjamin Netanyahu this week, despite a rumored contingency plan discussed between both allied nations becoming a heated issue of debate in recent days.

A senior US official speaking on condition of anonymity told Israel’s Haaretz newspaper over the weekend that US National Security Advisor Tom Donilon briefed Israeli authorities on an American-penned contingency plan earlier this month. According to those reports, the Obama administration is ready to aide Israel in the event that attempts to lower tensions with Iran cannot be carried out with diplomacy, which could involve attacking Iranian nuclear facilities if authorities there will heed Israel’s plea to end any nuke procurements. Even as tensions heat up between Iran and Israel, though, America’s allies are refusing to confirm the accusations.

"Donilon did not meet the prime minister for dinner, he did not meet him one-on-one, nor did he present operational plans to attack Iran," a senior Israeli official speaking anonymously to Reuters insists. That denial, published Sunday, challenges the report published by one of the most popular Israeli newspapers, Haaretz, that Donilon presented the plan to Netanyahu two weeks earlier at a lengthy dinner that also reportedly included Israeli National Security Advisor Yaakov Amidror.

Regardless of which side is in the right, both agree that Sec. Panetta has a busy week of Middle East talks planned ahead, including a guaranteed sit-down with Israel’s top officials. He arrived in Tunisia on Sunday and will make stops in Egypt, Syria, Iran and Israel. And contingency plan or not, the ongoing issue of a potential war with Iran is all too certain to be brought into discussion.

“With Israel, we have achieved a level of defense cooperation that is unprecedented in our history and my goal is to deepen and strengthen that relationship even further,” Panetta told reporters while en route to the Middle East.

According to Bloomberg News, Sec. Panetta added that the Israelis have “not made any decisions on Iran and continue to support the international effort to bring pressure on Iran to pull back from their effort to develop a nuclear capability.” Earlier this year, Panetta said he believed that Israel was “likely” to attack Iran in the spring. The US has since mobilized a massive flux of military personnel towards Iran in case of a showdown, and both President Barack Obama and likely GOP challenger Mitt Romney have gone on the record to say that all options are still on the table in terms of attacking Iran.