The UK during the Olympics

With thanks to Travellerev

On Standard & Poor, UK’s tripple A and Bully Boys or Why London Lives in LaLa Land

Standard & Poor's announced that the UK will keep their coveted triple A rating and while Chancellor Osborne, he of Bully boy fame, enthused about the announcement as the confirmation that the globe still had confidence in England after the disastrous 0.7 $ shrinkage of UK's GDP here is why you might conclude that perhaps Standard & Poor has an alternative motive to keep the UK ratings to triple A.

First of all let me bring out my favourite graph of the moment again: 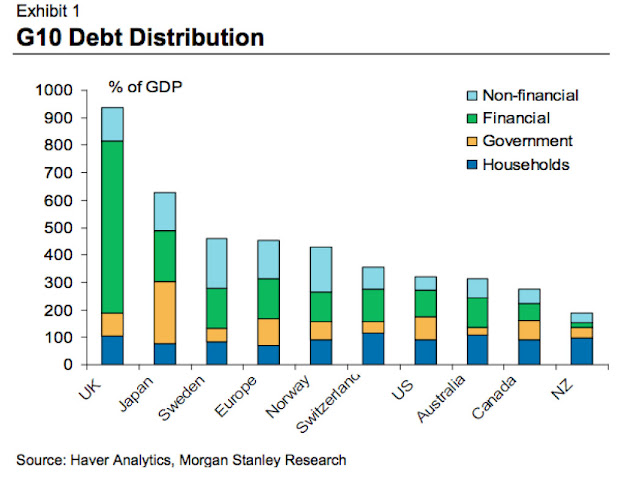 As you see the financial sector in the UK is about 6x the GDP. This is because the only sector in the UK making any money IS the financial sector. The financial sector is primarily the trade in bonds and Derivatives which as we all know are worth less than the paper they are written on and currently collapsing the entire financial system.
The only reason why London as a banking town still survives is because London is where every bank does its Derivatives trading as London is the most deregulated least transparent banking system. Pundits like Max Keiser call it a cesspool and not without reason.
The JP Morgan "Whale "trading loss" due to irresponsible gambling was made in London. Merrill Lynch John Key's former boss made its 75 trillion trading loss in London and as the future will show London already heavily exposed to the Spanish and Russian financial world will be the epicentre of the financial Armageddon heading our way.
What is interesting and terrifying to know in the mean time is the fact that the UK in an of itself produces next to nothing in the real world to sustain its population. With a manufacturing base of just 13% and the Agricultural sector adding a mere 2% to the UK GDP  we are looking at a country which relies entirely on the scam of modern fiat currency creating money out of thin air. Every man woman and child depends for their income and livelihood whether it is their job at Tesco, MacDonalds, the pump station or being on the dole on London's financial terrorists to continue to trade.
Not only that; every bank in the world relies on London being able to continue. The people at  Standard & Poor know this and their only choice is to keep giving London their triple A rating. If they don't its game over!