This is part of a worldwide trend for oil refineries to close.

Dark day as Caltex turns off the tap
Australia will increase its dependence on foreign sources of oil with the decision by Caltex to close the Kurnell refinery - the second of Sydney's two oil refineries - with the loss of several hundred jobs. 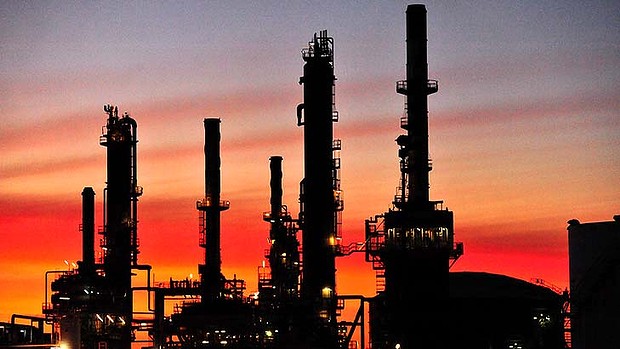 Caltex said the refinery, on Port Botany, south of the city, will be converted to an import terminal at a cost of $680 million. As a result, more than 330 in-house employees will lose their jobs, and the jobs of an unspecified number of the 300 contractors who also work at the plant are at risk.

Minister for Resources and Energy Martin Ferguson insisted the closure would not jeopardise Australia's energy security, since the country already imported large amounts of crude oil and finished petroleum products.

''This decision will see imported supplies of crude oil being replaced by imported refined product,'' he said.

Caltex said it would buy refined oil from Singapore, Korea and India for sale in the local market.

Victoria has a production capacity of 190,000 barrels a day between its two refineries in Altona and Geelong.

Caltex said Kurnell lost $208 million last year and another $60 million in the first three months of this year, which had forced its hand on the closure.

Union leader Paul Howes was critical of the shutdown, describing it as ''duplicitous'' behaviour.

''Almost 800 workers here at Caltex Kurnell have been delivered a massive kick in the guts,'' Mr Howes, the national secretary of the Australian Workers Union, said yesterday of the decision.

Mr Howes said the AWU would launch an advertising campaign to inform Australians that their petrol was no longer Australian.

Graeme Grace, an oil refinery operator, said he felt ''betrayed'' by Caltex's decision. For the past year, staff had been ''working our butts off'' and succeeded in making the refinery more efficient.

''I've been a refinery operator for over 30 years; as refineries are shutting down, I've got nowhere else to go,'' Mr Grace said. ''At my age I'm not going to get a job on one of the new gas projects.''

Caltex said the shutdown and the heavy round of retrenchments would ensure the company survived.

''We have taken a decision that's going to secure the position of Caltex,'' managing director Julian Segal said yesterday. The closure would not influence petrol prices, he said, which were set by market competition.

Woolworths, which sells about a third of Kurnell's output, said the closure would not affect its retailing operations.

Caltex said it would spend $260 million to remediate the site, with the work to begin in 2015, once refining had been halted. The work was expected to take several years.