I wonder if the BBC has given equal coverage to British government attempts to suppress the internet. 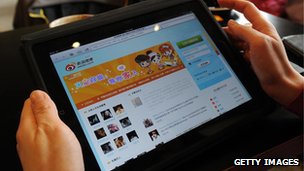 As of June, 3.2 million "harmful" messages had been deleted and 30 internet service providers punished for granting access to unlicensed sites, the Ministry of Public Security said.

The crackdown targeted pornography and the illegal sale of personal details.

But some say it is being used to censor online criticism of the government.

"Although illegal and harmful information on the internet has been sharply reduced through intensified crackdowns, fraudulent messages are still seen occasionally," said a statement from the ministry quoted by the official Xinhua news agency.

"And some telecom service providers are not strict enough when managing websites."

Crimes targeted in the crackdown also included the trading of weapons online, the illegal use of surveillance equipment and the creation of fake professional certificates, the ministry said, adding "harsher punishments for perpetrators" were planned.

The statement coincided with reports from some of the country's local authorities about their own efforts.

Beijing's police force said it had arrested 5,007 people suspected of internet-related crimes and closed 263 internet cafes as part of its efforts to "protect the physical and mental health of young people" using the web.

Revealing the numbers, the chief of the Beijing Public Security Bureau, Fu Zhenghua, warned users they faced being severely punished if they "attacked" the country's leaders online.


Beijing police said they had inspected more than 10,000 internet cafes in the city
Three of the country's major Twitter-like micro-blog services - including Sina Weibo - are based in the city.

However the local Global Times newspaper said the public was concerned the authorities had not defined what counted as an "attack" or "political rumour" that would warrant punishment.

It said some citizens feared the campaign could be used to "mute online criticisms of the government".

"It's increasingly difficult for the authorities to control what people are saying bearing in mind the rise of 'netizens' - individuals sharing their opinions over the internet," Oliver Barron, from the investment bank NSBO, told the BBC.

"People have felt that they could speak out because of the anonymity the net offered, which is why the government is now cracking down on this, demanding that people register their accounts with their real names."

Elsewhere, police in Jieyang in the south-east province of Guangdong reported they had "cracked" the biggest case of hacks against government sites in recent years.

Xinhua reported that 165 people had been arrested and further suspects were being hunted in connection with attacks on 185 official websites.

The suspects are accused of making more than 7,000 fake certificates, which they are said to have sold for more than a total of 300 million yuan ($47m; £30m).

Such certificates are commonly used to secure jobs, allowing a user to claim an educational qualification they do not have, or to avoid lengthy and costly administrative procedures to gain a driver's licence or residence permit.

"The gang tampered with official databases or added links to external databases so that if anyone checked up on the fake certificates, the client's name would appear," said Chen Xiaoping, head of Jieyang police's cybercrime unit.