Click for the financial advice if you like (I won't) …. Despite that these finance guys do have their fingers on the pulse

Europe Can and Will Cause a Systemic Collapse… Are You Ready?

A lot has been said about the European Crisis. I’m going to explain it all in simple terms.
In simple terms, today we are facing a Crisis that is far, far worse than 2008. Before it ends, it is quite possible that we will see the entire Western Financial System collapse and a new system put into place.
This will mean:
1)   Many major banks disappearing, as well as numerous potentially lengthy bank holidays (think Argentina in 2001)
2)   Multiple sovereign defaults as well as broad economic contractions and their commensurate unemployment/ civil unrest/ erasure of retirement accounts/ pensions (this process has already begun in some US municipals, e.g. San Bernandino and Stockton California as well as Harrisburg Pennsylvania).
3)   Possibly new currencies being introduced or new denominations of currencies (say one new unit being worth 1,000 of the old one)
4)   Massive wealth destruction to the tune of tens of trillions of Dollars (think MF Global i.e. the money is gone… only systemically… in fact we just had another such instance with PF)
5)   A global contraction that will result in new political/ power structures being implemented as well as the breakup of various countries/ unions.
6)   Very serious trade wars to begin (see Obama’s recent attack on China) and very possibly a real war.
If the above make you frightened, you’re not alone. As I’ve dug deeper and deeper into the inner workings of the global financial system over the past months, the information I’ve come across has only gotten worse. I’ve been holding off writing all of this because up until roughly April/May it seemed possible that the world mightveer towards another outcome.
I no longer view this to be the case. I am almost certain that what I’ve written above will come to pass. I know that much of what I’ve written to you in the past could be labeled as “gloom and doom.” However, I want you to know that I do not use the words “systemic collapse” lightly. Indeed, I wish I wasn’t mentioning them now, but I’d be doing you a disservice not to bring them up because we’re well on our way towards it.
So buckle up and let’s dive in.
In order to understand why we’re at risk of the financial system collapsing, you first need to understand how the global banking system works. When you or I buy an asset (say a house, or shares in a stock, or a Treasury bond), we do so because we’re looking to increase our wealth through either capital gains or through the income that asset will pay us in exchange for us parking our capital there.
In simple terms, you’re putting/ lending your money somewhere (especially if you’re buying a bond) in the hope of increasing the value or your money.
This is not how banks work. When a bank buys something, especially a bond, it parks that bond on its balance sheet as an “asset.” It then lends money out againstthat asset. This in of itself is not problematic except for the fact that the financial modeling of 99% of banks base assume that sovereign bonds are “risk-free.” Put another way, these models assume that the banks will always get their money back on 100 cents on the Dollar.
Yes, you read that correctly, despite the fact that world history is replete with examples of sovereign defaults (in the last 20 years alone we’ve seen more than 15 including countries as significant as Russia, Argentina, and Brazil), most banks assume that the sovereign bonds sitting on their balance sheets are risk free.
This phenomenon occurs worldwide, but given that it will be Europe, not the US that takes the system down, I’m going to focus on European bank models/ capital ratios.
You may or may not be familiar with EU banking law. EU banks are meant to comply with Basel II which is a series of capital requirements and other specifications meant to limit systemic risk.
In terms of capital ratios, Basel II requires that EU banks have equity and Tier 1 capital equal to 6% of risk weighted assets. On paper this idea was supposed to limit bank leverage to 16 to 1 (the bank has €1 in capital or equity for every €16 in loans).
However, the term “risk weighted assets” destroys this premise because it means that the bank’s loan portfolio and ultimately its leverage ratio are based on the bank’s in house models/ assumptions concerning the risk of its loans.
Let me give you an example…
Let’s say XYZ Bank lends out €50 million to a corporation. The bank won’t necessarily claim that all €50 million is “at risk.” Instead, the bank will claim that only a percentage of this €50 million is “at risk” based on the company’s credit rating, financial records (debt to equity, etc), and the like.
Thus, based on “in-house” risk modeling, European banks could in fact lend out much, much more than the Basel II requirements would imply. Considering that both bank profits and executive compensation were/are closely tied to more lenient definitions of “risk-weighted,” (i.e. lend as much as you possibly can) it’s safe to assume that EU banks are in fact much, much more leveraged.
Indeed, according to the IMF’s “official” analysis, EU banks as a whole are leveraged at 26 to 1. I would argue that in reality many of them are well north of 30 to 1 and possibly even up to 50 or 100 to 1.
The reason I can claim this with relative certainty is because the EU housing bubbles dwarfed that of the US. In the chart below the US housing bubble is the lowest line. After it comes Britain (blue) and Italy (orange) then Ireland (green) and finally Spain (dark blue). 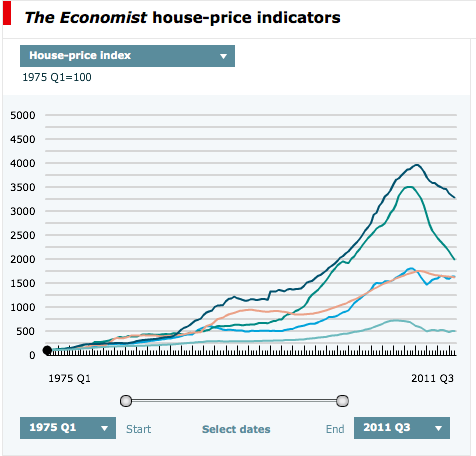 You can only get bubbles of this magnitude if you’re lending to literallyanyone with a pulse. And you can only lend that much if your in-house risk models believe that the risk of lending to anyone with a pulse is much, much lower than reality.
Hench, EU banks are likely leveraged at much, much more than 26 to 1. Indeed, considering how leveraged and toxic US banks’ (especially the investment banks’) balance sheets became from the US housing bubble, the above chart should giveeveryone pause when they consider the TRUE state of EU bank balance sheets.
This fact in of itself makes the possibility of a systemic collapse of the EU banking system relatively high.
With that in mind, I’ve begun positioning subscribers of my Private Wealth Advisory for the next leg down in the markets. We’ve already locked in over 30 winning trades this year by finding “out of the way” investments few investors know about and timing our positions to benefit from the various developments in Europe and the global economy.  When you combine this with our 2011 track record, we’ve had 72 straight winners and not one closed loser since July 2011.
Indeed, we just locked our 72nd winner yesterday: a 9% gain in less than a month
To learn more about Private Wealth Advisory and how it can help you get through the EU Crisis with gains… NOT pains…
Click Here Now!!!
Best Regards,
Graham Summers
Chief Market Strategist
Phoenix Capital Research