Aleppo blame game: Conflicting reports from the ground in Syria
Syria’s main commercial hub, Aleppo, was rocked with violent clashes overnight, but there are conflicting reports as to who was responsible for the fighting. Mainstream media is siding with the rebels, while witnesses say the rebels are to blame. 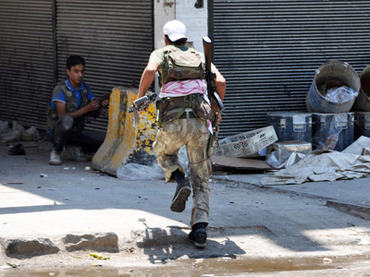 Mainstream media outlets report the Syrian regime is gearing for a “massacre,” as it launches deadly ground and air attacks on rebels.

According to AP, military helicopters pounded the city early Saturday morning, in an effort to clear the area of anti-Assad forces once and for all.

But others say the clashes began after rebels attacked government buildings in the area.

Sarkis Kassargian, a reporter for Al-Khabar TV, told RT,“Last night, rebels attacked government buildings and police and intelligence centers in Aleppo. But they didn’t succeed to control any of those places. Attacks and clashes then occurred, but the Syrian army was acting in defense.”

Three rebel fighters were killed in the fighting on Saturday, and 160 were killed on Friday, according to the Syrian Observatory for Human Rights.

But Kassargian says those deaths were due to the rebels’ own actions.
“Any deaths that took place would have been a result of the rebels’ attacking government buildings in the region,” says Kassargian.

It is a far cry from mainstream media reports, which say government troops attacked rebel forces without provocation.

He says rebel forces have now taken control of the neighborhoods of Al Hadi and Al Saher.

While mainstream media reports that residents of Aleppo are fleeing the city in droves, RT’s source maintains this is not the case.

“Right now, there is no movement from government forces. Some families and residents in Aleppo are leaving the city, but most people are just moving to safer areas within the area, such as a local school and university. The Red Cross is standing by to help those seeking shelter,” Kassargian said.

Aleppo is seen as a key city in the rebels’ fight against Assad’s forces.
The city is Syria’s economic hub, and both sides feel they need it to win the fight. All eyes are seemingly on Aleppo, as rebels and forces loyal to Assad struggle to gain the upper hand.

Aleppo sits on the border with Turkey – a country which has shown recent support for Syrian rebels.

With the help of Qatar and Saudi Arabia, Turkey recently set up a secret anti-Assad base in Adana, 100km from the border.

The base devises tactics and supplies weapons for the uprising, according to Reuters.

But Turkey is not the only country taking an interest in the fight against Bashar al-Assad, which concerns the Kremlin.

Russia has warned of a “tragedy” in Aleppo, saying international support for the rebels would lead to “more blood.”

During a statement at a news conference, Russian Foreign Minister Sergey Lavrov said the Syrian government could not be expected to stand by while rebel forces occupy Aleppo and other areas throughout the country.

“Our Western partners, together with some of Syria's neighbors, are essentially encouraging, supporting and directing an armed struggle against the regime,” said Lavrov.

“There has been an enormous increase in the capabilities of the armed opposition and it’s down to issues like organization – which depends on communication. The Syrian government is responding in a way that any government would do if faced with a situation of urban warfare,” Shoebridge told RT.
Posted by seemorerocks at 11:09