Call for US domestic use of spy drones

DHS wants to use spy drones domestically for 'public safety'
The United States already uses surveillance drones on its borders, but Homeland Security Secretary Janet Napolitano said during a hearing on Wednesday that flying unmanned aircraft inside the US could be the next step to ensuring “public safety.” 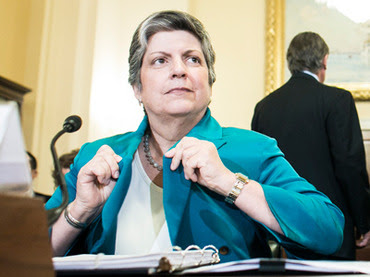 Sec. Napolitano weighed in on the topic of unmanned aerial vehicles during this week’s Committee on Homeland Security and suggested that implementing UAVs for domestic surveillance could the next step in the United States’ amazingly accelerating drone program.

The Federal Aviation Administration is currently considering ground rules that will outline how the FAA can govern domestic drone use, and by 2020 they expect to see 30,000 UAVs soaring through US airspace. Speaking before a House panel on Wednesday, though, Sec. Napolitano suggested that deploying UAVs proactively to put an extra set over locales nowhere near America’s border may in fact be the next move.

“With respect to Science and Technology, that directorate, we do have a funded project,” she said. “I think it’s in California, looking at drones that could be utilized to give us situational awareness in a large public safety [matter] or disaster, such as a forest fire, and how they could give us better information.”

In a transcript of the secretary’s testimony made available after her address, Napolitano admits that the US has expanded their use or surveillance drones on America’s border with Canada in recent years, now letting UAVs monitor 950 miles of Washington State’s boundary line.

Despite growing opposition from the American public of drones largely centered over privacy objections, the United States has continuously ramped up its drone program in recent years, both domestically and abroad. During the Hackers on Planet Earth conference in New York City earlier this month, activists with the Electronic Frontier Foundation said that US military now owns around 7,500 drones, which makes up around one-third of the Air Force’s entire arsenal.

“The FAA can give drone licenses to any agency that can prove that they can use them safely,” the EFF’s Trevor Timm told the crowd. Despite dozens of permits being handed out to law enforcement agencies and educational institutions in recent years, though, neither the security nor safety of these aircraft are believed to have been fully examined. In just the last few weeks, a Texas professor hacked a UAV in front of representatives from the DHS and, separately, a military drone crash-landed just outside of Washington, D.C.

Despite these incidents, the FAA and DHS are still spearheading an accelerated drone program. Given Sec. Napolitano’s latest statements, though, the domestic use of drones for proactive surveillance could be coming more sooner than previously though.
Posted by seemorerocks at 11:03