Evidence for climate extremes, costs, gets more local
Scientists are finding evidence that man-made climate change has raised the risks of individual weather events, such as floods or heatwaves, marking a big step towards pinpointing local costs and ways to adapt to freak conditions. 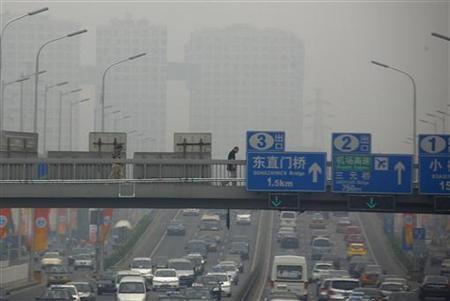 "We're seeing a great deal of progress in attributing a human fingerprint to the probability of particular events or series of events," said Christopher Field, co-chairman of a U.N. report due in 2014 about the impacts of climate change.

But until recently they have said that naturally very hot, wet, cold, dry or windy weather might explain any single extreme event, like the current drought in the United States or a rare melt of ice in Greenland in July.

But for some extremes, that is now changing.

A study this month, for instance, showed that greenhouse gas emissions had raised the chances of the severe heatwave in Texas in 2011 and unusual heat in Britain in late 2011. Other studies of extremes are under way.

Growing evidence that the dice are loaded towards ever more severe local weather may make it easier for experts to explain global warming to the public, pin down costs and guide investments in everything from roads to flood defenses.

"We can't (work out current costs) without being able to make the link to extreme weather," he said. "And once you've worked out how much it costs that raises the question of who is going to pay."

Industrialized nations agree they should take the lead in cutting emissions since they have burnt fossil fuels, which release greenhouse gases, since the Industrial Revolution. But they oppose the idea of liability for damage.

Almost 200 nations have agreed to work out a new deal by the end of 2015 to combat climate change, after repeated setbacks. China, the United States and India are now the top national emitters of greenhouse gases.

Field, Professor of Biology and Environmental Earth System Science at the University of Stanford, said that the goal was to carry out studies of extreme weather events almost immediately after they happen, helping expose the risks.

"Everybody who needs to make decisions about the future - things like building codes, infrastructure planning, insurance - can take advantage of the fact that the risks are changing but we have a lot of influence over what those risks are."

Another report last year indicated that floods 12 years ago in Britain - among the countries most easily studied because of it has long records - were made more likely by warming. And climate shifts also reduced the risks of flooding in 2001.

Previously, the European heatwave of 2003 that killed perhaps 70,000 people was the only extreme where scientists had discerned a human fingerprint. In 2004, they said that global warming had at least doubled the risks of such unusual heat.

The new statistical reviews are difficult because they have to tease out the impact of greenhouse gases from natural variations, such as periodic El Nino warmings of the Pacific, sun-dimming volcanic dust or shifts in the sun's output.

So far, extreme heat is the easiest to link to global warming after a research initiative led by the U.S. National Oceanic and Atmospheric Administration and the British Meteorological Office.

"Heatwaves are easier to attribute than heavy rainfall, and drought is very difficult given evidence for large droughts in the past," said Gabriele Hegerl of the University of Edinburgh.

Scientists often liken climate change to loading dice to get more sixes, or a baseball player on steroids who hits more home runs. That is now going to the local from the global scale.

Field said climate science would always include doubt since weather is chaotic. It is not as certain as physics, where scientists could this month express 99.999 percent certainty they had detected the Higgs boson elementary particle.

"This new attribution science is showing the power of our understanding, but it also illustrates where the limits are," he said.

A report by Field's U.N. group last year showed that more weather extremes that can be linked to greenhouse warming, such as the number of high temperature extremes and the fact that the rising fraction of rainfall falls in downpours.

But scientists warn against going too far in blaming climate change for extreme events.

Unprecedented floods in Thailand last year, for instance, that caused $45 billion in damage according to a World Bank estimate, were caused by people hemming in rivers and raising water levels rather than by climate change, a study showed.

"We have to be a bit cautious about blaming it all on climate change," Peter Stott, head of climate monitoring and attribution at the Met Office's Hadley Centre, said of extremes in 2012.

Taken together, many extremes are a sign of overall change.

"If you look all over the world, we have a great disastrous drought in North America ... you have the same situation in the Mediterranean... If you look at all the extremes together you can say that these are indicators of global warming," said Friedrich-Wilhelm Gerstengabe, a professor at the Potsdam Institute for Climate Impact Research.