In addition to activity at Mt Tongariro

Geothermal activity seen in New Zealand
A long forgotten geothermal spectacle on New Zealand's North Island could be coming back to life after more than 40 years, scientists said. 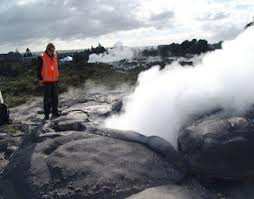 In the first half of the 20th century the Waikite Geyser in the Whakarewarewa geothermal area near Rotorua was known for its spectacular hot water eruptions reaching up to 65 feet but had not produced a significant eruption since 1969, the Institute of Geological and Nuclear Sciences said.

However, in the past year scientists have increasingly noticed geothermal waters coming into the throat of the geyser, a major tourist attraction, the official Chinese news agency Xinhua reported.

Geothermal features like geysers can be naturally variable and stay dormant for years, GNS geothermal scientist Ed Mroczek said in a statement.

"This makes it difficult to distinguish what is part of a natural cycle and what is disruption caused by human activity," he said.

Scientists say they believe a sharp increase in the number of bores drilled in Rotorua since the 1950s by homeowners and businesses seeking cheap energy caused underground pressures to drop.

But new research at Whakarewarewa suggests pressure has increased and water from deeper in the earth was being pushed toward the surface, scientists said.

"We have no way of knowing if Waikite will recover to its former magnificence, but the signs we are seeing are very encouraging," Mroczek said.