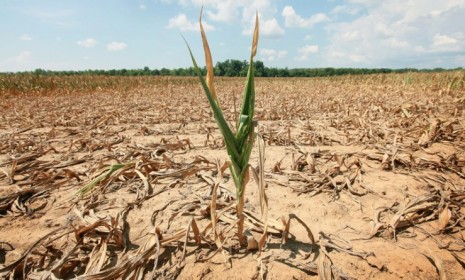 More than 95 percent of Illinois is in a severe drought or worse, according to a national report Thursday that increased concerns about how the hot, dry summer is affecting farming.

Most of Cook County is in a moderate drought, and other parts of the Chicago area are suffering through severe drought. But the central and southern portions of Illinois are experiencing even worse conditions that are classified as extreme or exceptional, according to the National Drought Mitigation Center.

Surrounding states, especially Missouri and Indiana, have also been hit hard, with 55.5 percent of the Midwest experiencing at least a severe drought, compared with 45.6 percent of the country.

The drought center's new report doesn't take into account the bit of rain the Chicago area received this week — about 0.55 inch fell at O'Hare International Airport on Tuesday and Wednesday — but it would take 3 inches or more to have made any significant improvement, said drought center climatologist Brian Fuchs.

"In a lot of places in Illinois, this is the worst they remember," said Emerson Nafziger, a professor of crop sciences at the University of Illinois.

About 66 percent of the state's corn crop is in poor to very poor condition, according to a report his week from the Illinois Department of Agriculture. In states that are major producers of corn nationwide, about 45 percent of the corn is poor or worse, though the total produced this year won't be known until after September, when harvesting begins, according to the U.S. Department of Agriculture. During the same time last year, only 14 percent of corn crops nationwide were considered poor.

"We're sitting here, watching the sky; it looks like it could rain," Nafziger said in by telephone from near Vandalia. "People are kind of pessimistic."

Nationally, almost 40 percent of agricultural land is experiencing at least a severe drought, which makes the 2012 drought more extensive than any other since the 1950s, according to the USDA.

Illinois Climatologist Jim Angel said July's heat and lack of rain could make this drought its worst on record, especially because all across the state, farmers' soil is showing signs of having very little moisture, something essential for plant health.

"In a normal season we rely on soil moisture to get you through August, but we don't have that," Angel said.

Less corn production usually means higher food prices, according to the USDA, though the full effect of a sparse corn harvest wouldn't move through to grocery stores until at least 10 months from now. But grocery shoppers could see the price of chicken or eggs and other meats increase sooner than that, since farmers often scale back on their livestock when the cost of corn feed is high, which can happen when corn production is low, Nafziger said.

Still, some say there's room for optimism. Angel said long-term forecasts show an increased chance of above-normal precipitation and more normal temperatures over the next two weeks. The heat and dry weather looks to be shifting to the west, maybe making the Midwest a little wetter and milder, Angel said.

"That's good news if it pans out," Angel said.

Report shows U.S. drought rapidly intensifying
The widest drought to grip the United States in decades is getting worse with no signs of abating, a new report warned Thursday, as state officials urged conservation and more ranchers considered selling cattle. 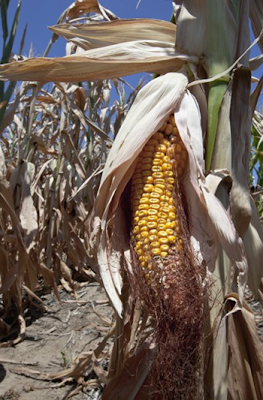 The drought covering two-thirds of the continental U.S. had been considered relatively shallow, the product of months without rain, rather than years. But Thursday's report showed its intensity is rapidly increasing, with 20 percent of the nation now in the two worst stages of drought — up 7 percent from last week.

The U.S. Drought Monitor classifies drought in various stages, from moderate to severe, extreme and, ultimately, exceptional. Five states — Colorado, Iowa, Kansas, Missouri and Nebraska — are blanketed by a drought that is severe or worse. States like Arkansas and Oklahoma are nearly as bad, with most areas covered in a severe drought and large portions in extreme or exceptional drought.

Other states are seeing conditions rapidly worsen. Illinois — a key producer of corn and soybeans — saw its percentage of land in extreme or exceptional drought balloon from just 8 percent last week to roughly 71 percent as of Thursday, the Drought Monitor reported.

And conditions are not expected to get better, with little rain and more intense heat forecast for the rest of the summer.

"Some of these areas that are picking up a shower here and there, but it's not really improving anything because the heat has been so persistent in recent weeks, the damage already is done," said Brian Fuchs, a climatologist at the National Drought Mitigation Center at the University of Nebraska in Lincoln. "Realistically, the forecast going forward is a continuation of warm, dry conditions through the end of August easily, and we may see them in the fall."

Some are reacting to the drought with inventiveness. At Lake DePue in Illinois, the dangerously low water level threatened to doom an annual boat race that's a big fundraiser for the community. Hundreds of volunteers joined forces and built a makeshift dam out of sandbags before hundreds of millions of gallons of water were pumped in from a river. By Wednesday, the effort had added 2 feet to the water level, doubling the lake's size and saving the race.

In other areas, communities are instituting water restrictions and asking people to voluntarily conserve.

The drought stretches from Ohio west to California and runs from Texas north to the Dakotas. Only in the 1930s and the 1950s has a drought covered more of the U.S., according to National Climatic Data Center in Asheville, N.C.

Rain-starved Oklahoma could get a brief respite with perhaps a quarter of an inch possible through sunrise Friday, the National Weather Service said.

But that won't be of much help to people like Clinton rancher Paul Schilberg, who would sell his herd of Black Angus cattle if he didn't stand to lose maybe $2,500 per head for the animals he usually buys for more than $3,000. With the grass and forage dead from lack of rain, he's been forced to buy hay.

"I'm feeding just like I would during the winter time," he said.

Nationwide, ranchers have been selling off large numbers of animals they can't graze and can't afford to buy feed for. The nation's cattle inventory, at 97.8 million head, is the smallest since the U.S. Department of Agriculture began a July count in 1973.

"Eastern Iowa is in worst shape than we are," he said. "Right around here, we're still at the tipping point, but conditions have improved somewhat, even though last night's rain wasn't widespread."

Kansas Gov. Sam Brownback declared a drought emergency in all of the state's 105 counties this week and urged residents to conserve as much water as possible as the drought becomes more intense. The latest Drought Monitor report, which covers conditions through Tuesday, lists 73 percent of Kansas in an extreme drought, up 9 percent from a week earlier.

"Even today, the lake elevations are good, all things considered," Streeter said.
He said ranchers can take 4,000 to 5,000 gallons of water at a time on semi-trucks loaded with tanks, but that's not a permanent solution. "Folks can't do that long term because of the cost of hauling the water. If they are buying feed, too, they may just have to sell the cattle."
Posted by seemorerocks at 12:09