Negative Interest Rates Becoming More Prevalent – Here’s Why You Should Be Concerned
The once unthinkable might become policy: negative nominal interest rates.Investors should care as they may be increasingly punished for not taking risks yet masochistic investors believe they may be the prudent ones given the risks lurking in the markets. What are investors to do, and what are the implications for the U.S. dollar and currencies? Words:

So says Axel Merk (www.merkfunds.com) in edited excerpts from his original article*. 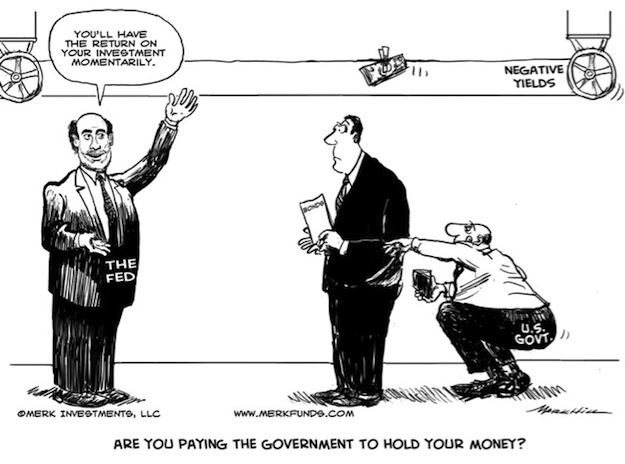 When investors deposit money in a bank, they are giving the bank a loan. Some investors aren’t so sure whether zero or close to zero percent interest compensates them for the risk of lending money to the bank, although FDIC insurance where applicable may alleviate that concern.
Negative Yields Abound

Nevertheless, there are plenty of deposits that are not FDIC insured, such as money market funds which must invest in risky assets to cover their expenses and pay any yield and, as such, are investing in U.S. dollar denominated commercial paper issued by European banks….This flight to “safety” is taking on pandemic proportions -[and now government bills are being offered at negative interest rates by the following European countries:]
In the U.S., inflation protected securities (TIPS) have sold with negative yields at auction for some time:
What is noteworthy about these is that the negative yields were auction results. In the secondary market, Treasury securities have flirted with negative yields periodically throughout the crisis:

Negative yields late last year were, in our assessment, directly linked to the flight of U.S. money market funds out of European commercial paper, causing funding strains for such European financial institutions. The world’s policy makers were alarmed as European banks in turn have been the primary players in providing U.S. dollar denominated funding to emerging markets.

Confused? It’s an illustration of the “contagion,” how a crisis in Europe can affect the globe. Always eager to lend a friendly hand, the Federal Reserve opted to open a “swap line,” making cheap U.S. dollars available to central banks around the world, most notably the European Central Bank:

The negative yields on U.S. Treasuries dissipated once the Federal Reserve provided the loans to the ECB (there was one dissent at the time at the Fed, arguing that such swap lines are fiscal, not monetary policy and ought to be authorized by Congress).

Where Should One Hold Their Cash?