Syria - the role of al-Qaeda

Al-Qaeda gaining experience in Syria, eyes 'Islamic state to fight Israel and Iran'
An Iraqi Al-Qaeda operative has admitted that his organization is taking part in the Syrian uprising against President Assad. The revelation comes amidst increasing evidence that Al-Qaeda is gaining a foothold in Syria. 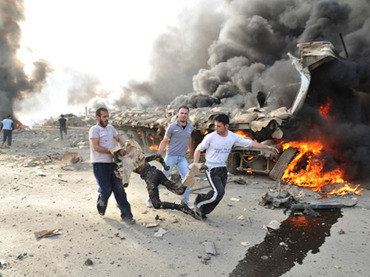 “We have experience now fighting the Americans, and more experience now with the Syrian revolution,” he noted. “Our big hope is to form a Syrian-Iraqi Islamic state for all Muslims, and then announce our war against Iran and Israel, and free Palestine.”

In Iraq, the number of Al-Qaeda attacks has been on the rise, with over 400 people killed since the start of June. On Monday, a series of bombings and shootings took the lives of over 110 people, an attack that has been claimed by the self-proclaimed Islamic State of Iraq, Al-Qaeda’s front in the country. As for Syria, Iraqi officials have pointed to the fact that both governments face a common enemy: Al-Qaeda.

“We are 100-per-cent sure from security coordination with Syrian authorities that the wanted names that we have are the same wanted names that the Syrian authorities have, especially within the last three months,” Izzat al-Shahbandar, a close aide to the Iraqi prime minister, said. “The Al-Qaeda that is operating in Iraq is the same as that which is operating in Syria.”

Iraqi foreign minister Hoshyar Zebari also noted that while in the past decade his country suffered from an influx of Al-Qaeda operatives coming in from Syria, the direction of their flow has now reversed.

“We have solid information and intelligence that members of Al-Qaeda's terrorist network have gone to Syria,” he told reporters in Baghdad on July 5. “Our main concern, to be honest with you, is about the spill over – about extremist, terrorist groups taking root in neighboring countries.”

Another piece of evidence pointing to Al-Qaeda’s growing presence in Syria is the increasing number of Al-Qaeda-style suicide bombings, most of them targeting government facilities.

Last week, at least four senior government ministers were killed in an explosion in Damascus, as fighting between troops and rebels raged on in the outskirts of the city. Both the Free Syrian Army and the Islamist Liva al-Islam claimed responsibility for the bombing.

Last month, seven people were killed and 11 were kidnapped in an attack on the state-run Al-Ikhbariya TV station. The Al-Qaeda-linked Al-Nusra Front for the People of the Levant claimed responsibility for the attack.

In May, two car bombs detonated by suicide bombers went off next to a military intelligence complex in Damascus, killing at least 55 soldiers.

All in all, at least 35 car bombings and 10 suicide bombings have taken place in Syria this year, data compiled by the Institute for the Study of War shows. Four of these attacks were claimed by the Al-Nusra Front. Many more were alleged to have been perpetrated by the Islamist group, as well as other militant Sunni organizations connected to Al-Qaeda: the Abdullah Azzam Shaheed Brigades and the al-Baraa ibn Malik Martyrdom Brigade.

Al-Qaeda has repeatedly been voicing its support for the Syrian uprising against President Bashar al-Assad. Last week, Abu Bakr al-Baghdadi, the pseudonymous new leader of Al-Qaeda’s branch in Iraq, issued his first audio statement in which he devoted 30 minutes to praising the Sunni struggle against President Assad, a member of the offshoot Shiite Alawite sect. The statement also served as a harbinger for the deadly Monday attacks in Iraq.

“I bring you good news: we are starting a new phase in our struggle with a plan we named `Breaking the walls,' and we remind you of your priority to free the Muslim prisoners,” he said. “At the top of your priorities regarding targets is to chase and liquidate the judges, the investigators and the guards.”

Al-Qaeda leader Ayman Al-Zawahari has also been voicing his support for the Syrian uprising against President Bashar al-Assad. In February he released an audio recording lauding the rebels and calling them “the lions of the Levant.”
Nevertheless, the Syrian National Council (SNC), the Free Syrian Army (FSA) and the Syrian Revolution General Commission (SRGC) "are all united in rejecting the message of Al-Qaeda,” a February statement of the SNC read.

The Syrian government has maintained that it has been fighting terrorists since last year. This claim has repeatedly been shunned by a number of high-ranking Western officials. US State Department spokesperson Victoria Nuland said the recent attacks against senior government officials in Damascus were “not surprising.”

Her position, as well as that of Susan Rice, the US ambassador in the UN, led Russian foreign minister Sergey Lavrov to condemn America’s stance and suggest that it was directly endorsing terrorism.

The anti-Assad rhetoric of top American officials is not being backed by evidence presented by the country’s own military and intelligence.

In February, US director of national intelligence James Clapper told Congress that a series of bombings against Syrian security targets last year bore “all the earmarks of an Al-Qaeda-like attack.”

General Martin Dempsey, the chairman of the Joint Chief of Staff, also suggested that Islamist militant organizations such as Al-Qaeda were trying to stir the conflict in Syria their way.

“Those who would like to foment a Sunni-Shia standoff – and you know who they are – are all weighing in in Syria,” he noted during a Senate testimony in February.
Posted by seemorerocks at 11:50