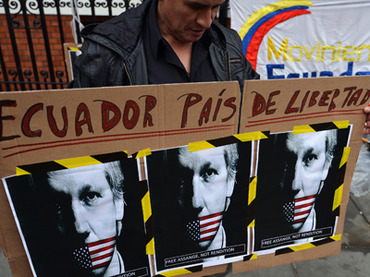 “We will make a decision that doesn't affect our relationship with Great Britain,” Patino noted. “It might be a decision that's different from the position of the government of Great Britain, but we will be prudent so as not to affect the situation over there right now.”
Patino said his country would invite British and Swedish officials to come over to Ecuador to discuss the issue. The Wikileaks founder is currently staying at Ecuador’s embassy in London and celebrated his 41st birthday on July 3.
Julian Assange took refuge in the embassy on June 19. He had previously spent 18 months under house arrest trying to appeal a court ruling to extradite him to Sweden, where he is wanted for questioning on suspicion of sexual misconduct.
Assange believes that he may subsequently be re-extradited to the United States to face charges of espionage, as Wikileaks published thousands of classified documents.

On Tuesday, Wikileaks announced it had hired Spanish former judge Balthazar Garzon to lead a legal team defending the whistleblower website and Assange.