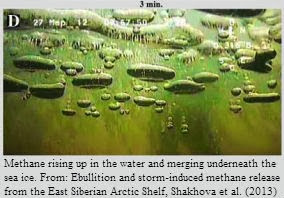 
A stormier Arctic could fast-track the greenhouse gas into the atmosphere, potentially accelerating global warming.

"Significant quantities of methane are escaping the East Siberian Shelf as a result of the degradation of submarine permafrost," says Natalia Shakhova of the University of Alaska in Fairbanks. She and her team collected data – at a great cost – to show that vast areas are releasing plumes of methane gas, which is escaping into the atmosphere.

In August 2010, 11 sailors aboard a tug boat drowned in the Laptev Sea while trying to rescue a fishing boat in the Arctic waters north of Siberia. What didn't emerge at the time was that they were attempting to rescue a team of Russian researchers probing whether storms that stir up the ocean will increase the release of methane from the sea bed as the Arctic warms.

From their fishing boat, the researchers drilled into the bed of the Laptev Sea – a hotspot of methane emissions – and used sonar to analyse gas bubbles in the water. They found the permafrost that usually sat beneath the sea bed was unfrozen, allowing around 500 tonnes of methane to bubble out of every square kilometre of the sea bed each day. Bubbling seeps of methane were found along the entire coastline of their survey area, over the East Siberian Arctic Shelf. Similar plumes have been seen off the coast of Svalbard in Norway.

The team also measured how two storms – one in 2009 and one in 2010 – changed the amount of methane dissolved in the water. They found that the winds stirred up the ocean, speeding the release of gases into the air.


"We have proven that the current state of subsea permafrost is incomparably closer to the thaw point than terrestrial permafrost, and that modern warming does contribute to warming the subsea permafrost," says Shakhova. Increasing storminess in the Arctic, predicted by some climate models, would speed up the release of methane, she says.

The findings, obtained as part of the International Siberian Shelf Study Program, add weight to fears that a massive "pulse" of up to 50 billion tonnes of methane from the Arctic could warm the world by a degree or more. A controversial claim earlier this year that it could cost the global economy $60 trillion was based on earlier findings from Shakhova's team (Nature, vol 499, p 401).

But the findings don't show that a major pulse is under way. "The total volume of methane being released is still small," said Laurence Smith of the University of California, Los Angeles. "But this research provides valuable new understanding of the processes of methane bubbling during storms, conducted at great personal risk."

During the second storm that the researchers monitored, the winds became so violent that they called for help. The rescue tug sank before reaching them. The researchers survived unharmed, and dedicate their paper "to the memory of the crew of Russian vessel RV Alexei Kulakovsky".