Oil protest flotilla heading home as Greenpeace goes to court
Greenpeace says its seven-strong flotilla of boats will end its protest off the Raglan coast later this afternoon, as it prepares a High Court case against Anadarko. 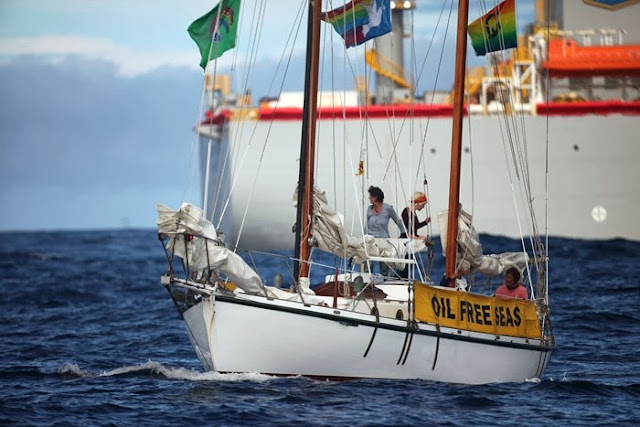 Activists say the protest has been a success, despite the US oil company beginning exploratory drilling early this morning.

"We’re heading home determined to carry on this campaign for a cleaner, more prosperous New Zealand," says Bunny McDiarmid. "We’re really happy to have had the support of thousands and thousands of Kiwis who don’t want risky deep sea drilling.”

The flotilla, which has been in the area for more than a week, will depart later this afternoon.

The protest boat Vega had been sitting within the 500m exclusion zone where the Noble Bob Douglas began drilling.

Greenpeace filed papers at the High Court in Wellington today asking for a judicial review, claiming the Environmental Protection Agency (EPA) made an "error in law" by allowing US oil company Anadarko to begin drilling without looking at several key documents.

These include reports on oil spill modelling and emergency plans to deal with an oil spill.

Greenpeace lawyers have asked for an urgent hearing given the issue is of "national importance".

Chief policy advisor Nathan Argent believes the Government's process "has a hole in it so big that an untested 230 metre-long drilling ship has been driven through it".

If the legal challenge is successful, it could stop the company's drilling plans because certain requirements of the law were not met, the organisation believes.

Greenpeace, Government ministers and the EPA haven't seen the documents and do not know what's in them, Mr Argent maintains.

"This not only looks shockingly lax, and a complete contrast from Government claims that oil companies have been put through the wringer, it also now looks like this was not lawful."

Meanwhile the Green Party says Anadarko should cease drilling until the review is completed.