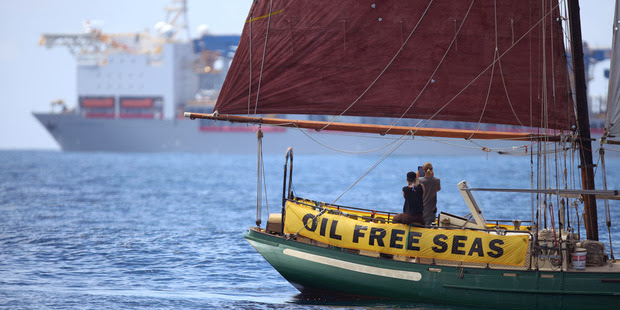 "It's a process that's known in the industry as 'spudding' - it's the first step in the actual drilling protest - getting things set up on the sea floor and beginning the well."

It was estimated to take 70 days to drill down to Anadarko's target depth of 4600 metres, including a water depth of 1500 metres, Mr Seay said.

The Greenpeace sailing vessel Vega, one of six boats from the Oil Free Seas protest flotilla, had remained within the 500m safety zone in protest against the drilling, he said.

However, the Vega had not disrupted the drilling process, Mr Seay said.

"We've had to keep an extra eye out for them which we'd rather not have to do and whenever you've got somebody in close proximity in a safety zone, the safety risks are heightened, so we've had to take extra precautions to mitigate that."

Anadarko had not asked government authorities for any assistance to remove the protest vessels, however they had informed them of their presence, he said.

"We've notified the authorities, we did that last week, of the fact that the Vega's been inside that safety zone, but we're not seeking any particular intervention as such, that's always a call for them to make and so far they've seen fit to not actually go out there."

After finishing drilling in the deep-water Taranaki basin, the Noble Bob Douglas would move down to the Canterbury basin, off the Otago coast to drill there early next year, Mr Seay said.

Prime Minister John Key told 3 News this morning that it was not up to the Government to disrupt the Oil Free Seas protest flotilla.

"It's the police actually and Maritime New Zealand that have responsibility for whatever actions they may or may not take.

"Our concerns are just simply that in this case, this company Anadarko can carry out the work that they've been legally granted authority to do so by the Government.

"At the end of the day, those protesters have a legal right to be there, providing they abide by the law.

"One of those vessels is not abiding by the law and that'll be a matter for the police to decide whether they take action."

Mr Key described last weekend's 'banners on the beach' protest against the exploratory drilling as "rent-a-crowd".

Piha hosted more than 1000 people last weekend to listen to speeches and watch a haka. Around 400 people joined the protest at Muriwai, 500 at Bethells Beach, and almost 750 at Raglan.

"There was a few hundred people wandering around," Mr Key said.

"It's just Greenpeace ringing up its members and getting them to come along, the Green Party had a few [people] there, fair enough, it's not tens and tens of thousands of people.

"Most New Zealanders were going about their business actually enjoying some of the things that the Government provides like roading and the likes."

The Green Party made up the protest numbers and "put the worst possible spin they can on everything", Mr Key said.

Prime Minister John Key has labelled Kiwis who took to the beaches on the weekend to protest against oil drilling a Greenpeace "rent-a-crowd".

US oil company Anadarko began exploratory drilling off the coast of Raglan overnight, ignoring protest boat the Vega, inside the 500m exclusion zone and getting closer.

Vega co-skipper Jeanette Fitzsimons says they're now only 100m from the Noble Bob Douglas, which began drilling at 2:30am.

Anadarko NZ manager Alan Seay says the Vega's presence is a "nuisance", but won't stop them getting on with the job.

"It's always a concern if you've got somebody in close proximity, and you know, the Vega's been there pretty much since this all started a week or so ago. It requires us to keep an extra lookout for them as a way of mitigating that risk, but there's no direct interference with our work, so we're carrying on in complete safety.

"I liken it to somebody wandering onto a construction site – you don't want them there, it raises the safety stakes, but there's no direct interference and no reason to actually stop work."

Mr Key says police are aware of the situation, and it will be their call whether to intervene or not.

"At the end of the day those protesters have a legal right to be there, providing they abide by the law," he said on Firstline this morning. "One of those vessels is not abiding by the law, and that'll be a matter for police to decide whether they'll take action."

Mr Key says any police operation would involve Maritime New Zealand, who have the ability to call on the Navy for assistance.

Meanwhile, Greenpeace has today filed papers in the High Court at Wellington seeking a judicial review to stop Anadarko.

It says the Environmental Protection Agency was remiss in allowing the drilling to proceed without looking at several "key documents".

On the weekend several thousand New Zealanders protested against Anadarko's exploratory drilling, which will be the deepest well ever drilled in New Zealand. Ms Fitzsimons said there were between 7000 and 10,000 people at demonstrations, held across the country.

But Mr Key says he was "quite surprised" the protests were so "modest". When Firstline host Simon Shepherd suggested while each individual protest may have been small, but together they added up to thousands, Mr Key replied "yeah, whatever", and said they were a "rent-a-crowd".

"It's just Greenpeace ringing up its members and get them to come along, and the Green Party had a few people there, I mean okay, fair enough. But you know, it's not tens and tens of thousands of people.

"Most New Zealanders were going about their business, actually enjoying some of the things that the Government provides, like roading."

Ms Fitzsimons, a former co-leader of the Green Party, said calling protesters a "rent-a-crowd" was a "standard response" of politicians.

"If you think that Greenpeace can ring that many people in a few days and get them to come to the beach, then you're rather overestimating their capacity on the phone," she says. "This is a spontaneous outpouring of concern by New Zealanders, and it's going to go on."

"They just add in the worst case scenario of absolutely everything to try and frighten people."

Mr Seay says the final depth of the well will be around 4600m, and they're expecting it to take 70 days to find out if it's going to be worth setting up a permanent well in the area.

"You don't know what's down there until you've done the drilling."

The protesters say they have enough supplies for two weeks, and won't be leaving the area.

Greenpeace sees no sign of
drilling as Anadarko says it begins