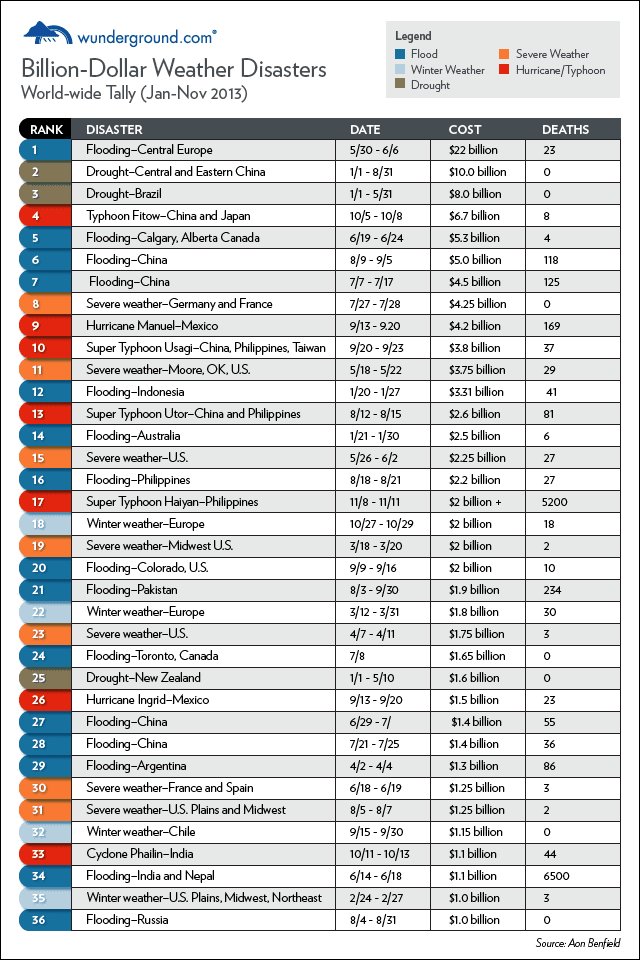 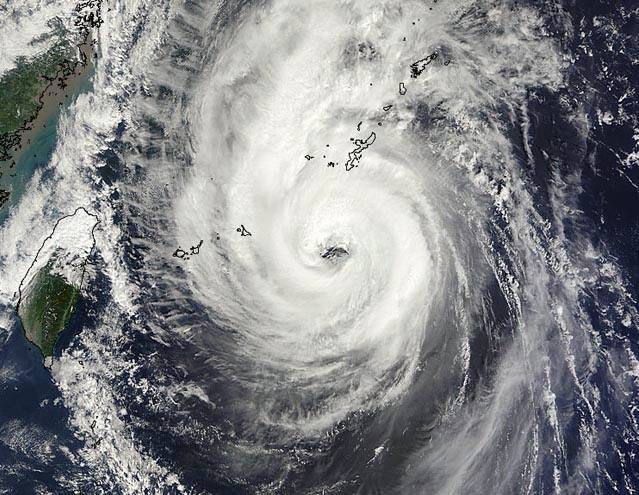 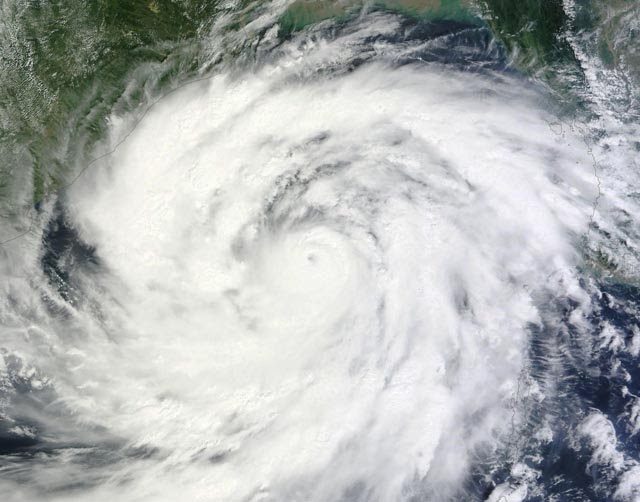 Disaster 2. Tropical Cyclone Phailin hit the northeast coast of India on October 12, 2013 as a weakening Category 4 storm with 140 mph winds. Due to strong preparedness efforts by India, the storm killed only 44 people, in a location where 10,000 people had been killed by a similar-strength cyclone in 1999. Damage from Phailin was estimated at $1.1 billion, which would make it the 6th most expensive tropical cyclone in India's history (adjusted for inflation.) In this image taken at approximately 04:30 UTC on October 11, 2013, Phailin fills the Bay of Bengal as a top-end Category 4 storm with winds of 155 mph. Image credit: NASA. 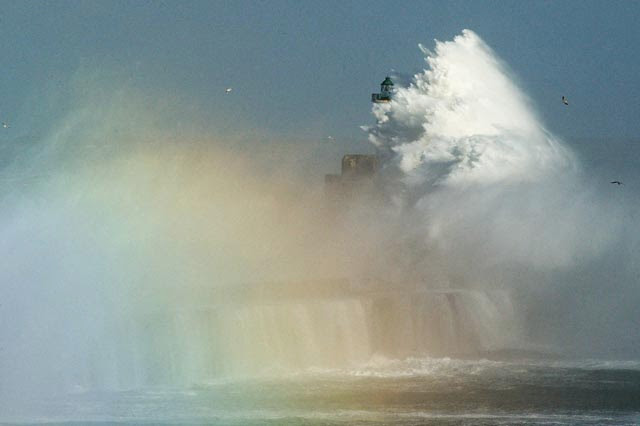 Disaster 3. Extratropical storm "Christian" hit the United Kingdom, France, Belgium, the Netherlands, and Scandinavia on October 28, killing 18 and causing at least $2 billion in damage. A new all-time wind speed record in Denmark of 192.6 kph (120 mph) was measured that day at Kegnæs on the Baltic Sea, close to the German border. In this image, large waves break against the dyke at the entrance of the port of Boulogne, northern France, on October 28, 2013. Image credit: PHILIPPE HUGUEN/AFP/Getty Images)

For the 19th month in row, October 2013 featured neutral El Niño conditions in the equatorial Eastern Pacific. NOAA's Climate Prediction Center (CPC) expects neutral El Niño conditions to last into the Northern Hemisphere spring of 2014, as do the large majority of the El Niño models. Temperatures in the equatorial Eastern Pacific need to be 0.5°C below average or cooler for three consecutive months for a La Niña episode to be declared; sea surface temperatures were 0.0°C from average as of November 18, and have been +0.1 to -0.4°C from average since April 1, 2013.

Arctic sea ice extent during October was 6th lowest in the 35-year satellite record, and had the largest October extent since 2008, according to the National Snow and Ice Data Center (NSIDC).

A potent winter storm (Boreas) is bringing snow and difficult travel conditions to Arizona, and will spread a variety of dangerous winter weather across Texas, New Mexico, Oklahoma, Kansas, Colorado, and Utah over the weekend. On Monday and Tuesday, the storm will dump heavy rains over the Southeast U.S., before emerging over the coastal waters of the Mid-Atlantic on Wednesday morning. The models are in fair agreement that Boreas will then intensify into the season's first significant Nor'easter on Wednesday afternoon, bringing heavy rain to coastal New England and the Mid-Atlantic, snow farther inland at higher elevations, and minor coastal flooding due to strong winds. The potential for 6+ inches of snow in Upstate New York and the northern portions of New Hampshire, Vermont, and Maine looks good, and there is the possibility that Washington D.C. and Philadelphia could get 2 - 4" of snow Wednesday afternoon and evening, after a period of heavy rain. With the storm still five days away, confidence in the timing of the storm and the potential location and amount of snow is low, and we will have to see how the models evolve in their handling of this potential Thanksgiving Eve Nor'easter. 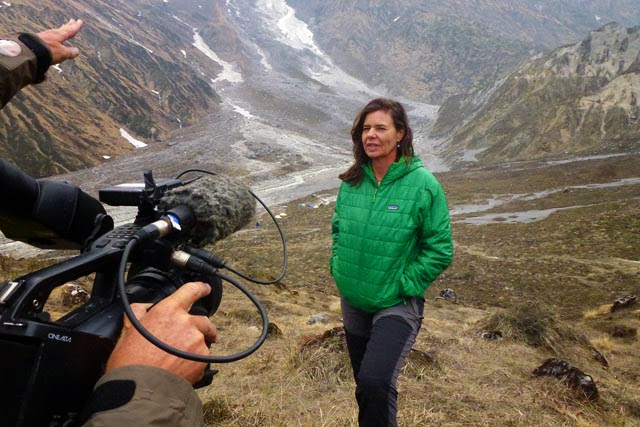 “Tipping Points”, the landmark 6-part climate change TV series that began airing in October on The Weather Channel, airs for the final time on Saturday night, November 23, at 9 pm EDT. The new episode, "India Water Crisis", goes to the top of the world--the Himalayas--and all the way down across the plains of India, following one of the most famous river systems in the world--the Ganges. Fresh water sources from the Himalayas that provide water to over one billion people are under threat, but just what is happening here--and if the region is approaching a tipping point--are what polar explorer and climate journalist Bernice Notenboom seeks to find out.

For those of you more into watching a show about a preposterous imaginary weather threat instead of a worrisome real one, SyFy Channel's "Stonados" is airing at the same time as "Tipping Points." That's right--a killer tornado hurls giant stones that "explode like bombs" in Boston. "Stonados" was originally set to air before the equally ridiculous "Sharknado" movie. However, the Boston Marathon bombings occurred the week before, and the producers wisely pulled "Stonado" in favor of "Sharknado." One can imagine all sorts of possible sequels--Lobsterbado! Spidernado! Snakenado! After watching the "Stonado" trailer, my wife asked me, "why are the rocks exploding? What's the science behind that?" I told her that you don't have to have any science in a movie made by Asylum studios, you just make things explode.

Have a great weekend everyone!