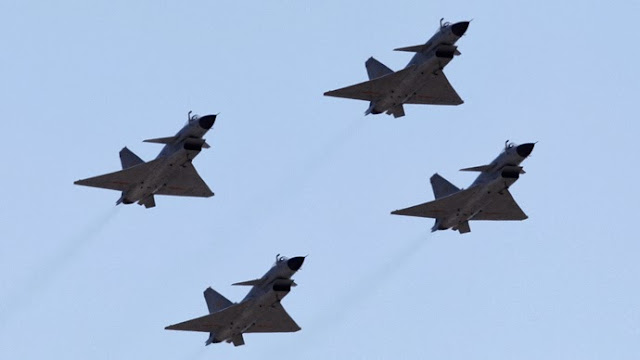 Two US surveillance aircraft and 10 Japanese F-15 jets were ‘tailed’ by Chinese pilots on Friday.
China ordered an urgent dispatch of its Su-30 and J-10 fighter jets to an area in the East China Sea after the foreign aircraft “invaded” the air defense zone, they said.
The reported intrusions came in defiance of the East China Sea Air Defense Identification Zone (ADIZ), established by Beijing last week.
China’s move has triggered outrage from several states in the region and critical rhetoric from the US, as the vast zone covers disputed areas, including the islets claimed by both China and Japan.
Earlier on Thursday, the Chinese Air Force conducted its first air patrol flights over the zone, as Japan and South Korea sent their own military aircraft into the zone's airspace in an act of defiance.
China has stressed its decision to enforce the airspace identification zone - which requires all aircraft flying over or near it to identify themselves - follows common international practices and “is a necessary measure in China’s exercise of self-defense rights.”
No international flights will be affected by the setup of the zone, Chinese Air Force spokesman, Shen Jinke, told Xinhua.
Japan and its US ally blasted the decision as “unacceptable” and rejected the “unilateral” declaration, saying it would create dangerous tension. However, Chinese officials gave a reminder that both countries have long had their own ADIZ, and that the Japanese never discussed theirs with their neighbor.
“If they want it revoked, then we would ask that Japan first revoke its own air defense identification zone and China will reconsider it after 44 years,” China’s Defense Ministry spokesman, Yang Yujun, said in a statement posted on the ministry’s website on Thursday.
While possible action against the zone’s infiltrators has been vaguely defined as “defensive emergency measures,” The Global Times, a Chinese state media newspaper, on Friday called for “timely countermeasures without hesitation,” should Tokyo violate the new ADIZ.
At the same time, the paper suggested China could ignore violations by some other states, including the US. Two US military B-52 bombers flew over the area on Monday without prior notice, with a Pentagon spokesman telling Reuters we “have continued to follow our normal procedures.”


China's escalation and re-escalation described in detail yesterday, has just been met with a corresponding re-re-escalation by Japan.
China's Ministry of Defense reports that the nation identified Japanese military planes that entered into Chinese air defense identification zone today.

China has also identified 2 batches of 2 U.S. surveillance planes consisting of P-3 and EP-3, without specifying whether the planes entered into the zone

China scrambled Su-30, J-11 and other aircraft in response.
And now it's China's turn to, once again, respond. And then Japan and the US again, and so on, until someone gets hurt.