Who Is Responsible for Climate Change? New Study Identifies the Top 90 Producers of Industrial Carbon Emissions


The responsibilities for climate change fall on many shoulders, of course — from individuals through the daily choices we make, to emitting industries, to nations. But some are more responsible than others. Drawing upon several years of painstaking research, Heede shows that nearly two-thirds, 63 percent, of all industrial carbon dioxide and methane released to the atmosphere can be traced to fossil fuel and cement production by just 90 entities — investor-owned companies, such as Chevron and Exxon-Mobil; primarily state-run companies, such as Gazprom and Saudi Aramco; and solely government-run industries, such as in the former Soviet Union and China (for its coal production).

The top 20 entities, shown here, produced 48 percent of all industrial carbon pollution, with 15 percent produced by another 70 entities. Look to the paper and to Heede’s website CarbonMajors.org for more detailed figures, methods, and the underlying data. 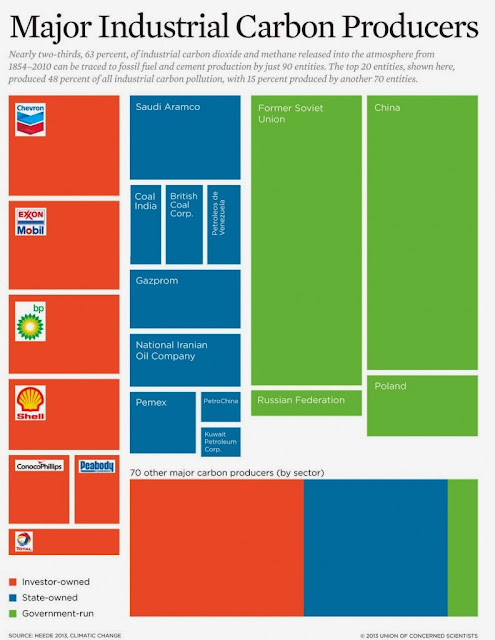 Heede, director of the Climate Accountability Institute in Snowmass, Colorado, and formerly at the Rocky Mountain Institute, is a long-standing collaborator. We’ve worked together to explore what lessons for climate accountability  might be drawn from understanding how the science of health risks from smoking informed the history of tobacco control. UCS provided funding to ensure that his Climatic Change paper is open-access, available to all readers without charge. And we’re working together with a team of top-notch climate modelers to measure how much of the rise on global average temperature and specific climate change impacts can be attributed to the emissions traced to the major industrial carbon producers Heede identifies. Our first results will be presented at next month’s annual meeting at the American Geophysical Union in San Francisco (click on “Fall Meeting Program” at this link and search for “Heede” in “Search Program”).
Public, policy, legal, and investor decisions over the attribution of responsibility for climate change can be informed but not determined by scientific data alone. What kind of dialogue, informed by these data, do we need? Here’s what Heede concludes:
“Most analyses to date, including the UNFCCC (UN Framework Convention on Climate Change) structure, consider responsibility in terms of nation-states…. However, responsibilities can also be understood in other ways as well, as done in the present analysis tracing emissions to major carbon producers. Shifting the perspective from nation-states to corporate entities—both investor-owned and state-owned companies—opens new opportunities for those entities to become part of the solution rather than passive (and profitable) bystanders to continued climate disruption…..Regulation, litigation, and shareholder actions targeted at the private entities responsible for tobacco-related diseases played a significant role in the history of tobacco control; one could imagine comparable actions aimed at the private entities involved in the production of fossil fuels, particularly insofar as some of the entities included in this analysis have played a role in efforts to impede legislation that might slow the production and sale of carbon fuels.”

Let the conversation begin. And stay tuned here for more science to inform it.