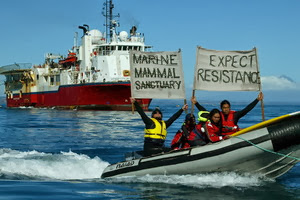 Labour energy and resources spokeswoman Moana Mackey said the papers showed the ban on protesting at sea was forged in a meeting with Shell.


"Shell provided a paper to Mr Joyce expressing concern that there was 'insufficient legal authority' to clamp down on offshore protests and that the Government 'has no teeth beyond 12 nautical miles to protect legitimate commercial activity'. Within a month work began on the changes.''

Ms Mackey said the papers showed Energy and Resources Minister Simon Bridges met with Shell again on February 14, just two weeks before he took a paper on the protest changes to Cabinet.

The paper quoted advice from Ministry of Business, Innovation and Employment officials that the oil and gas industry had sought "a more robust Government response to threats of, and actual, direct protest action''.


It also noted there had been no public consultation - which Ms Mackey said typified the Government's approach
Posted by seemorerocks at 20:53