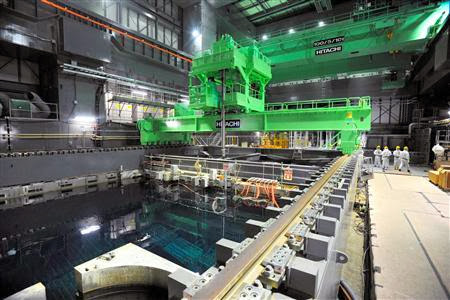 Thanks to Anne on Enenews; There were 204 new fuel assemblies in SFP #4 according to Canadian Nuclear Safety Commission, CNSC Fukushima Task Force Report, INFO-0824, October 2011, p. 6:

We just have a teensy weensy problem here... According to the inventory above, spent fuel pool #4 should have contained 204 new fuel assemblies, not just 24.

204
- 24 removed by Nov. 2013
------
180 left to go, correct? There should still be another 180 MOX plutonium fuel assemblies in the #4 spent fuel pool, if indeed this is what the videos are showing. Maybe this is Daini we are looking at, not Daichi? Maybe this is another nuclear plant somewhere else entirely?

TEPCO is claiming that ALL of the new fuel assumblies were removed from SPF#4. So what happened to the other 180 fresh fuel assemblies containing MOX plutonium fuel? Did terrorists steal them while no one was looking? Did the Japanese mafia that supplies all of the workers on site steal them and sell them on the black market? Did the military take them? Are we even talking about the same spent fuel pool, or is this just another smoke and mirrors lie conjured up by the great magicians at TEPCO in the land of nuclear OZ?

The regulatory agencies in Japan are seemingly useless and worthless. The Japanese government seems to just want to not spend any money on anything and pretend it all away, while doing little or nothing. They sure do not want to talk about reality. Meanwhile, we have 400 tons of highly radioactive water going into the ocean per day, with nothing being done about it. We also have 3 melted coriums under the ground. TEPCO says it does not know 'where' the coriums are from the three reactor melt downs.

But let's start with something simpler, like the TEPCO claims about Building #4. TEPCO claims that Fukushima Daichi Building #4 never blew up. They say that all of the damage in the video below for building #4 came through a pipe connecting building #3 with #4. They say this pipe caused a transfer of some of the explosive gases from #3 to create all of this damage.. What do you think?


Does this look like a transfer of explosive gases coming from the reactor next door? There are no photographs or videos of Building #4 exploding, but that does not mean it never happened. Obviously building #4 blew up. We just have never been provided with video of the actual event. No one can dispute that Building #4 blew up; not even TEPCO.

Our thought is that if a pipe really did transfer this much explosive force, enough to blow out concrete panels and rip them from concrete reinforcing rods, while blowing off the whole roof and bulging out the concrete walls on the loading door, and cracking the wall at the base of the building where the whole building is connected to the foundation, then the pipe itself would have split open and exploded out of the ground, BEFORE that amount of instantaneous force could have reached building #4. It would help to know what kind of pipes connect the buildings. Is this 'pipe' made of PVC, ABS, tin, galvanized sheet metal, or something else?

Here is a picture of a major crack in the based of the south wall of Fukushima reactor 4…Posted on May 20, 2012 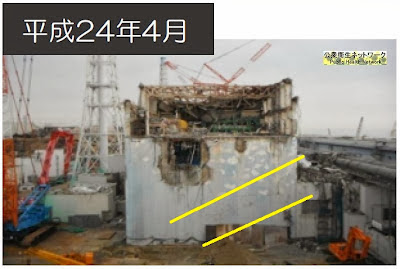 If the building #3 did not cause the #4 building to explode, then WHAT on Earth did that damage? It had to be either the reactor, which was supposedly empty, or the spent fuel pool, correct? But the problems start from there. If either one or both of them exploded like #3 did, then we have major problems with believing anything is left inside of spent fuel pool #4.

Here is a photo that provides proof that TEPCO is lying once again.. This is a satellite photo that shows Building #4 intact and will all walls still there, while the #1 and 3 Buildings are in ruins after having exploded.. You will have to hunt very long to find a photo like this, because the web has been 'scrubbed' clean of all of this kind of evidence, which does not fit the fairytales that TEPCO is telling in the land beyond OZ. 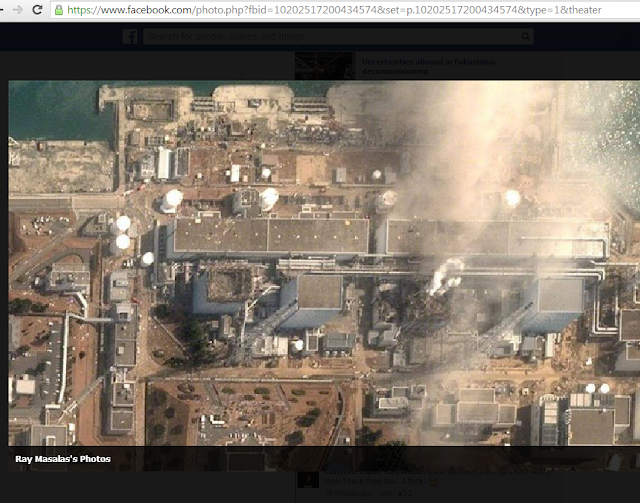 So now we get back to the truth. An explosion coming from either a spent fuel pool (#4 reactor is empty, remember) does not just leave all of the racks in place, neatly tied up with a bow. A major explosion like this would cause damage to the pool at the very least, and this is confirmed by the FOIA documents which say that the pool was 'emptied' of water due to a crack, and that all of the fuel inside melted down.

Now on to the next lie.. First, the building never really exploded. Then TEPCO claims that SFP#4 never really dried out, caught on fire, and that nothing really melted down inside of it. According to TEPCO, the building never blew up by itself, and no fires or meltdowns happened in the SFP#4. The fuel pool is still there, and all of the spent fuel is still inside of SFP#4. The tank is in good enough shape to take out and move all of the fuel inside of it, with a simple pulling arm.

Now we are a week or two into this spent fuel removal process and we have the TEPCO claim that all new fuel assemblies have been removed, when any 5th grader can see that this is an obvious lie. What will be the next lie and coverup? This story is wilder than any TV prime time drama. This story should be on the nightly news, or it should be a reality TV show, where people can vote on whether what is being shown is a lie or the truth...

Bottom line, the video at the very beginning of this article has much more possibility of being true, when we compared it to what TEPCO is claiming in their wild eyed, fairytale theories and garbage in computer models, with no actual independent third party evidence. If they can get an independent outside third party engineer team in there, headed by someone like Arnie Gunderson, and he reports that the spent fuel is all there and undamaged in spent fuel pool #4, great. If that happened, that would be something to hang a hat on.

But at this point TEPCO has lost so much credibility that one has look at everything TEPCO says, photographs or videotapes with a great deal of suspicious, distrust and outright disbelief, just because they have lied so much in the past and they continue to lie even today. One thing we can count on, is that the truth is usually, often, mostly or always very far away from what TEPCO initially reports.

Where is the verification by outside investigative journalists not tied to the nuclear industry? Who is protecting the public interest? Who is watching out for the global village and the billions of people globally who keep breathing in the hot particles from Fukushima even to this day?

Where is the reporting about the specific levels of radiation in the dumped radioactive waste water coming directly from their water 'filtering' operations; at 12:16 into this next video? Then look at the huge amount of water streaming from the canal out of Fukushima at 13:35. They say that they are 'checking' this water before releasing it.. But who is checking the radiation levels, before they dump this into the ocean, via the green line?


In the video above, TEPCO makes the claim that no radiation is being found by them in the ocean outside of the plant. Who is confirming this claim, made as of Sept. 2013? A few months before this, there were stories of wildly increasing radiation levels and all of this going into the ocean, plus high levels of radiation being found in the fish and in ocean water. Now, a few months after this out of control emergency with everything going downhill fast, all of a sudden, with no changes in anything, everything is back to normal and 'safe'. The radiation emergency completely disappeared, fish are safe to eat, the ocean is radiation free, and everyone is happy, according to the TEPCO happy news channel. Do you believe it?

Because no outside investigative media is allowed free reign at Fukushima, truth is NOT happening yet, amongst any of the present players in this deception and lie riddled nuclear shell game. The world knows about 1% of what is really going on at Fukushima Daichi and in the nuclear industry in general.

99% of what happened or what is NOW happening at Fukushima is still hidden away, in deep dark secret closets that NO ONE is allowed to talk about. And the new state secrets bill that was just passed will just shove these secrets deeper into the closet, when what is needed is an airing out and truth telling.