Criminalizing defence of the land and water 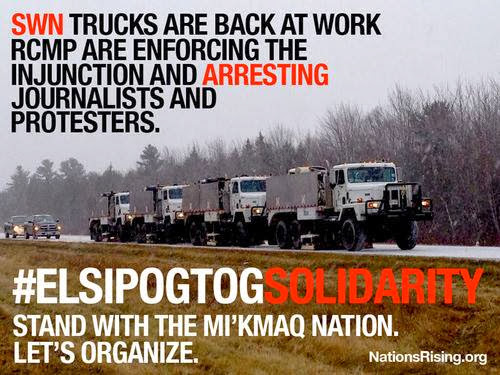 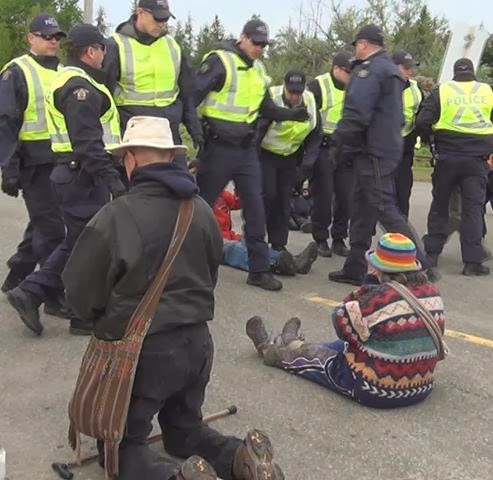 
CBC reports, "SWN Resources Canada wants a court to order a permanent stop to protesters blocking its shale gas exploration work, and is urging a judge direct the RCMP to immediately enforce any injunction granted by the court. ...The application for an injunction, which has the provincial government's support, is scheduled to be heard on Friday morning."

The injunction seems to have two components. For the broader public, "It wants the court to ban protesters from a 250-metre 'safety zone' in front of and behind its trucks, as well as 20 metres back from the side of the highway." For several individuals, "SWN is seeking a permanent injunction against six protesters it has managed to identify, as well as several others who are allegedly wearing camouflage and hiding their faces."

The news report notes, "The company has also launched a lawsuit, filed in the New Brunswick Court of Queen's Bench on Wednesday, against some of the protesters (five people and other 'unknown individuals'), accusing them of illegally interfering with SWN’s work. ...It accuses the group of stopping SWN trucks, threatening and harassing staff, and damaging equipment and vehicles. ...The lawsuit is seeking damages, but a statement of claim does not say how much."
APTN adds, "The notice of injunction was served on the demonstrators Thursday at the latest incarnation of their anti-fracking camp just off Hwy 11, about 46 kilometres north of Elsipogtog. ...The injunction request was filed Wednesday with the New Brunswick Court of Queen’s Bench.... Arguments on the injunction are set for 9:30 a.m. in Fredericton Friday."

Just one month ago, Justice George Rideout ruled against SWN stating that there were no grounds to extend a temporary injunction first issued on October 3 (and renewed on October 10, but which expired on October 21). The CBC reported at that time, "(The judge) wrote that, even in the original injunction, people always had the right to voice their objections and carry 'limited signage', so long as they didn't impede SWN's access to highways, roadways and its operations."

It remains to be see how much consideration will be given to the argument recently made by lawyer Chelsea Vowel in the Toronto Star. She wrote, "The Mi’kmaq never gave up legal rights to their land or resources. Canada does not own the land that the people of Elsipogtog are defending. This is not conspiracy theory, or indigenous interpretation. This is Canadian law, interpreted by the Supreme Court of Canada, applying Canadian constitutional principles."


She further explains, "In 1997, the landmark Supreme Court Decision in Delgamuukw finally clarified that even under Canadian law, Aboriginal title to most of the land within British Columbia’s provincial borders had never been extinguished. This ruling had immediate implications for other areas of the country where no treaties ceding land ownership were ever signed. One day, Canadians woke up to a legal reality in which millions of acres of land were recognized as never having been acquired by the Crown... In 1999, the Supreme Court passed down another judgement confirming that the Peace and Friendship Treaties of 1760-1761 did not cede land or resources."

The Council of Canadians respects Aboriginal title, has participated in and supported the ongoing protests, provided material aid to the protest camps, and has contributed to the bail fund to help release those arrested at the RCMP raid on October 17.