When I looked for the original article I found that it has disappeared from the Net, so I am reproducing this for the historical record

EPA RADnet Reports Show Plutonium in US since March 18th 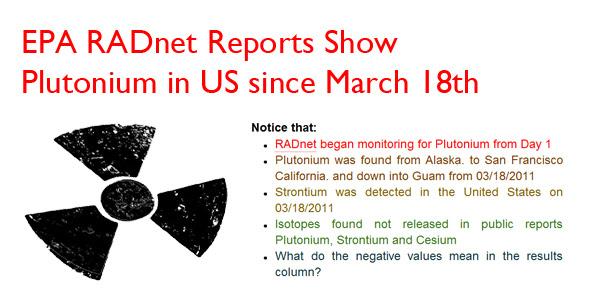 We found a more complete RADnet dataset for various radioactive isotopes we had previously not encountered.
[...]
Recently while searching the EPA RADnet database for radiation reports, we found a link to the main database.  It included the RADNet monitoring data  for many isotopes not released in the public reports.
Notice that:

Update 12:01 EST April, 22nd 2011
Here are the results for Plutonium.
All results were detected by actinides extraction chromatography as part of either the RadNet Radiation Network Alert or the Fukushima deployables.
To fit the data on the web page I have moved some redundant columns .
I removed the half-life column which the EPA results report as 24131 years for Plutonium-239 and for 87.75 years for Plutonium-238.
I have also removed the unit column as all amounts reported are pCi/m3 or picocuries per cubic meter.

Update 1:29 EST April, 22nd 2011
I will be posting the cesium results in 3 seperate tables – Air, Milk and Rain so the data can be fit here.
All Cesium samples were detected using Gamma Spectrometry.

All units for cesium air samples are pCi/m3.

All amounts are pCi/L.

All amounts are pCi/L.
I have put a Google Docs Spreadsheet of the Plutonium, Strontium, And Cesium Seperated By Air, Rain, And Milk online which is basically the tables above.
Lucas has also put a Google spreadsheet of his EPA radnet search showing where Plutonium, Strontium, and Cesium have been detected online with all of the original columns from the EPA data.
I will update this post with a more user-friendly view of the EPA result data.
In the mean time, you can get to the EPA data yourself, though it is rather confusing.
Again h/t to Lucas for making the original discovery that the EPA had hidden this data from the public results they have been compiling.

Help get the Corporate media to report on this story.


Radiation in Northwest US Rainwater from Fukushima

Posted by seemorerocks at 21:05