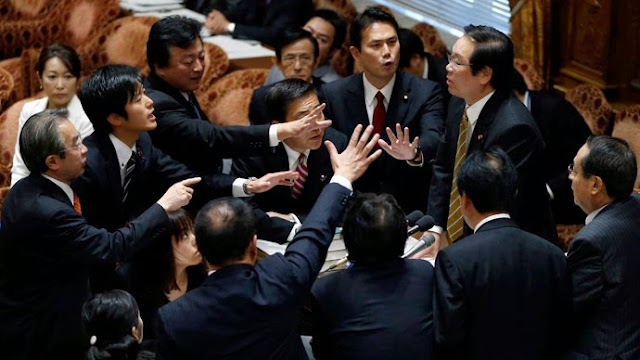 Japan’s Diet (parliament) passed the bill, which is aimed at expanding the definition of a state secret and place increasing penalties upon anyone deemed a leaker. The move will apparently prevent media accessing information on four sensitive areas: defense, diplomacy, counter-terrorism and counter-espionage.

The information will be further divided into 23 types. Top officials from all departments would have the power to declare issues ‘secret’. The ‘secrets’ could then be kept classified for up to 60 years.

Journalists and other private sector parties could also receive up to five years imprisonment if they are found to be using ‘grossly inappropriate’ means to acquire information.

Such restrictions could spill over into the nuclear industry. The topic is particularly sensitive in the face of March 2011’s Fukushima nuclear disaster, which drove over 160,000 residents from their homes.

“Information on the vulnerability of nuclear power plants could be classified as special secrets, along with plans on how to guard the plants,” Yutaka Saito, a lawyer and a member of the Japan Federation of Bar Associations' task force on the bill, told Reuters. 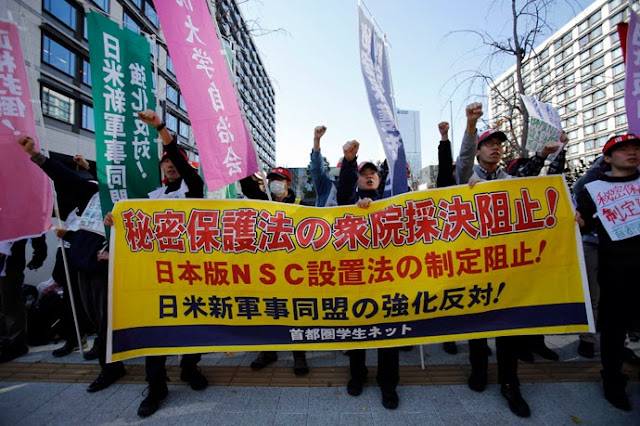 Protesters raise their fists as they shout slogans during a rally against the government's planned state secrets act in front of the parliament building in Tokyo November 26, 2013. (Reuters/Toru Hanai)

“If so, anyone who has blown the whistle from the inside to warn of the danger of nuclear power plants will be punished,” Saito said.

The bill was adopted through majority vote by the ruling coalition after Prime Minister Shinzo Abe's Liberal Democratic Party (LDP), New Komeito, and the Opposition Your Party all agreed to revisions last week to gain the votes of small conservative opposition parties.

The move comes despite overwhelming public opposition, and after members of opposition parties - including the Democratic Party of Japan (DPJ), the Japan Restoration Party, the Japanese Communist Party and the People's Life Party – said that insufficient debate had been conducted prior to the vote. Critics allege that changes to the bill were merely cosmetic, and requested that it not be brought to vote. Regardless, the legislation was approved after only a few hours worth of delay.

Nearly 63 percent of respondents to a Kyodo news agency survey expressed concerns about the bill last week, and its discussion triggered protests by hundreds of people outside of parliament on Tuesday. Thousands gathered in a Tokyo park the previous week to rally against the bill.

“We revised the proposal as much as possible to address the concerns held by the public,” Gen Nakatani, an LDP director, said following the vote, while Atsushi Oshima, a DPJ director declared that it had been a “defeat for the legislative branch.”

The bill has now been sent to the Diet’s Upper House for consideration, where it will likely pass without any difficulty. The LDP and its junior partner hold a solid majority in both houses.

“Clearly, there will be a chilling effect on access to a wide range of information,” said Meiji University law professor, Lawrence Repeta, said. “It is clearly aimed at news media to block reporting in a way that may be critical of the government on a wide range of sensitive issues,” he added.

Abe has stated that the law is vital in the development of a US-style National Security Council to coordinate foreign policy and security while negotiating with allies such as the US over the possible sharing of information.

“My biggest concern is that it would be more difficult for the people to see the government's decision-making process,” said Kyouji Yanagisawa, a former defense official who was in charge of national security in the Prime Minister's Office in 2004-2009. “That means we can't check how or where the government made mistakes, or help the government make a wise decision.”