Snow and ice are forecast for the northeast of the United States as a deadly storm that started on the West Coast last week gathers steam and powers toward the East in time for Thanksgiving.

The National Weather Service warned that the storm would almost certainly upset holiday travel plans for those hoping to visit loved ones in the mid-Atlantic and northeast.

"The timing of the storm couldn't be worse," said Chris Vaccaro, spokesman for the weather service headquarters in Silver Spring, Maryland. "We are seeing numerous threats as the storm is beginning to develop and intensify."

Vaccaro said heavy rain and high winds would impact travel by air and road in the northeast and mid-Atlantic, and that the weather in that part of the country could have a ripple effect on airports with departing and originating flights elsewhere.

Heavy rain and breezy conditions will strike the East Coast from the Carolinas to the northeast, with ice and snow a possibility in the Appalachians, western Pennsylvania and western New York. 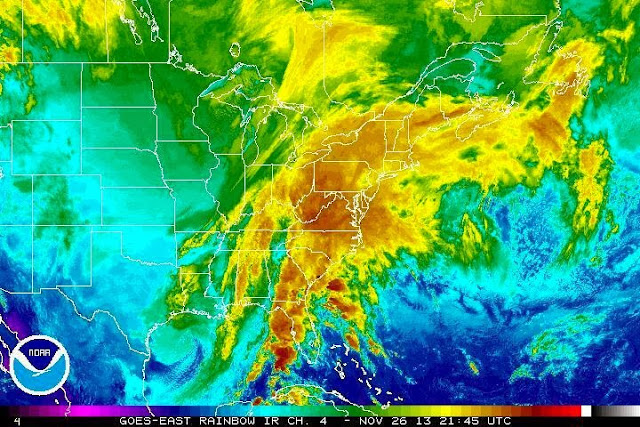 The storm system, already blamed for at least 11 deaths, could also spawn an isolated tornado in the Florida Panhandle.

The Southeast, meanwhile, is set to suffer soaking rain in the coming days, primarily in Alabama, Tennessee and Kentucky.

The large system has already struck parts of Arkansas, Oklahoma and Texas, but with temperatures creeping above freezing the outcome was less dramatic there than forecasters had feared.

The storm sprung out of the West and has been blamed for at least 11 deaths, half of them in Texas. It limped across Arkansas with a smattering of snow, sleet and freezing rain that didn't meet expectations.

"It's just really cold. We had drizzle but no snow," said Courtney O'Neal-Walden, an owner of the Dairyette diner on US 270 in Mount Ida, Arkansas. "You can see (ice) on the power lines but the roads are fine."

She said ominous warnings of a wintery storm kept most people inside - although schools remained open - and few stopped by the diner for Monday's US$5.99 special of popcorn shrimp, fries and a medium drink.

But the system packed plenty of punch as it moved eastward.

John Robinson, the warning coordination meteorologist at the National Weather Service in North Little Rock, said winter storm warnings were issued for parts of the eastern half of the United States through Wednesday afternoon.

Some of the country's busiest airports - New York, Washington, DC, Philadelphia, Boston and Charlotte, North Carolina - could see big delays at one of the peak travel times of the year.

This holiday will likely see the most air travellers since 2007, according to Airlines for America, the industry's trade and lobbying group, with the busiest day being Sunday, an estimated 2.56 million passengers.

Wednesday is expected to be the second-busiest with 2.42 million passengers.

Ninety percent of travellers this week will drive, according to AAA, and an estimated 38.9 million people - 1.6 percent fewer than last year - are expected to drive 80km or more from their home.

In New Jersey, officials advised travellers to check with their airlines and reduce speed on highways as a winter weather advisory was set to take effect shortly before midday across the state's northwest areas.

Meanwhile, forecasters were predicting 12 to 20cm of snow in Buffalo, more in the northern Adirondacks, and a winter storm watch was posted for central New York state with heavy rain expected in parts of the Hudson Valley.

In the nation's capital, federal agencies opened though the National Weather Service issued a winter weather advisory for the northern and western suburbs of Washington, DC, and Baltimore, amid forecasts of a light mix of snow, sleet and freezing rain that could be topped off by heavy rain.

The US Office of Personnel Management, which sets leave policies for 300,000 federal workers in Washington, said that while government was open, employees could take unscheduled leave or unscheduled telework.

Jeff Smidt hopes to travel from his home in Toronto to visit his family near Boston. He plans to drive if he cannot fly.

"My understanding is that I'm travelling at like the worst time ever," Smidt said. He tried to change his JetBlue reservation to get on an earlier flight but was told the airline wasn't waiving any change fees yet.

"Worst comes to worst, it will be an eight-hour trek down Interstate 90," he said. 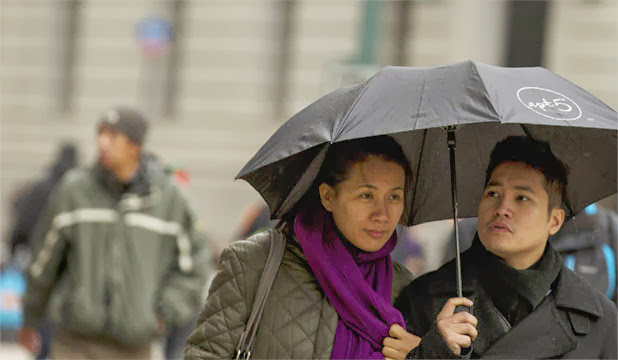 MetService has issued a severe weather warning for eastern parts of the North Island, including the Coromandel Peninsula and Bay of Plenty.

The warning also extends to Marlborough at the top of the South Island.
MetService says a moist, unstable, northerly flow covers the northern half of the North Island with heavy showers and possible thunderstorms expected today.

Intense rainfall is possible in Coromandel, Bay of Plenty and Gisborne on Wednesday night.
Posted by seemorerocks at 13:20