There have been mass protests on beaches down the west coast of the North Island, as well as on the east coast and in the south island throughout the weekend. Anodarco is set to start drilling later today. 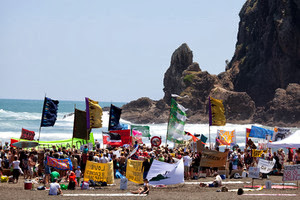 Anadarko had intended to begin drilling 185km off the coast of Raglan on Thursday or Friday but has been shadowed by a flotilla of six protest vessels.

One, the Vega, remains within the 500m exclusion zone.

Among those on board the 11.5m ketch are Greenpeace NZ chief executive Bunny McDiarmid and former Green Party co-leader Jeanette Fitzsimons.

Anadarko has said that the presence of the protest vessels would not prevent the drilling from going ahead but Greenpeace spokesman Steve Abel did not believe this.

"At the time they arrived [on Tuesday] they said they intended to commence drilling operations imminently but they haven't.

"Our understanding is that the presence of the Vega is stopping them from drilling and we don't believe they're going to drill while the Vega is there."

Mr Abel said neither police nor Maritime New Zealand had contacted Greenpeace about the Vega being within the exclusion zone.

Anadarko New Zealand corporate affairs manager Alan Seay said last week that the Bob Douglas was on track to begin drilling, despite the presence of the protest vessels.

Today Mr Seay told TVNZ's Breakfast the drilling was set to be under way by midday.

Protesters had stayed inside the safety zone and had yet to have an impact on the company's drilling operations but drilling would go ahead regardless.

"There's always a risk of something going wrong if somebody goes into a safety zone - it's like having an unauthorised person walking into a construction site," he said.


Government can handle oil protesters - Key
Prime Minister John Key says there are measures the Government has up its sleeve to handle protesters who might try to delay the start of drilling by oil giant Anadarko off the coast of Raglan. 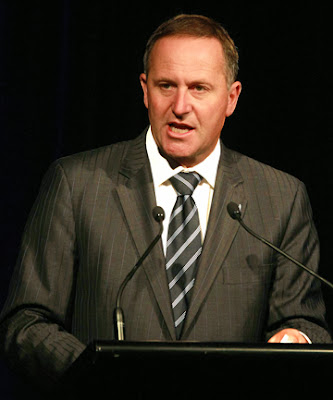 But he has refused to go into what those measures might be.

Protest vessels have so far prevented Anadarko drilling ship the Noble Bob Douglas from breaking ground below the West Coast of the North Island.

One GreenPeace vessel - the Vega - has remained inside the 500 metre exclusion zone, but Anadarko has said it would begin drilling today.

Anadarko's licence began on November 15 and ends on February 14 and it is an offence for any vessel to get within 500 metres of the drillship.

On RadioLive this morning, Key refused to say whether or not the military would by called in to push the protest boat back outside the exclusion zone.

Key denied there was a large number of people in New Zealand worried about the safety of deep-sea drilling.

"There are people who are genuinely confused by the data and what they're told," he said.

This was after more than 3000 people showed up at coastlines across the North Island yesterday, to show their opposition to deep-sea drilling in New Zealand.

"But I think that risk is extremely remote.

"Technology has changed a lot, we have higher standards in New Zealand. I've seen what it would actually take for there to be a major problem, and there's an awful lot of things that would have to go wrong at the same time."

Support for the Vega, and the flotilla, has grown in recent weeks, with around 700 people turning out for a Banners on the beach protest at Raglan on Saturday, one of many run on the West coast of the North Island.

Kawhia tribe Ngati Hikairo attended the Raglan protest and another was held at Aotea Harbour.

More than 1000 people attended the deep sea oil protest at Auckland's Piha Beach, 400 at Muriwai Beach and 500 at Bethells Beach as the land-based demonstrators threw their support behind the protest flotilla.

Raglan Maori are also among those opposed to Anadarko's presence.

Tainui hapu environmental spokeswoman Angeline Greensill said they were considering legal action after the arrival of the gargantuan drillship on Tuesday.

The hapu has threatened to issue a trespass notice on the oil drilling company, which it says is drilling in Tainui's customary fishing waters.

"They are actually within our customary fishing area of the whole west coast, so we're just contemplating going out ourselves. They need to be served notice that they are trespassing on our rohe moana (ocean boundary)."

Greensill, a former Mana Party candidate, said discussions were under way between west coast Maori on how best to to protect their traditional food source.

She complained Raglan Maori were not consulted before the Government issued Anadarko a licence to prospect for oil in 1500 metres of water.