November 26, 2013 – KUWAIT  – The national seismic network at Kuwait Institute for Scientific Research (KISR) said on Tuesday that it had detected seismic waves in some of the network’s stations, at 10:06 a.m., but no activity that classifies as an earthquake. The network’s press release indicated the investigation into the observation showed that the readings were caused by rock ruptures. It further explained that a seismic wave is a wave of energy that travels through the Earth’s layers, and could be the result of an earthquake, explosion, or a volcano that imparts low-frequency acoustic energy, and also some types of human activity. On October 29, 2013, the region of Kuwait was hit by a 3.7 magnitude tremor. -KUNA


5.5 mag quake rattles Lima: LIMA, Peru (AP) — A moderately strong earthquake has shaken Lima but no damage or injuries have been reported. The U.S. Geological Survey says the 5.5-magnitude quake was centered about 72 miles southeast of Lima and was 46 miles deep. Peru’s National Geophysics Institute measured the quake at 5.8 magnitude and said it hit at about 3:07 local time (20:07 GMT). The quake struck in two jolts, the first of longer duration, and some office workers in Lima filed out of buildings into the street. -HP

The 'abyss': Sinkhole leaves villagers in Bosnia in shock
SANICA, Bosnia-Herzegovina — Just outside the rustic village, children fished in a tranquil pond bobbing with green algae and lined with willow trees, as cattle grazed nearby. 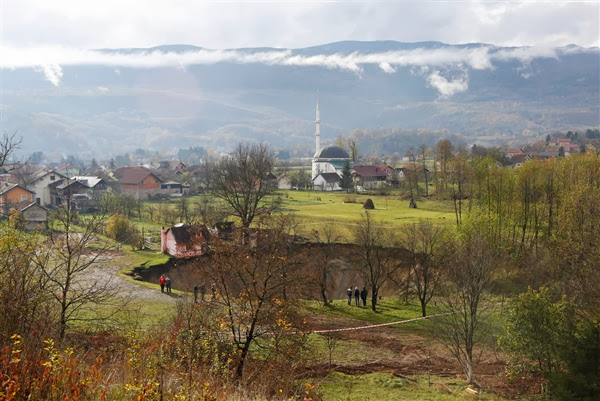 Now, Rezak Motanic gazes in disbelief down a gigantic moonlike crater where the pond used to be. It's like something from a science fiction movie: a sinkhole swallowed the water, the fish and even nearby trees.
Residents of the remote village of Sanica, Bosnia, have been trying to explain how a sinkhole formed, sucking in trees and fish from the pond and leaving behind a mysterious crater.
"I sat here only a day before it happened, sipping plum brandy," Cemal Hasan said. "And then, there was panic. Fish were jumping out, and a big plum tree was pulled down like someone yanked it with a hook."
The villagers of this remote northwestern Bosnian village have been in shock since the pond vanished two weeks ago. Their pond was some 20 meters in diameter and about eight meters deep. Now, the "abyss," as the villagers have dubbed the crater, is some 50 meters wide and 30 meters deep — and growing.
Scientists say it is not uncommon that ponds and small lakes suddenly disappear. They say it could be caused by drying underground water currents, or changes in soil drainage due to irrigation.
The Sanica villagers, however, are having none of the scientific explanations.
"It could have been a giant cave that opened its doors," offered Milanko Skrbic. "Or a volcano."
Another popular theory — one that experts dismiss along with the others proposed by townsfolk — is that fish could have triggered the explosion of one of several World War II German bombs believed to have been thrown into the pond by an old woman after the war.
"She herself died when one of the bombs exploded in her arms," Cemal Hasan said as he stood on the edge of the "abyss."
Another spooky explanation: The owner of the pond took it with him when he died about a month ago.
"Only days before Hasan passed away he said: 'I'll take everything with me when I die.' And that's what he did," Motanic said. "His daughter saw him walk on the lake the night he died."


Husein Nanic said it could be a sign that the end is nigh: "All sort of miracles happen before the doomsday," he said.
Posted by seemorerocks at 19:46