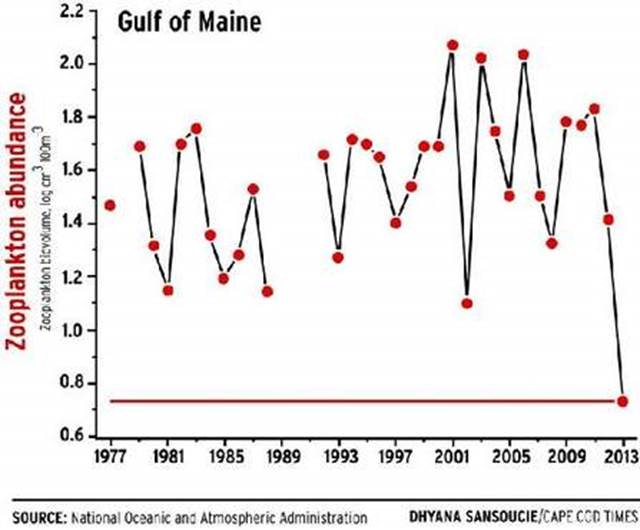 WOODS HOLE — A marine ecosystem expert is warning that the effect of changes in water temperature and plankton blooms may have ripple effects up the food chain.


"We believe that the changes in the timing of warming events have affected plant and animal reproduction," wrote oceanographer Kevin Friedland of the Northeast Fisheries Science Center in Woods Hole in an ecosystem advisory released last week.


Friedland's research shows that, for the first six months of 2013, ocean temperatures from Cape Hatteras to the Canadian border — the area known as the Northeast Shelf Large Marine Ecosystem — did not reach the record highs of 2012, which had the highest ocean water temperatures recorded in 150 years. But it was still pretty warm in the Northeast, with sea temperatures the third-warmest on record.


But the Northeast shelf saw an even more ominous record this year, with scientists observing the lowest-ever spring plankton bloom. Phytoplankton is the base of the food chain. It converts the sun's energy and the nutrients stirred up by ocean storms and currents over the winter into a rich bloom of microscopic plant life as the days lengthen in the spring. The phytoplankton are eaten, in turn, by microscopic animals known as zooplankton that are food for everything from fish larvae to whales.


Many species of fish tie their reproductive cycles to this plentiful food source but the timing of the blooms appears to be shifting. Since 2006, increase in ocean temperature change that signals the transition from winter to spring, which was relatively constant from 1982 to 2006, has occurred two weeks earlier.


This past summer, Friedland was one of the authors of a study that linked changes in ocean temperature and water circulation to a decline in zooplankton in areas frequented by cod. Friedland believes this connection might help explain why Atlantic cod still remains at low population levels despite nearly 20 years of increasingly harsh fishing regulations.


Friedland noted that the shift in temperature and the plankton bloom were not uniform across the Northeast region. Waters in the Mid-Atlantic cooled to a greater degree than those further north and an atypically strong plankton bloom occurred off the coast of Long Island, far south of important cod stocks and most feeding right whales.


Michael Fogarty, the ecosystem assessment program chief at the Northeast Fisheries Science Center, said scientists are still trying to figure out exactly what the changes and the low plankton bloom mean.


"It is potentially of concern, but it's too early to go around ringing alarm bells based on one year," he said.


Up until this year, surveys had shown the zooplankton population on an overall upward trend, despite year-to-year variations.


"For plankton, there is no trend that is alarming yet," Fogarty said.


But the mismatch between the timing of the bloom and other species' feeding habits is a different, legitimate concern, Fogarty said.


"We were already highly worried about right whales," he said. "Having an insufficient food supply affects their ability to reproduce."